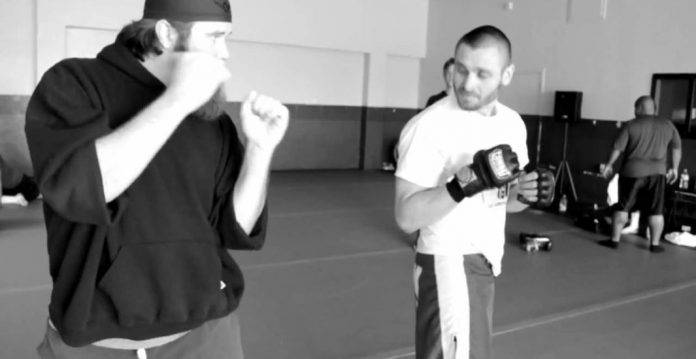 CST Head Coach Brandon Jones began his martial arts studies at the tender age of eight. He spent an itinerant youth searching from art to art until finally devoting himself to the study of Kung Fu San Soo. He also began training in boxing and Muay Thai. He sparred with former champion Kathy Long while training for the Golden Gloves, and he competed in over 30 amateur fights, both sanctioned and unsanctioned, winning 9 of those fights by knockout.

After moving to San Francisco, Brandon began training with Prof. Ralph Castro in Shaolin Kenpo, while also pursuing studies in Tae Kwon Do and Hwarang Do. He eventually relocated again, this time to Los Angeles to train with Sifu James McNeil, a highly respected Chinese martial artist.

His tireless pursuit of knowledge led him to train with many people in a wide range of arts, and to earn several black belts and teaching certifications along the way.

In Los Angeles Brandon was first introduced to the internal martial arts, including Xingyiquan, Chen Style Taijiquan, several esoteric forms of Iron Body and Iron Palm, Five Animal Shaolin and Splashing Hands Kung Fu. He dedicated himself full-time to the practice, and several years later opened one of the first charter schools in Northern California. He also continued to broaden his training with masters in the arts of Shotokan Karate, Uechi-Ryu Karate, Burmese Bando and others, earning multiple black belts and instructor certifications.

Years ago, he opened his own martial arts school in northern California, where he taught the classical Chinese Internal Arts of Xingyi , Tai Chi, and Western Boxing, as well as several esoteric systems of meditation and chi kung.

His training philosophy during that time was simple:

Train Harder and Do More than everyone else…
Sadism is requisite…
Contact is good.

In the late 1990’s Brandon came across Coach Scott Sonnon’s “Grappler’s Toolbox” video series. He knew immediately that this was what he had been searching for. The series had a profound impact on him; he knew he could no longer teach in the same way. All of his questions and ideas, all of the nagging doubts that he had long harbored about traditional training, were confirmed by Coach Sonnon’s work. He dropped all of his traditional training to devote himself fully to exploring this exciting new method. 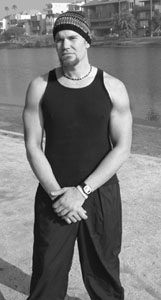 Brandon decided that a change was in order. He wanted to continue his studies of human combat while testing his decades of accumulated skill in realms outside the sportive ring. He decided to enlist in the United States Navy with the intention of becoming a Navy SEAL. He spent 8 months of preparation time training full-time towards this goal. Upon enlistment, he topped out the military entry exams and was convinced to accept the job of Cryptologic Technician. He was only informed later that this classification disqualified him from SEAL training due to its rarity and specialization.

Brandon was assigned to the USS Valley Forge and served in the Persian Gulf War. He spent the remainder of his 6 years of service visiting exotic tourist destinations like Ecuador, Panama, Colombia, and Bahrain. He was also recommended for BUDs Instructor duty despite not being a SEAL.

Brandon attended his first instructor training with Scott Sonnon in 1999, became a graduate of the first Circular Strength Training Instructor seminar (Alpha Cadre), and has attended nearly every certification since. As a Faculty Head Coach, Brandon has applied his extensive martial arts and boxing background to the creation of RMAX FlowFighting, an effort which garnered him and the other four members of the RMAX Faculty acceptance into the International Martial Arts Hall of Fame in 2006. In 2008, Brandon was appointed Director of RMAX FlowFighting by Founder Scott Sonnon, and took over sole responsibility for the continued development of that system.

Brandon is the author of Going Ballistic: Circular Strength Training for Boxing, star and creator of the acclaimed RMAX Powered Internal Martial Arts Vol. 1 DVD, and creator of the soon-to-be-released FlowBox book and DVD series. He works with UFC fighters, professional kickboxers, a British super-heavyweight stickfighting champion, law enforcement officers, and athletes from a wide variety of non-combat sports.

Train smarter and more efficiently than everyone else…
…contact is STILL good!
…and a little sadism goes a long way.