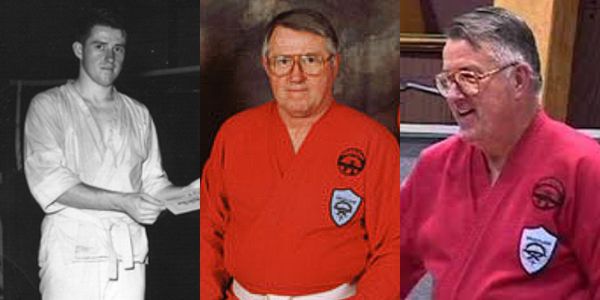 Finally, my brethren, be strong in the Lord, and in the power of his might. Put on the Whole Armor of God, that you may be able to stand against the wiles of the devil.
Ephesians 6:10-11

Soke Riedner began his martial arts training while in the military in Japan in May of 1962. Entering a Motobu-Ha Shito Ryu class he became one of the few American students of Kayo-San, who was an NCO in the Japanese Air Force and close friend of Soke Shogo Kuniba. In 1965 Soke Riedner became only the second American to receive his Black Belt from Soke Kuniba, from whom he learned most of the kata of the Motobu-Ha Shito Ryu system as well as Kobudo (weapons), and Iaido (Japanese Sword).

Returning to the States in 1965 Soke Riedner continued to practice and began teaching a few private students while attending college, retaining the Motobuha Shito Ryu system as closely as possible.

In the late 1960’s, he studied Hakkoryu Ju-Jitsu under James A. Bento of Akron Ohio and served as a representative for the Hakkoryu Martial Arts Federation. During this period Soke Riedner received his 2 Dan (2nd Degree Black Belt), in Shito Ryu and a 4th Dan in Hakkoryu Ju-Jitsu.

During the mid 1970’s, Soke Riedner trained in Kamishin Ryu with Soke-Dai Harold Martin. In 1975 he received a 3rd Dan in Karate from Dr. Roy James Brown, and 4th Dan in 1978 in the “Aka Ryu Shakai Kempo” style.

In 1989 Sigong Andrew Tamper, inheritor of the Yee Chong system issued his personal recognition of Soke Riedner. He also received a 2nd Dan in American Goju in 1982, and 1st Dan in Isshinryu in 1991.

Besides his martial arts training, Soke Riedner also pursued an academic career, earning his B.A. and M.A. from Bob Jones University, Another M.A. from Columbia Bible College, and finally his M.Div., PH.D. and L.H.D. from Great Plains Baptist College.

Soke Riedner is still very active in the martial arts, heading the Christian Black Belt Association and the Shiho Karano Kai International from the headquarters in Anderson, Indiana, as well as running several martial arts schools and touring the country doing instructional clinics at Shiho Karano schools, and training and testing for his personal students.