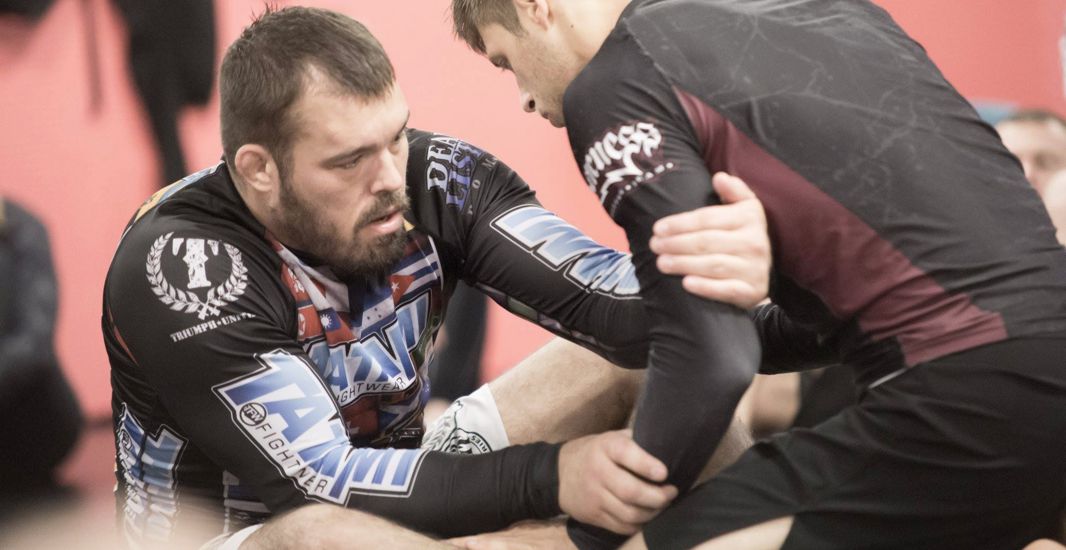 Dean Lister grew up in a military family and lived in such places as Venezuela and Panama, as well as several areas in the United States before his family settled in San Diego for Dean’s high school years. Dean was a high school division wrestling champion and shortly after high school, he became interested in Brazilian Jiu Jitsu. Dean was already U.S. National Sambo Champion at this time. He took an introductory class with some wrestling teammates at Fabio Santos Brazilian Jiu Jitsu Academy in San Diego. Dean was already familiar with the concept of groundwork but he found a new challenge in Jiu Jitsu, a unique sport that includes self-defense moves and punches.

It is the depth of this sport that keeps Dean’s dedication and commitment to his training at an optimum level. He believes that practicing this sport reveals the true character of each participant by showing courage, patience, honesty, discipline, innovation, and integrity. Dean also loves the challenge involved in practicing a sport that is constantly evolving. He is known for unstoppable foot locks and is always working to modify and refine existing moves and create new moves that will benefit him in competition and that will enhance the effectiveness of Brazilian Jiu Jitsu.

Dean has competed in Brazilian Jiu Jitsu since 1996, starting just 6 months after he began training. He quickly made a name for himself in the sport and since has earned a respectable reputation as a fierce competitor.

In the mixed martial arts event, King of the Cage, Dean was ranked as the # 1 Middleweight and defended his Middleweight World Champion title several times.

Dean was an Abu Dhabi invitee in 2000, a huge honor considering that the host of this contest, the prince of Abu Dhabi, selects only the top 16 fighters of each weight class from Olympic wrestlers, world-level Sambo fighters, and world-level Brazilian Jiu Jitsu fighters to compete.

In 2002, Dean won the North American ADCC where he was also selected as the Tap Out (MVP) Fighter of the Night.

Dean returned to the Abu-Dhabi tournament in 2003 where he defeated 4 of the best grappler’s in the world consecutively (3 by submission) to set a tournament record and become the Absolute Champion. Most recently, Dean became the 2005 Abu Dhabi Superfight Champion.

Dean’s record includes 111 wins and 12 losses, with over 90 of these wins coming by submission. In MMA competition Dean has never been knocked out or submitted but all his victories have come by submission.

Instruction
Dean began instructing for Fabio Santos in 1997, and in 2000, Dean traveled to Brazil and trained at the world-renowned “Top Team” Academy for Brazilian Jiu Jitsu in Rio de Janeiro. Dean teaches both beginner and advanced students at The Boxing Club in San Diego. He begins class by going over movements essential for mastering Brazilian Jiu Jitsu such as sweeps, takedowns, and submissions. These moves are applied during “free mat” time where students are matched with partners of different sizes and skill levels to practice what they have learned. Dean believes this is the most important part of the class because it mimics a realistic one-on-one combat situation, which prepares students to defend themselves on the street.

Future
Dean is a Pride FC and Pride Grand Prix MMA veteran but is now looking forward to his upcoming UFC bout against Alessio Sakara. That fight will be part of UFC 60 and is scheduled for May 27th at the Staples Center in Los Angeles.

Dean plans on being involved in Brazilian Jiu Jitsu as long as possible, as both a competitor and as an instructor. He hopes that this involvement will oblige him to travel to Brazil and other South American countries, as well as to Europe.