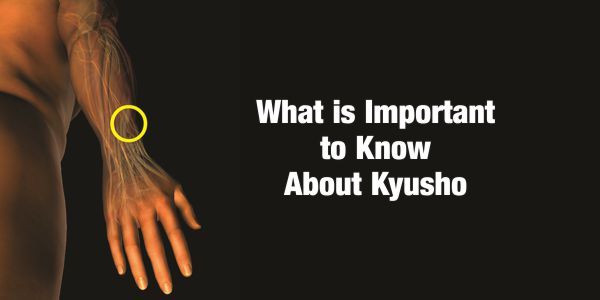 So what is important for an individual to know who wants to excel in Kyusho:

1. Know the target inside and out. This seems like common sense especially for Kyusho practitioners, but is it really? Do you know if you are hitting a nerve, a blood vessel, an organ, or another vital functional structure?

2. Do you know the exact location of the point not just on the skin, but deeper where the target really is and the surrounding protective structures?

3. Do you know the best way to access the structure unimpeded? Getting between muscles, tendons, bones and other covering, underlying or adjacent structures?

4. Do you know how the eyes, ears and other body parts factor into Kyusho?

5. Do you know what voluntary or involuntary physiological reactions are facilitated via Kyusho targets? 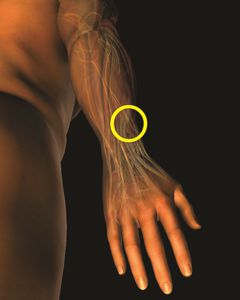 All of these questions and myriads of others cannot be explained by merely looking at acupuncture charts, in fact you would do yourself a great service by not calling the targets by TCM point names. They are not the same thing; sure some of them are near the acupuncture point designated area, but not the point itself. So if you use this paradigm it is based on false premise and consequently cannot lead you to the full truth.

If you really look at what you are doing, what actual structures are the targets as well as how to physically reach them for maximum affect you will know Kyusho.

Let’s take one acupuncture point (LI-6), just to illustrate the difference true knowledge over the false paradigm of Traditional Chinese Medical nomenclature for Kyusho, (not reflective of the whole healing aspects).

LI-6 is located on the upper outside aspect of the forearm. Now the TCM paradigm would have this “target” very specifically measured to a very specific and small measured area. The Kyusho practitioner is to be able to pinpoint this target in fast, spontaneous and stressful combative need. Although possible, it would be improbable. This is the major reason most “Martial Artists” and “MMA” stylists do not accept it fully (although they miss a huge efficiency and affectivity potential).

Now in truth the target is larger, deeper and affected in a completely different manner than an acupuncturist utilizes the point they named.

First and foremost we must understand that we are striking a nerve and tendon, not just a nerve or tendon. This is important as nerves will react and cause both similar and different physiological reflexive as well as reactive responses. It will also be a vastly different reflex or reaction than attacking a blood vessel, muscle or organ.  Attacking a muscle the correct way causes a reflexive action due to something called the Muscle Spindle Cell or a tendon at the end of a muscle due to the Golgi Tendon Organ (more on this in later articles).  So it is more of an area than a point and it is possible to get an effect on one or both of those structures simultaneously.

Next we would understand that our area of successful contact is larger and variable in location on each individual depending on their physical structure. Some people will have longer or shorter forearm muscles as well as the wrist muscle covering the nerve by the wrist. And the space between these two tendons varies person to person. In some people the area can be two inches long (much easier to target than the “point” and much more plausible in combative use).

Now that we know what it really is, the area or location, depth and variables, we can then take a drastically different approach in use than acupuncture, (no it is not as simple as using the reverse tactic). We are trying to compress in some way, the nerve and stretch the tendon (in this example), to elicit a functional physical reflex or dysfunctional physical reaction… not just stimulating or calming as in acupuncture (completely different). Ok are you with me so far? We are not hitting a “point”, we are attacking deeper, we have a larger possible area for application and we use it completely differently, so why are people still using the acupuncture names, they are not the same thing!

If you are still not convinced let’s dig deeper, by exposing the incorrect paradigm of elements and cycles.

In acupuncture (and other Oriental healing methods), they rely on using these above mentioned qualities and or conditions for their use. Those Kyusho practitioners that were taught it was valid, necessary and enhance the targets potency have been misled, (not always intentionally, yet sometimes it is). If someone can effectively (or more effectively) cause reflexive or dysfunctional response and reactions without using it, this should be proof enough it is not needed and that entire aspect knowledge is not important and not Kyusho.

But just to argue let’s focus on this LI-6 point. In acupuncture it is said to be a “Metal” point. It works in a “destructive” manner, a “Creative” manner, a “Yin and Yang” manner, a “Diurnal” manner and other manners, so many that it should work on influencing any other point by way of one manner or another. Well if it works this way (universally), why think of it in set pattern needs at all because all nerves that are stimulated, influence the entire system.

The simple truth is any nerve (as example) attacked will affect and weaken the entire body. In acupuncture it affects a part of the body which then cascades to another part, etc. again this is vastly different.

One final question to ask in such a paradigm; is knowing all these cycles really transferable in fast, spontaneous and stressful application?

Thinking of these Kyusho targets as acupuncture points will limit your understanding, knowledge and actual combative skills. The ancient texts on Kyusho and Dim Mak never used the acu-point names, this is a modern and inaccurate paradigm (used to prolong and complicate the study for monetary gain). Once you shed yourself of these conceptions, you will achieve far more, the faster you will do it and the more realistically people will be able to perceive it.

The question now is are you able or willing to take an alternate path? You did it once finding Kyusho, can you do it again finding the true Kyusho?

If you have questions pertaining to Kyusho: No Such Thing as a Pressure Point email Evan Pantazi at: evan@kyusho.com, we may even add it to the next article.

Yin and Yang: The Significance of Gender in Karate Pressure Point...