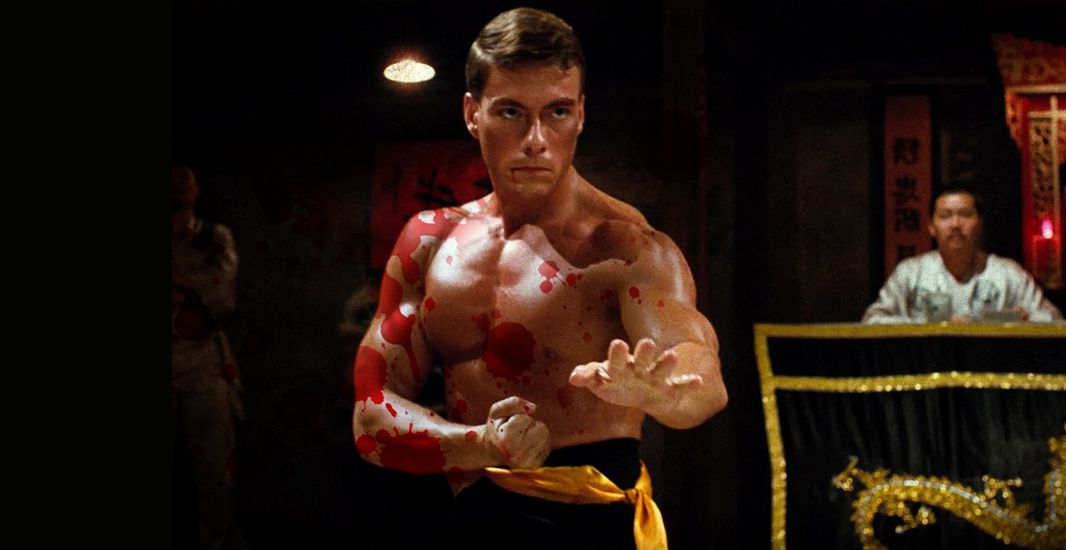 By James Hom ~ Frank Dux strides through the group of students, correcting their pivots and sidesteps in the movement drill he’s teaching. Most know of Dux (pronounced “dukes”) through the film Bloodsport, which gave action star Jean Claude Van Damme his first big break. Few know of the controversy surrounding Dux and his history–or lack of one, as his critics claim.

Bloodsport follows a young Frank Dux, a soldier on leave from the US military to fight in the Kumite– a secret, underground tournament of the best fighters in the world. Through skill, perseverance, and sheer luck, Dux is triumphant at the end. Although tainted by the usual martial arts movie formula–hero trains hard, meets buddy, buddy gets beat up by villain, hero defeats villain and gets the girl–the byline of the movie catches your attention: “Based on a true story.” Could something like the Kumite really take place?

Dux described the Kumite to me as a big “house party.” Basically, said Dux, the tournament was held on a private island in the Bahamas to avoid any legal repercussions. As this was 1975, when the martial arts were still new to most folks and therefore mysterious and potentially “evil,” this seems like a wise move. Fighters would take each other on at a wealthy promoter’s estate. Dux explained how he became champion only after defeating the chosen fighter of ten different promoters, including having to travel to Asia for underground fights.

The controversy surrounding Dux begins with the tale of the Kumite itself. In May 1988, shortly after the release of Bloodsport, Los Angeles Times writer John Johnson blasted Dux and his story, claiming that Dux made it all up.

LA Times Controversy
Johnson’s article sought to debunk Dux’s story of the Kumite and his secret life as a military/CIA operative. Johnson found a North Hollywood vendor stating that Dux’s Kumite trophy wasn’t earned for combat on some tropical island, but was merely ordered and picked up just a few miles from Dux’s Southern California home.

In his interview with me, Dux tackled the controversy head on. “That article made a big deal that the Kumite trophy was fake. But the receipt they claimed was proof didn’t even have my name spelled correctly! They spelled it Ducks: D-U-C-K-S!”

Soldier of Fortune Controversy
Dux got into hot water again in August 1996 when Soldier of Fortune magazine printed the article “Full Mental Jacket,” and a November 1998 article titled “Stolen Valor: Profiles of a Phony-Hunter.” In the articles, Dux was lambasted for falsifying his military record, with photos of Dux in a military uniform that brandishes both Army and Marine medals.

Dux explains that he was the target of a smear campaign by Soldier of Fortune publisher Robert K. Brown–and that he even sued Soldier of Fortune for libel and slander. Dux described how he, Brown, and Rogue Warrior author Richard Marcinko were seeking to launch similar movie projects–and how Brown sought to disparage his two rivals so his own project would succeed. Dux states that he doesn’t claim to be a Vietnam veteran–he feels the confusion is due to him being active in veterans causes. And that incriminating photo? Just a snapshot from a cast party on a movie set–and the uniform was just garb from Central Costumes*.

These controversial articles were simple compared to the fight Dux would later have on his hands: a court battle with his former friend Jean Claude Van Damme.

*Correction: I was later told by David Silverman, Dux Ryu instructor at the University of Southern California, that the party was not a cast party, just a college Halloween party.

Dux vs. Van Damme
Dux’s notoriety was just heating up when he sued the man who portrayed him, Jean Claude Van Damme, in October 1998. Van Damme and Dux were friends–after all, it was the role of Frank Dux that catapulted Van Damme to stardom. Dux was even dating Van Damme’s sister-in-law. But their friendship turned sour as Van Damme’s promises of allowing Dux jobs as martial arts choreographer and fight trainer on the movies Lionheart and Double Impact vanished. The last straw was the release of the movie The Quest.

Bloodsport Revisited
Planned to be the “greatest martial arts film ever,” The Kumite would revisit the story line laid out by Bloodsport but this time with real locations, real budgets, and Van Damme’s then-proven star power. Van Damme promised Dux 2.5 percent of the movie’s gross. Dux penned The Kumite, but the movie was never made.

Later, another writer reworked the script into The Quest. Universal Studios produced it, Van Damme starred in it, but Frank Dux got nothing other than the $50,000 he was paid for The Kumite’s script, and a “story by” credit–and that billing only after complaining to the Writer’s Guild of America. So Frank Dux sued his friend for breach of oral contract.

Legal Kumite
The trial played out as Hollywood court cases seem to do: plenty of accusations, misplaced evidence, disallowed witnesses, and extensive coverage by CourtTV. In the end, Dux lost the suit. Was justice served?

Some pundits, like Hollywood trade magazine Point Of View, raise an eyebrow at how the trial was run. POV’s Jennie and Terrie Frankel write, “The judge karate kicked Dux below the belt with a series of unprecedented rulings that precluded the testimony of any rebuttal witnesses, any impeachment witnesses and all actual eyewitnesses to the deal. Kramer (Dux’s attorney) argued these witnesses were critical to his case, but to no avail.” That’s how things seem to go in Tinseltown.

Colorful Character
Regardless of what’s true or false about Frank Dux, the guy is definitely a colorful character. Some of his claims do sound far-fetched: contributions to the Navy SEAL SpecWar manual, world records for breaking bulletproof glass, his exploits as a spy depicted in his book “The Secret Man”. Yet a lot of what’s true speaks volumes: a comeback from brain surgery and coma, and legions of loyal students.

The controversy surrounding Dux reminds me of that surrounding Dr. Maung Gyi, grandmaster of bando, the martial art of Burma (now Myanmar). Gyi is under fire for falsifying his military record, similar to the allegations brought against Dux. Another famous martial artist and movie star, aikidoist Steven Seagal, has been known to claim affiliation with the CIA and a history of secret missions in shadowy lands.

Perhaps the best way to evaluate these martial artists is on their merits as martial artists. All three are responsible for endowing multitudes of students with martial knowledge. The instructors and students of Dux Ryu that I’ve met, both in person and online, share a zeal for their support of Dux and his style of ninjitsu.

Dux ryu itself is/isn’t considered a legitimate branch of ninjitsu/ninjutsu, depending upon who you talk to. From what I’ve seen, the unarmed techniques are reminiscent of jujitsu–Frank Dux’s first style. Yet like many martial artists who start their own styles, Dux includes elements of other arts.

What’s next for Frank Dux? Besides private training and seminars, Dux is trying to bring the Kumite to pay-per-view television. In a time where the Ultimate Fighting Championship exploded into viewer’s homes and then was kicked off cable TV, this might be a tough sell. But what a story it would be–a tournament had to be secreted underground 25 years ago now broadcast to millions of people. And what if Dux fought again? I’m sure there would be plenty of fans rooting for him.