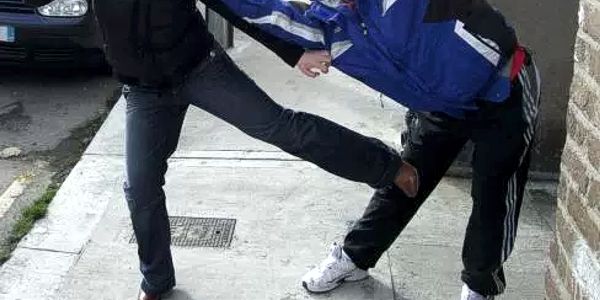 Dear Michael,
A friend who practices traditional karate recently told me that the best defense in a street fight would be sidekicks to my opponent’s knees. What would FusBoxe knowledge say about relying on one physical movement to respond to any attack?
Signed, Kick A. Nee

Dear Kick A. Nee,
I have experienced an abundance of street confrontations: some worked out, others did not. I recently created the following response to the advice of a martial artist on a forum site advising others to side kick their opponents knees. The idea this person is speaking of is sound. However, many, and by many I mean most traditional martial artists, over simplify the initial response, body of conflict and finish of a confrontation.

“I, too, agree to go for the knees, or at least something in that area. However, they are not as effective as many traditional martial artists would like to think. I ask everybody to keep in mind that the design of our knees has not changed in hundreds of thousands of years and supports our weight on multiple types of surfaces. Side impact is not that immediately effective; however, twisting is. I personal have had each leg extremely hyperextend around 9 times. Some of these hyperextensions were up to 90 degrees; in most cases I was able to continue at about 70% of my normal potential.

My combative history expands 20+ years and over 300 confrontations including Wrestling, Ju-jitsu, No holds barred, Full Karate, Boxing, Thai boxing, FusBoxe and street fights. I do not speak from opinion on matters of combat. I only speak proven fact from my experiences. If it does not work stop using it. To me, combat is not a theory, for it has been a life preserver in my past. And if the past is any, it will be in the future.

The latest of the street confrontations took place August 16th, 2006 at 12:30 a.m. at Pete’s Kitchen in Denver. Two skinheads jumped me “without good reason” in the parking lot. Long story short, I ended with a right roundhouse kick to the mouth of the aggressor and a middle leg kick to the other, as he turned to run away.

I would suggest that one be very cautious in the execution of side kicks, long range or short range, as most miss their intended targets and even fewer have the effect one would hope for. The main reason for the caution is that upon a miss of a committed strike, (especially from the side) one exposes himself/herself to the HIGH possibility of a ground battle.Amazingly, many systems believe that they will never need ground technology training. USDS being one example, where I have heard it said, “if you get taken down, you did something wrong.”Without a second thought, I will bet my house against that theory. If one does not have a ground game to fall back on, then watch any UFC style fight and see the out come of single faceted fighters: it’s not good. Now, I have heard one defense to the overwhelming evidence provided by reality-based fights. I was speaking to a Tae-Kwon-Do instructor who immediately took offence upon discovering my past involvement with mixed martial arts. His response was to state plainly that the UFC is not realistic; he said people do not fight like that and it was a bastardization of the martial arts. He took it even further by saying there is no such thing as Gracie Ju-Jitsu, only Japanese Ju-Jitsu.

This type of denial should be classified as a mental disease. Some “traditionalists” for what ever traditional means, seem to believe that ancient combat took place on clean, groomed grass hills in perfect weather conditions where everybody was ordained in pristine white martial art specific uniforms. Apparently, in these idealistic combat situations nobody was grabbed or tackled, they did not trip or fall, and they all uniformly decided that it would be best to have no idea how to fight on the ground, or when someone grabs you or when being choked. It seems they did all of this to keep their egos fluffed and their warriors dead.

With out all the sarcasm, the misunderstanding stems from those who unknowingly practice a civilian martial art versus those who unknowingly practice military martial arts. The best way to handle this situation is to relax. Then, empty the cup of martial arts bias and realize that one would need to fight as if there were a probability the fight will go to the ground, and statistically, there is. If one should choose to ignore reality completely, or simply choose to have a bad game plan, the likely result will be 2 unskilled fighters on the ground unskillfully squeezing each other as hard as they can, unless one of them wrestled in school, and then the wrestler will probably gain control and enviably win the confrontation. A viable alternative to risky, easy-to-miss side kicks is sticking to round house kicks to the legs which are very effective and will limit, not stop, the risk and vulnerable positioning taken. Understand the weaknesses in your way of thinking; fill the holes or learn to master avoiding them.

If a person were to need further proof please refer to all Roman military and hand to hand combat standards via the history of Pancrase/Pankration. I am sure we all can agree that the Roman Empire took a considerable chunk of the globe in their time, and mind you this was done person to person and by hand.