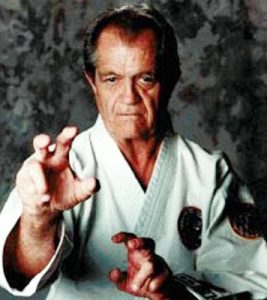 Hanshi John Pachivas was a 10th degree Black Belt and the highest ranking person in Shuri-ryu karate-do. He was born on May 3, 1926 and began teaching karate to the general public in the early 1950’s. He was considered the Father of Karate in Florida.

Under Hanshi John Pachivas traditional karate grew as his leadership supported authentic, traditional karate and he promoted  tournaments that brought Florida Karate-ka to national prominence. He was named “Coach of the Year” 6 times and traveled around the world as an Ambassador of Karate.

During Hanshi Pachivas’s competition days he was feared for his speed and power. Usually fighting from a cat stance he would use both roundhouse and front kicks with his incredible hand speed.

In 1963 Grand Master Robert Trias invited him to the Hombu Dojo in Phoenix, Arizona. This would begin a special relationship that lasted for the next 25 years. Hanshi Pachivas was one of just a few to be personally chosen by O’Sensei Trias to be a member of the Trias International Society.

Hanshi John Pachivas had many accomplishments, but the most important to him was the success of his students. Three of his students became members of the Elite Trias International Society. They were Ridgely Abele, Twice World Kata Champion, Andy Horne, and Lori Clapper. Society members are selected on the basis of accomplishment, ability, knowledge, competitive spirit and sincere dedication to the dissemination of true Karatedo. Another of Hanshi Pachivas students who deserves special mention is Donna Judge. Miss Judge is a eleven time USKA Woman’s Black Belt World Champion.

Under Grandmaster Trias, Hanshi John Pachivas received the highest title within the organization. He was a Chief Instructor and Director of the United States Karate Association International. 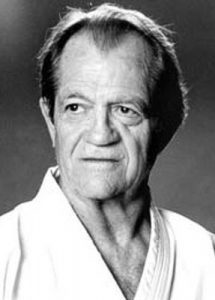 Hanshi John Pachivas also held a 6th Dan in in Jujitsu and a 5th Dan in Judo. Hanshi Pachivas provided training of authentic Karate and Sport Karate for over 40 years. He was concerned with the total development of the individual.

Hanshi John Pachivas often counseled Karate-ka on the importance of being free from any prejudice, and he considered that doing your best made a martial artist a real winner. Hanshi Pachivas believed that Karate develops character and integrity and provided all the insight necessary for a successful life. He often reminded students that hard physical training never stops. 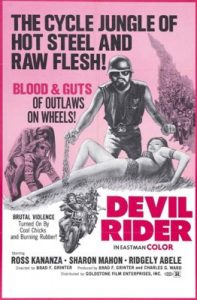 In 1970, as Johnny Pachivas,  John played himself, a karate trainer, in the film Devil Rider along with his student Ridgely Abele who starred in the film. Devil Rider was about a young rebellious girl who hooks up with a biker gang forcing her mother to hire a private detective to find her and bring her back. The detective goes undercover as a biker to search for her.

Sadly, Hanshi John Pachivas died of respiratory failure at Jackson Memorial Hospital in Miami, Florida on February 14, 2000. He was only 72 years old.