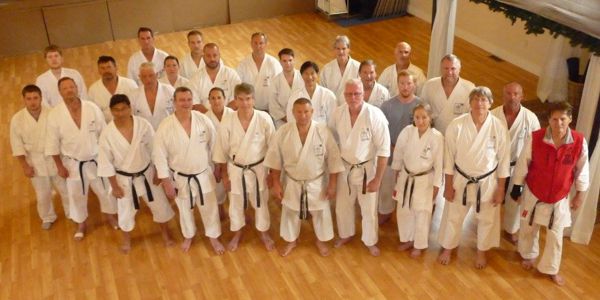 As most of you may already know, Sensei Teruo Chinen passed away last September 9, (2015). As a result, his senior students felt a tremendous responsibility for producing a great Chinen Memorial Gasshuku experience.

With that end in mind, the Gasshuku Director, Mary Roe, hosted a breakfast meeting at her home on Wednesday morning in order to review the plans for the Chinen Memorial Gasshuku, and for the continued growth of Jundokan International with the senior practitioners. The meeting was well attended, and very positive.

Registration took place at noon, at Sensei’s garden Dojo. We had attendees from the Ukraine, Canada, and several places around the United States.

Thursday’s training took place at a wonderful venue, a Grange Building in the south hill area of Spokane. It has a wonderful open hard wood floor, with no obstructions.

Sensei Bruce McDavis, who happens to be Sensei Chinen’s first ever Shodan, lead off the training with an excellent variation… boxing! He lead the practitioners through a number of simple, effective boxing combinations, practiced against a punching shield… we broke into 5 man groups, with the senior person of each group holding the shield for the others, working their combos for twenty reps each, then rotating out. The practitioners not on the shield worked the same against each other, minus the full contact. After an hour and a half, everyone’s gi was soaked!

After a brief break, Sensei Bob Davis took over the instruction, working with us on comparative Seiyunchin bunkai, as bunkai has changed over the years. Bob had done an incredible amount of research on Seiyunchin bunkai, going back into the 70’s and then noting the changes in the 80s, 90s and into the new century. The changes weren’t huge, but they were rather fascinating. What came out was Sensei’s incredible creativity growth and the growth of his understanding over the years. Bob’s session was very enjoyable and enlightening.

We then broke for lunch.

Sensei Mary Roe then lead the group through Sandan Gi practice, reviewing many variations on footwork, and of course, variations on bunkai oyo. This was both an excellent training session, and a rigorous one!

Sensei Ed Sumner then finished the day with a session on tournament style kumite. We progressed from standing basics to moving basics for free sparring to two man drills for kumite. Principles focused on included trunk rotation, footwork, timing and distancing. This was another rigorous session!

We then ended the day and went to get showers and food. There was great camaraderie enjoyed by all. 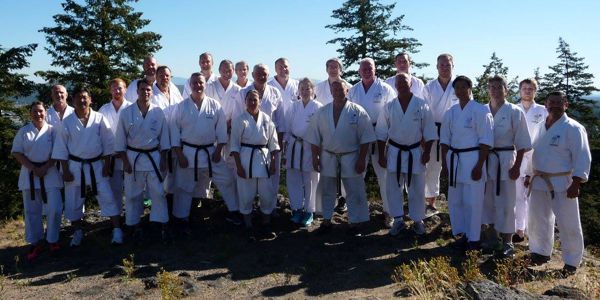 On Friday morning, we gathered at one of Sensei’s favorite places in Spokane. Called simply “the duck pond,” it is a place in one of Spokane’s many parks, with a wonderful view out over the city. We lined up and performed Tensho. Then it was off to the Grange Dojo for training.

Sensei John Lowrie lead us off with warmups.

Then Sensei Clinton Streifling worked us through the kata Sepai. Sensei Streifling’s calm, methodical dissection of the kata was a tremendous help in “polishing off the rough spots.” This was an exceptional approach to making a better kata, and was much appreciated by all.

We then broke for lunch.

After lunch, the head of our Ukrainian delegation, Sensei Valerie Kusiy, worked us on kobudo, working a challenging (both to learn, and to perform) bo kata. This was a very high energy, dynamic session! Sensei Kusiy is both physically talented and deeply enthusiastic for his subject! We primarily worked bo, but he finished with some excellent nunchuku training. It was fun, and exhausting, but the smiles behind the sweat made it clear that everyone really enjoyed it!

With just 30 minutes left in the day, Sensei McDavis took a turn to work with us on variations on Gekesai Dai Ichi. Think you know a kata? Try doing it backwards, at speed!
We then broke for the day, and once again, folks went off together to have a restful dinner.

Now to address a somewhat different subject. Last year, at Sensei’s last Gasshuku, he promoted several people to yondan, one to godan, several to rokudan, and six people to nanadan. Sensei requested that Bob Davis and Ed Sumner (two of the new nanadans) stay over one day, and spend time with him at his home. He made it clear that he understood that he had just completed his last Gasshuku. His health was failing, and badly. He then charged Bob and Ed with a responsibility. They were to form a rank and promotions committee for the Jundokan International, and ensure that those who deserved promotion received them, and that those who did not, would not be promoted. Standards were to be upheld. He also discussed some of the candidates that the committee should promote at the following Gasshuku.

To that end, the committee members met on Friday night, and made several promotions official.

Saturday morning’s session began with the recognition of the new rank for Sensei McDavis and Sensei Kusiy. After a few moments for handshakes and congratulations, we moved on to training. Sensei Kusily lead us through some wonderful training drills for iri kumi fighting. They included punching and kicking drills, choking techniques, throws, heel locks, arm bars, and more… big time sweat, and great training!

After morning training we gathered and car-pooled to visit Sensei’s gravesite. We stopped to get flowers…. and Sensei Streifling got a cup of coffee from Sensei’s favorite coffee shop. The flowers and coffee were carefully laid at his grave. A few “Sensei stories” were shared, and then we performed Tensho for Sensei.

On the way back, we stopped at the annual street fair at the Buddhist Church on Perry street. The old Perry street Dojo used to be the Church’s property, and it is next door. So we got a chance to visit the old dojo. It is now a yoga studio, and the owner was incredibly gracious, inviting us to come in and see all the changes she made. She even insisted on taking photos of us! The changes were excellent. It looked more beautiful than ever.

We then went back to the Grange dojo, and finished with Group Kata, and Kata breakout sessions.

Finally, there was a very nice catered meal for those who were able to stay. Again, great camaraderie.

*Hojo Undo is “supplemental training” and can include activities like running, doing bunny hops up stairs, or even two person body weight drills.