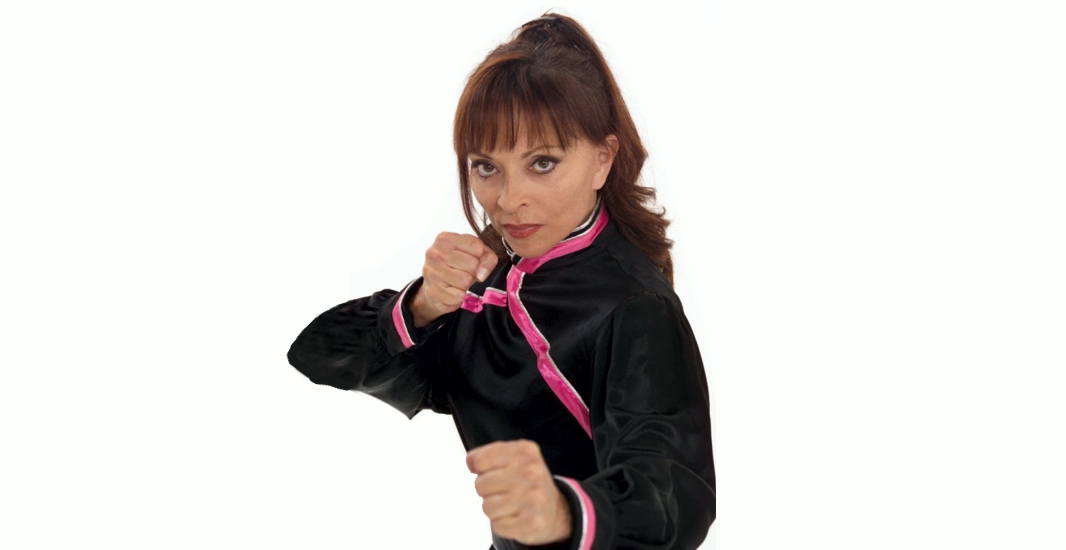 Karen Sheperd burst upon the martial arts scene like a comet and in the process she has become one of the arts brightest stars. A former gymnast, Karen was attracted to the physical beauty of martial arts movements and began studying styles ranging from Shotokan Karate to Tai Chi Chuan and many systems in-between.

By combining her gymnastic skills and her martial arts Karen entered the tournament circuit and quickly found herself in the winner’s circle. For two consecutive years Karen Sheperd was rated the #1 women’s Black Belt forms champion in the United States. She was also the first woman to win the Grand Champion title at the prestigious U.S. Open Karate Championship. Karen’s showmanship and prowess with weapons set the stage for film debut as the silver screens newest action star.

Her first film was shot in Japan where she co-stared with Eric Lee and Tadashi Yamashita in “Shinobi”; Karen was so taken with movie work that she retired from the tournament circuit and moved to Hollywood to pursue a career in acting.

Karen quickly landed the role of Red Sonja in the Conan show at Universal Studio Tours where she performed in more than 3,200 shows. Karen’s next curtain call took her to Hong Kong where she stared in a martial arts cult classic, “Righting Wrongs.” Some of Karen’s other films include: “Markus 4” with John Savage, “Soul of the Avenger” with Nancy Kwan and James Lew, “Boogie Boy” with Joan Jett, “Mission of Justice” with Brigitte Nielson and “Cyborg” with Jack Palance and Angelian Jolie.

Karen’s most notable role occurred when she played the role of “The Enforcer” in Hercules: The Legendary Journeys, which garnered the show the highest ratings ever. Karen has also guest-stared and co-starred in other television shows such as “Diagnosis Murder” and “V.I.P.” In addition to her acting career, Karen is a top-notch stuntwoman. She regularly performs and choreographs fights on shows such as: “V.I.P.”, “Buffy the Vampire Slayer”, “Angel and Walker Texas Ranger.”

Possessing an irresistible combination of beauty and martial arts skills Karen was named among the Top 10 Martial Arts Movie Stars in Black Belt Magazine along side Jackie Chan, Chuck Norris and Jean-Claude Van Damme. Karen was also voted “Most Popular Female Martial Arts Superstar” by Kung Fu Magazine. Black Belt Hall of Fame member, Karen also has been featured on the covers of every major martial arts magazine in hundreds of articles worldwide.

“My martial art were always my inspiration,” Karen says. “They helped me maintain my drive for success and gave me the discipline to follow my heart toward achieving my goals.”