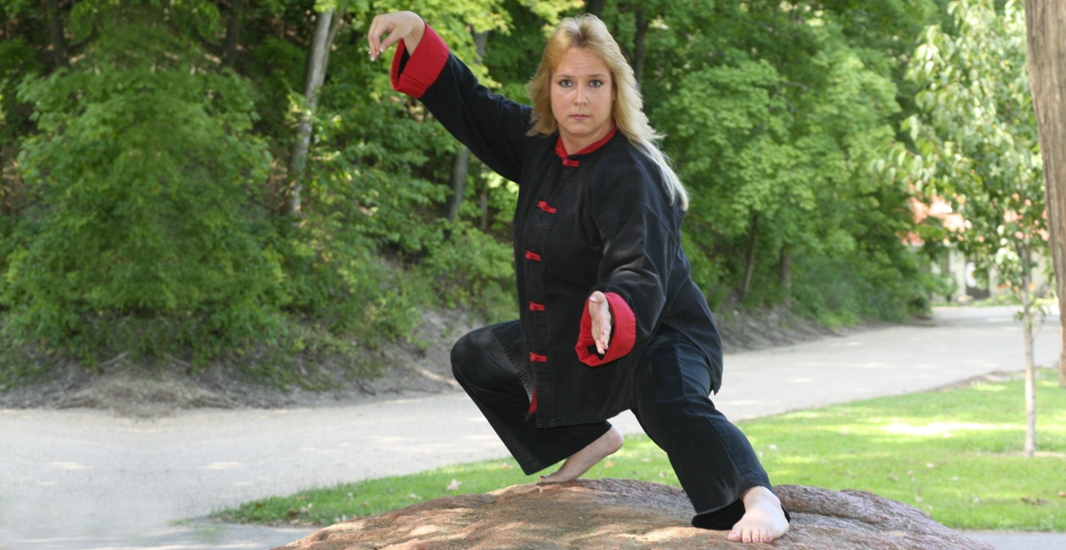 Kim Aldus began taking Tae Kwon Do in September of 1987.  She began studying under Mr. Kelly O’Keefe. Other Peoria area instructors she has studied under are Vera Harrison, Al Nimmo, Preston Jackson and Steve Aldus.

Kim Aldus is also certified to judge at USKK and Alliance tournaments.

She has competed in sparring and weapons in various state and national tournaments, for both Tae Kwon Do and Karate, of which she has placed either 1st or 2nd.

On April 12th, 2008 Kim Aldus was inducted into the USA Martial Arts Hall of Fame under the category of Female Tae Kwon Do Master of the Year.

In 2006 she placed 2nd in the nation in Kumite (sparring) and 5th in Kata (empty hand forms) at the USKK Grand International Championships.

In 2007 she placed 5th in the nation in Kumite (sparring) and 5th in Kata (empty hand forms) at the USKK Grand International Championships. Her USKK membership number is she-3640.

In 2007/2008, she placed Finalist in Kobudo (weapons) and received the award at the USKK Grand International Championships.

In June of 2009, she was presented the prestigious award of the Small Double Axe from Master Price. In order to receive the award Master Price requires his students to be at least rank of Sho-Dan. The student is judged on how they present themselves overall as a martial artist, achievements attained in class and in tournaments, and how one interacts and is viewed by other Martial Artists of all levels.

She began training with Mr. Preston Jackson in 1996 studying Tae Kwon Do, Tai Chi Chuan and other Martial Arts concepts.

On March 31st, 2007 Kim Aldus was inducted into the USA Martial Arts Hall of Fame under the category of Multi-Disciplined Female Instructor of the Year.

In February of 2008 Kim Aldus placed 1st in the nation with the Alliance for competition of Women Black Belts, 5th Degree, ages 35 to 49.

On April 12th, 2008 Kim Aldus was inducted into the USA Martial Arts Hall of Fame under the category of Female Tae Kwon Do Master of the Year.

On April 4th, 2009 Kim Aldus was inducted into the USA Martial Arts Hall of Fame under the category of Multi-Disciplined Female Master of the Year.

On August of 2009, Kim Aldus received the Alumni award from the Alliance in Cocoa Beach, Florida.

In 2008, Kim Aldus received the Warrior Award for competition with the Alliance. This is achieved by placing 1st in 3 or more events in the competition year.

On March 15th, 2008, Kim Aldus received her Ph.D. in Martial Arts Philosophy from the University of Asian Martial Arts Studies through the Alliance. Her thesis was presented on Women’s’ Self Defense – Awareness and Prevention.

In August of 2009, Kim Aldus was nominated by her peers for the award of Alliance Martial Artist of the Year for the state of Illinois.

In 2009, Master Black (VP of the Alliance) and Dr. Thomas (President of the Alliance) asked her to organize and put together the requirements for expanding the Alliance Hall of Fame to include Special Athletes. This award is intended to give recognition to competitors/martial artists who excel in courtesy, integrity, perseverance, indomitable spirit and commitment to doing their best in bettering themselves. This award is in no way intended to segregate or point out differences of an individual, but intended to honor the dedication they have put forth to the martial arts despite the obstacles in their lives (such as blindness, being deaf, loss of limbs, mental disorders, muscular disorders, etc.) They deserve to be recognized for their courage as they strive to be great Martial Artists. The first Hall of Fame inductee for the Special Athletes was Jacob Garcia in April of 2009.

Women’s Self-Defense
Kim Aldus has taught and assisted in numerous women’s self-defense seminars and demonstrations throughout the United States.