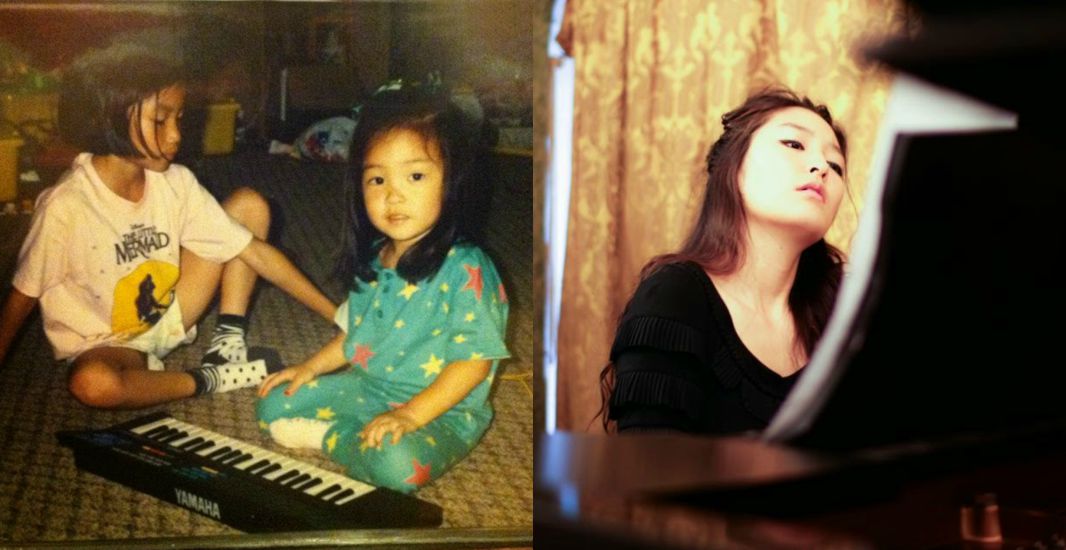 Blending classical music and the Korean martial art of Tae Kwon Do has proven to be a winning combination for 13-year-old Kimberly Kong of Pittsburgh Pennsylvania. The youthful black belt comes from a family of martial arts champions. Her father Master Young Bo Kong is a former world champion and has been dubbed the fastest kicker in the world by his peers.

Like her father, Kimberly executes her kicks flawlessly with lightening fast speed. However it isn’t her prowess in the dojang (training hall) that brings spectators to their feet in thunderous applause.It is what Kimberly does while sitting behind the keys of a piano that has earned this young lady hundreds of standing ovations and a reputation as one of the brightest rising stars in the world of classical music.

Kimberly is a budding classical concert pianist. Her impeccable execution at the keyboard has put her in the winner’s circle at some of the nations most prestigious music competitions. At the ripe old age of 10 Kimberly was the youngest winner of the Duquesne Young Artist Competition, she also won grand prize in a world competition in 1998 and is currently practicing for another world title competition. Before Kimberly turned 11 she had performed as guest solo artist with Westmoreland Symphonic Orchestra and the Pittsburgh Symphony earning her the moniker of a piano prodigy. Even famed pianist Marvin Hamlish was drawn to the youngster’s powerful performance, so much in fact that Hamlish asked Kimberly to perform with him in concert, on two separate occasions.

When I first met Kimberly I had no knowledge of her musical accomplishments so when she asked if I’d like to hear a song I expected Chopsticks or Heart and Soul. To my amazement, instead of picking and poking her way through a couple of tunes out of the beginner’s handbook book of music, she performed a 20-minute concerto.

The living room became a concert hall as her fingers flew up and down the keys. She was mesmerizing; I had never before seen such skill and intensity from a pianist. Even my idol rock’n’roll legend Little Richard paled in comparison. Her face was expressionless. Her eyes locked and focused. She was like a general in command of an army of keys, each one the black and white soldiers performing as she bid leaving in their wake a masterful execution of motion, poetry and music.

At the end of her performance she turned to me and like a puppy seeking a pat on the head asked, “Did you like it?” I sat stunned and all I could say was, “That was nice but can you do Great Balls of Fire?”

With my little joke made, Kimberly flashed a smile that could illuminate a pitch-dark room and I gave her a standing ovation. I knew that I was in the presence of a very special person, and as I would soon discover, she is as sweet and unassuming as she is talented.

“I started playing piano and studying Tae Kwon Do when I was 5,” said Kimberly. “My father thought Tae Kwon Do would be good discipline for me and I could apply that discipline to my piano practice and my school work.”

Kimberly had a burning desire to master the piano and needed no prompting from her parents to practice. In fact they must often intervene and make her take breaks or she would sit in front of the ivories all night long. This budding young superstar of the concert hall credits her martial arts training for her musical work ethic.

“I could play the piano all day if my parents would let me,” Kimberly said without taking her eyes off the black and white keys in front of her.

I can personally attest to Kimberly’s intense desire to spend all of her time practicing to improve her keyboard skills. Following her living room performance we all went to dinner and throughout the evening Kimberly used the edge of the table to practice her keystrokes. Later that night the Kong’s gave me a tour of their city, and while Master Kong was explaining the various sights, Kimberly was busy using her mothers arm as if it were a keyboard, practicing her finger positioning.

“They never stop working,” Master Kong said shaking his head. “They are like this 24 hours a day. My daughter has a very strong sense of purpose. I believe Kimberly’s Tae Kwon Do training has been very important in teaching her the value of dedication.”

“Tae Kwon Do has given me the discipline to sit still and practice for hours at a time,” Kimberly told me later that evening. “It’s also very important to be able to focus on the music, and that is also something I developed through my martial arts training.”

Kimberly’s father is a no nonsense traditional teacher of Tae Kwon Do. Trained in Korea, Young Bo moved to the United States in the 70’s where he immediately demonstrated his skills by winning Grand Champion at the 1973 Pam American Games, then in 1974 he was the North American Champion, and in 1976 Middle Weight World Champion.

While Kimberly’s father continues to work with his daughter perfecting her kicks and punches, Kimberly’s mom, Mi, is constantly by her side at the piano. Mi was herself a former Miss Korea and a very talented singer-musician. She helps guide her daughter through the endless sheets of music, which Kimberly memorizes for every concert.

“My daughter has an amazing memory,” said proud father Young Bo. “When she competes Kimberly plays from memory. She has no sheet music in front of her and the performance often lasts between 30 and 40 minutes. However it is the emotion with which she plays that sets her apart from the others. Many famous orchestra conductors and music teachers have said that Kimberly is able to bring the notes to life. One big reason for that is because her fingers are so strong from Tae Kwon Do training. So when she strikes the keys that strength puts extra power and emotion into the notes.”

Protecting those valuable digits from injury is a priority, especially with a big contest coming up. It would be a tragedy if anything were to happen that would hamper her ability to practice or play the piano. For that reason, the 1st degree black belt has temporarily stopped competing in martial arts events.

“I don’t want anything to happen to my hands,” said Kimberly. “So although I still train in Tae Kwon Do, I don’t want to spar like I used to.”

In addition to being a musical prodigy, Kimberly is also a straight A student (name school). Using the same mental discipline that she applies to her music and the martial arts Kimberly has translated that focus into a 4.0 grade average.

However, being an honor student and a celebrity can have an adverse effect on a teenager’s life. Unfortunately some of Kimberly’s classmates don’t understand or even appreciate the road she has chosen to follow. For many of them a tough day at the office is figuring out what mall to hang out at, and forget about studying, you can always do that tomorrow.

“Some people think I’m abnormal because I like to study and I really enjoy school,” Kimberly confessed. “Sometimes they made fun of me and it does hurt my feelings.”

Those of us with a few more miles under our belts realize that individuals who can’t achieve often criticize those who do. Kimberly is a very special young lady who has her sights set on a goal, and nothing is going to come between her and realizing her dream to become a concert pianist. Someday those same people who once stood on the sidelines making snide remarks will be the same people who will be bragging about being her classmate when she is a big star.

Kimberly has made a decision to sacrifice a big part of her life in order to become a concert pianist. She practices at night instead of going to parties, she travels to compete in contests all over the nation forgoing many school events, and she shakes off the misguided quips of jealous schoolmates and attacks her self appointed task with that much more determination.

Kimberly Kong is much more than a black belt in the martial arts, she is a black belt in life and has at a very young age reached a depth of understanding far beyond her years.

As for her Tae Kwon Do, Kimberly assured me that the martial arts would always be an important part of her lifestyle. Following a very important International piano competition this fall in Dallas Kimberly plans to enter a few more Tae Kwon Do tournaments.