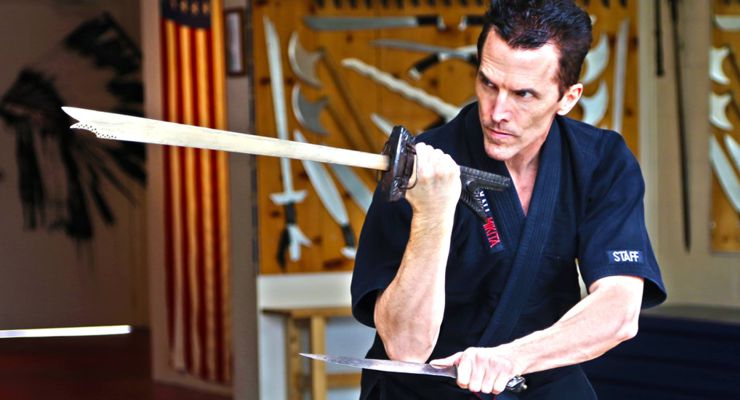 Mark Mikita opened his first martial arts school in 1978 and he has been teaching full time since. He is a lifelong practitioner of martial arts and he has earned an international reputation as a consummate martial artist and a patient and inspiring teacher.

Mark went to school to study technical and scientific illustration and product design, and part of his training involved going to a medical school and cataloging dissections with a drawing pad as medical students dissected cadavers.

Mark Mikita was training to become a professional illustrator, however his passion for training in and teaching martial arts would eclipse his plans to become a professional illustrator. The emphasis on detail and precision that defined the style of drawing he learned and the intimate, hands-on knowledge of human anatomy he gleaned from those experiences has a significant impact on the way he looks at and teaches technique in martial arts.

Mark Mikita grew up on military bases and has a deep and abiding respect for anyone who has served their country in uniform, but he has a deeper admiration for those individuals who actually experienced the horrors of combat.

At the urging of his father, a World War II combat veteran who fought in the Philippines and personally witnessed many of the atrocities committed by the Japanese against the Filipino people, Mark started a closed-door group exclusively for combat vets suffering with post-traumatic stress disorder. His goal was to help these warriors find some measure of peace in their lives and this teaching has been profoundly rewarding.

He credits the years he spent working with those deeply wounded men with giving him an understanding of the power of compassion and the true meaning of brotherhood among warriors. In honor of their sacrifices and the fallen heroes for whom they still mourn, Mark never charged any of them for training, as he felt that they were as much the teachers as he was and they more than paid their dues in Vietnam, Desert Storm, Iraq and Afghanistan.

Mark Mikita is also quick to acknowledge that his work with battle-scarred vets helped him fine-tuned his sensitivity in working with victims of sexual assault and violent crime.

In 1993, Mark was honored to receive Grandmaster credentials in the Filipino martial arts but he but he prefers that his students address him simply as Guro, the Filipino word for teacher, a title his beloved father imbued with great significance when Mark was just starting out teaching. Mark did not merely want to be an instructor, he wanted to aspire to be a teacher.

Your typical instructor just barks commands and, if the student doesn’t get with the program, he just barks the same commands, louder.

A teacher, on the other hand – possessed of patience and radiating constant encouragement and support – endeavors to step behind the student and look through their eyes at the material being taught and, if he has the gift, sees the best way to reach that student and learns the material anew each time he does.

A perennial student, Mark thinks of himself as the senior-most student in his school and his most advanced students will attest to the fact that he continues to expand the horizons of his personal art, both by studying with other teachers and, more importantly, by tapping in to his own creativity, something he strongly encourages his students to do as well.

Mark lost his eldest brother to suicide in 2006, and this tragic event altered his course as a teacher, causing him to put more emphasis on helping his students find more balance and purpose in their lives, instead of driving to simply accumulate money and material positions, which provide neither purpose or balance.

To contact Mark Mikita and his Mikita School Of Martial Arts in Venice, CA, visit their listing on the Martial Arts Schools & Businesses Directory at FindADojo.com by clicking on the image on the left.