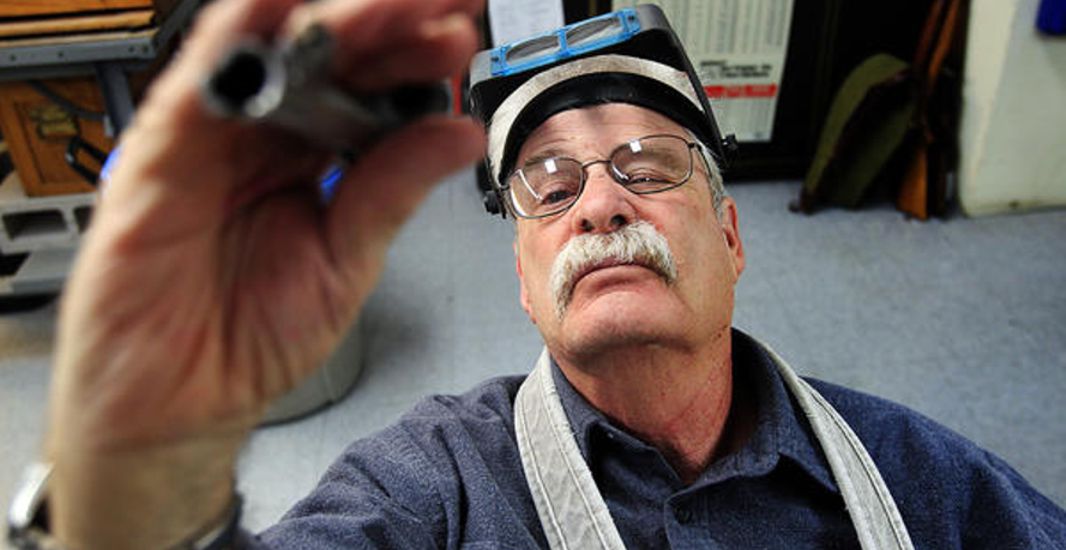 For this talented pistolsmith, second-rate work is not an option.

Actor Steven Seagal knows how to fight. His personal background in martial arts is obvious when you watch his action movies. When it came time to choose a custom pistolsmith to craft the guns for his movies, Segal choose Terry Tussey. Seagal knows guns, too.

I recently talked with Tussey about his guns and asked him how he got involved in the business. “My wife and I were walking on a city street in 1957 and saw a newspaper rack displaying a newspaper called The Daily Worker. It was a Communist rag and it really got my wife worked up. She hauled off and place-kicked it into the street before I could do anything to stop her. I pulled her into the first store I could find to get us off the street and it happened to be a book store. I found a copy of Fighting Handguns by Jeff Cooper and bought it. I was 17 and I bought a .45 almost immediately. I believe I started working on .45s about an hour later!”

In late ’59, Tussey worked at Martin B. Redding’s degreasing rifles and doing armory work. After a short while, he started to work the retail end and built a reputation as a knowl edgeable young fellow.

Years passed and positions at Safariland and Colt during the ’60s and ’70s built his experience in the industry. Tussey kept gunsmithing Colts during this time, and had a particular admiration for Armand Swenson. He said, “Armand combined classic good looks with function. Unlike the military who only care about how it works; Armand always made form and function blend. That had a real impact on me.”

Tussey always thought that one day he’d be a full-time custom smith and in 1980 decided to give it a go. He quit his “real job” and hung out the shingle. He said, “I haven’t looked back since!”

Part of the reason for Tussey’s success is the personal attention he gives to his customers. “There are no dumb questions, just basic ones,” he said. “I enjoy taking the time to explain how the gun works to a customer. You can often see their eyes light up as they understand what’s really going on for the first time. This helps to let them make sensible decisions about just what they might want, or need done to their personal gun.”

Tussey’s shop does full spectrum work, but “tactical” guns are their specialty. “I like a good looking gun that shoots straight and is stone reliable.” Tussey’s custom .45s, Colt .380s, HiPowers and revolvers are a pleasure to behold and deliver accuracy with predictable regularity.

Tussey makes a strong case for the 1911 design. “The straight grip and easy trigger reach is a real plus. I think one of the biggest downsides of the DAO is the trigger pull and the `reach around’ often required to properly address the trigger. A 31/2 pound trigger on a 1911 makes it easy to learn, but I’ll admit it also makes it tough to go to sleep with a .45 in your hand! I think the DAO design is best for cops, soldiers or citizens who don’t have the time or inclination to train much.”

With the surge of interest in single column semiautos since the Brady law and the accompanying increase in the number of “custom” pistolsmiths around, I asked Tussey what a customer should look for in a smith.

“Most shops have a basic reliability package they like to sell. It’s often a ramp and throat and some chamber work. Many shooters think you can stop there, but I think a gunsmith who does is remiss in their job.

“Part of my customer education is a careful explanation of what `needs’ to be done and what is `nice’ to have done. I carry that basic package further: bolt face work, extractor tuning, an oversized firing pin stop, which all Springfields and Series 70 Colts need, trigger, hammer and sear work, check the hammer strut, and weld and refit the magazine catch on Springfield pistols is a basic list.

“Something that many smiths overlook is re-timing the Series 80 Colt firing pin safety system. After a trigger job, the shortened pull changes the dynamics of the lever system in the Series 80 and if it’s not addressed can lead to failures.”

Some custom shops simply offer custom “packages” to choose from. Tussey’s personal “just what each customer wants” approach is a sound one. Indeed, many customers wonder if the ramp and throat job on the $3,000 full-house “race gun” is any better than the one they are getting on their basic gun.

Tussey assures customers that the $59 trigger job on their “sky’s the limit gun” is exactly the same as the one on another customer’s entry level home Tussey said he enjoys making accurate Colts and won’t stop with a customer’s gun until both he, and the customer are happy. “If you don’t J like it, we’ll fix it. Period.”