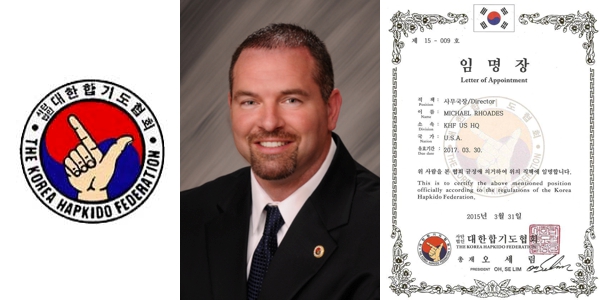 March 30, 2015 – ST. LOUIS — March 2015, Grandmaster Michael Rhoades, Wentzville, Missouri, was appointed as Director, U.S. Branch by President, Oh Se Lim of The Korea Hapkido Federation, Seoul, South Korea. The duties and responsibilities of Grandmaster Rhoades’ appointment are to promote and regulate traditional Korean Hapkido. The KHF is one of, if not the, oldest and largest international Hapkido organizations recognized by the Korean government. The KHF is the governing body of over 40 styles of hapkido.

Throughout the USA, one of Grandmaster Rhoades’ first responsibilities as director is to appoint six (6) regional directors to serve as points-of-contact for other Hapkidoans in their regions. The applications are being received and the opportunity remains open for professional, dedicated individuals who are ready to commit to the growth and success of The KHF and serve with honor.

Overseeing the testings for promotions within The Korea Hapkido Federation is a task that Grandmaster Rhoades is looking forward to. The KHF U.S. Branch will establish a registry to include all Hapkido certifications for verification purposes.

There are only 6 regional Directors positions available and persons of interest should forward their bio and/or questions to koreahapkidofederation.us@gmail.com or mail to the Headquarters at: KHF-USA 600 W. Pearce Blvd. Wentzville, MO 63385. Please feel free to contact the United States Headquarters at (636) 327-5425 or visit the The Korea Hapkido Federation.