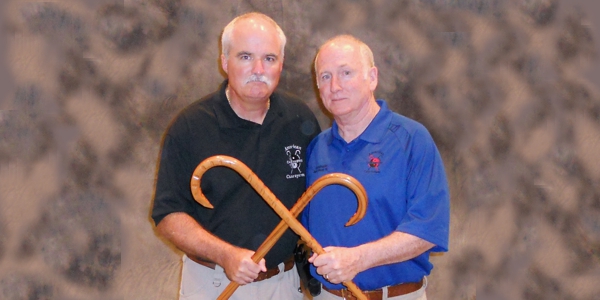 As I was traveling via rail on a frequent basis, I became interested in the Cane as a tool not only for walking but for personal safety. This began my journey with Cane Fu. I started investigating the Cane using the internet and found the Cane Master’s website. I called one late afternoon as I was interested in ordering a cane, and Grand Master Mark Shuey answered the telephone. I ordered my first cane. I had no idea I would begin a journey that I continue on today. Along with many lessons, and a lot of patience, I expanded my knowledge and technique, and I ordered virtually every video that Cane Master’s offered.

I decided that I wanted to become a cane instructor and I finally got to meet Grand Master Shuey. I worked hard with some highly recognized Canemasters, and I became a basic instructor. I met some fantastic people along the way; one being Canemaster Guy “Ziggy” De Ro from Belgium. I was hooked and began my training in the American Cane System; Yellow Belt, Red Belt, Brown Belt, Black Belt and beyond. The system has evolved for the better thanks to Grand Master Shuey, Grand Master Crandall, and other Canemasters. I have been lucky to keep an open mind, a beginner’s mind, through out my journey. I have been blessed to be invited to teach at many dojos and have taught countless classes for Cane Masters. It has all been my honor and I am humbled.

As I went about my business, I noted that the older students were honored, and, thanks to Grand Master Shuey, Cane Fu was developed. But Cane Fu itself lacked a real ranking system. As I started study in an empty hand mixed Kung Fu system, my Sigong – Tiapan, Joe Churzinski, pointed this out to me. He recognized the value and efficiency of the Cane and he embraced the cane as did virtually all of my fellow students. Eventually he promoted me to Sifu in his system with special emphasis on the Cane. Tiapan Churzinski also predicted that unless a ranking system came to be for Cane Fu, I would loose some of my senior/older students. I was torn about what to do and how to present the idea of a ranking system for Cane Fu to Grand Master Shuey.

It finally came to pass. My Kung Fu Sigong -Tiapan had been right years prior and the older students in my class had become disgruntled. I didn’t fathom the importance of real ranking recognition for the older students that didn’t want to embrace the entire American Cane System, but did want to continue study in Cane Fu and expand their knowledge and proficiency. I left the class with much sadness. It was too little, too late. I take full responsibility for not acting sooner. To add injury to illness, I tore my left bicep while sparring with one of my Masters, Sigong Jerrod Byers. He felt terrible and frequently visited me during my recovery. But I knew what I signed up for. I underwent surgery to repair my torn bicep. It was the Chinese Zodiac “Year Of The Horse” and it was tough. It made me all the more dependent on the Cane.

I pitched an idea to Grand Master Shuey of a ranking system for older/senior students, and thus the Cane Master’s Silver Dragons was born. The curriculum was already in place in Cane Fu, known as the “Dirty Dozen”, and available in the Cane Fu manual and DVDs. I didn’t have to ‘re-invent the wheel as Grand Master Shuey had already done developed the program. All I did was give it a name and design the ranking system. To earn a Silver Sash in Cane Fu, I presented Grand Master Shuey with the idea of a Cane Fu student studying the entire Cane Fu curriculum to it’s fullest extent, and eventually demonstrating the “Dirty Dozen”, along with some random techniques chosen by the testing Canemaster as a final test. This would earn the Cane Fu student a “first degree Silver Sash”. They would also be inducted as a full member of the Cane Master’s Silver Dragons. I suggested a Silver Sash instead of a silver belt because it would be totally exclusive to Cane Fu, as the American Cane System uses the belt system, and traditionally a colored Sash is awarded for proficiency in Kung Fu (Cane Fu/Kung Fu). It is my solemn hope that this will help us involve more senior/older students, and that they will recognize the value of regular practice and “keeping on the path”.

Outside of the dojo, we do not seek contention. But the “real world” can be extremely dangerous. If we can avoid danger, we should. However, making sure we carry a totally legal tool, such as a Cane, along with the knowledge to use it is vital if we are confronted with untoward force. Students who want to stay exclusively within the boundaries of Cane Fu will benefit from this new program. May your study, practice, and journey with the cane and Cane Masters be as wonderful and fulfilling as my own is.