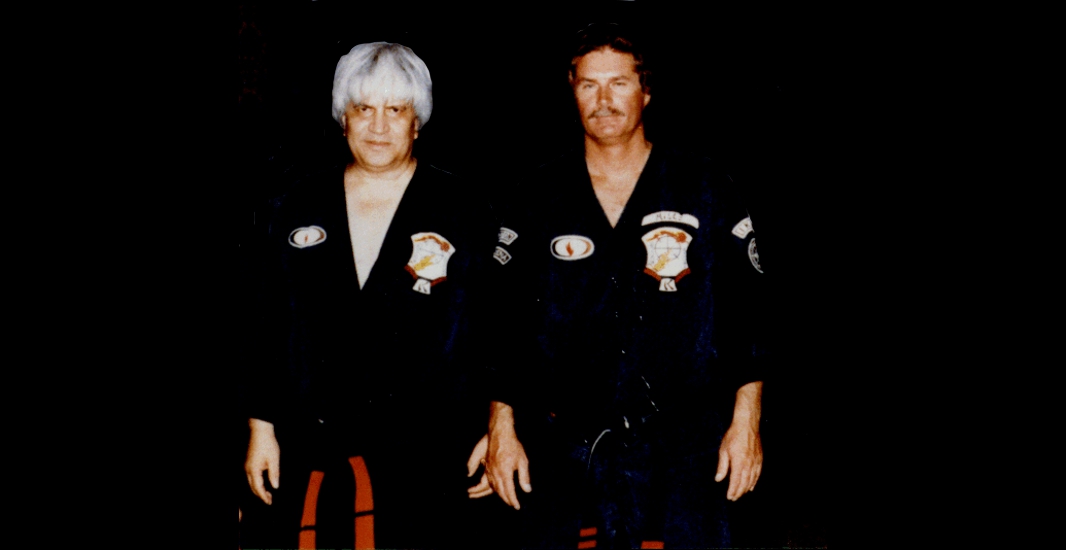 Paul Mills is the President and founder of the American Kenpo Karate International (AKKI) association and holds the rank of 10th degree black belt. He serves as the Chief Examiner at all international tests and is the Chairman of the AKKI’s Board of Directors. He has been consistently training in the art of American Kenpo since 1966.

Mr. Mills has been featured as one of Ed Parker’s most proficient and top students in a recent book by Joe Hyam’s called The Journey. His full biography along with photos when he started in Kenpo all the way to the present day.

Mr. Parker would often take Paul Mills to other schools to introduce him to different students of his. It was during these trips that Paul Mills earned the name and reputation as the “Smiling Guillotine”. Mr. Parker was proud of all of his student’s accomplishments and abilities. Mr. Ed Parker was friends with many of his students that were in his association, as well as many who were in other systems and styles. However, Paul Mills was not only a good friend with Mr. Parker, he was one of only a handful of his protégés having trained directly at Mr. Parker’s home consistently for the last ten years of Mr. Parker’s life.

Sadly, in December of 1990 Paul Mills instructor passed away. Many in the Kenpo community were left without a leader, instructor, and friend. As Paul Mills continued with the I.K.K.A., he had the opportunity to remain close to the Parker family by teaching Mr. Parker’s son-in-law, Larry Kongaika until 2nd degree black belt. He also taught many of the high-ranking black belts in the association at that time.

Paul Mills was the only person to serve as a member of 1) the I.K.K.A. Systems Council (One of only three members) 2) as the National Testing Director and 3) Regional Representative for a ten state area (region #10), known as the “Paul Mills Family Group”, at the same time. He was also one of a handful of Mr. Parker’s black belts to teach at the 1991 I.K.K.A. Ed Parker Memorial camp at the Pasadena studio.

Although Paul Mills is internationally known for his speed, having been a world record holding quick draw artists, he has many other attributes than just this one. Speed was just one of many things that he covered with Mr. Parker in the time they spent together.

Paul Mills has more than twenty years experience working security in his nightclub in the cowboy town of Evanston, Wyoming. He worked some of the roughest years in Wyoming’s history during the “Boom Years”. He had to deal with some of the wildest cowboys who would often square off against each other in his nightclub. He learned many valuable lessons first hand with people who didn’t want to leave his establishment or those who just knocked out someone on the dance floor. He has hands on experience that has helped guide him as to what is realistic and practical when developing the curriculum for the AKKI association’s students and instructors.

Paul Mills has also started to redefine the empty hand side of the system as well. He has developed new curriculum based on his personal experiences in his nightclub, as well as some of what he was taught by Mr. Parker. He was taught how to move differently than how things were written in the belt manuals. In addition, this first hand knowledge helped him formulate the greater majority of the updates to the American Kenpo system.

He has followed his instructor’s example by developing and putting back into the system more than what was just taught to him. Mr. Mills studied the American Kenpo system from inside out, developing a complete and effective club and knife system based on universally true and correct concepts and principles. In this process of developing and expanding these American Kenpo systems, he had to term new concepts and principles that he identified that were not part of the vocabulary of traditional American Kenpoists. What has been developed in the AKKI incorporates some of the additions that Mr. Parker was making prior to his death. Mr. Mills has carried on the innovation process to develop the greater majority of what is taught in the association today.

Paul Mills has also studied out knife designs, uses, and materials for over the last fifteen years in an effort to better understand the weapon and how to make it better fit his needs. He has discussed with several of the worlds top knife makers and designers his ideas and got their feedback. This was done to ensure his designs were up to date and some of the most progressive knives out on the market. Some of these designers have even incorporated his ideas into their knives. His knives follow his philosophy of Structure Governs Function and his weapons systems are predicated on The 3-S Concept — Speed, Surprise, Simplicity.

In 1997 after much consideration Paul Mills struggled with the decision to leave the I.K.K.A. Paul Mills wanted to innovate and develop the art further as well as pursue other interests. He intended to just keep teaching American Kenpo to handful of his students. After the tremendous response from his students and others seeking him out as their instructor, a large group of people requested that Mr. Mills form his own association. In September of 1997, the American Kenpo Karate International association was officially formed. Today he is the President of the AKKI and is a 10th degree black belt. There are now over 200 schools and clubs affiliated with his association.

Paul Mills misses his instructor and speaks highly, and often, about him in his classes, seminars, e-mails and phone conversations. Anyone who has been around him in the last twenty years knows the respect, admiration and loyalty he has for his instructor. So much so that he has tried to carry on his instructors work. Paul Mills has made many great contributions to the art with the many principles, techniques, forms, sets, drills, freestyle as well as manuals and journals that he has developed for the members of the AKKI.

USAdojo - August 6, 2009
We use cookies to ensure that we give you the best experience on our website. If you continue to use this site we will assume that you are happy with it.OkRead more