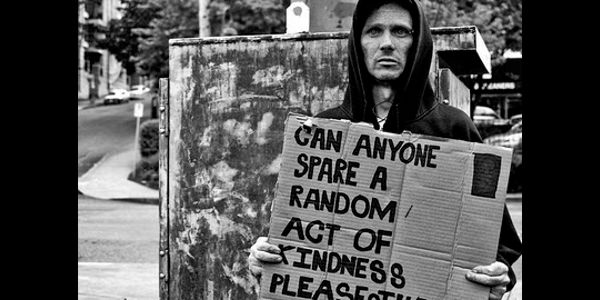 Do acts of kindness each day, and you will sense greater satisfaction than any kind of random-living could bring you. Be proactive and LIVE. Don’t just react to life. Truly LIVE.

Yesterday was a great day! It was one of those days where all things seemed right in the world. Even in the very midst of challenging times, there was still that peace that the Apostle Paul so aptly described as beyond all understanding. It started with an ordinary trip to work. A few minutes in, I had this sense that something was about to happen in a good way. It was almost as if God was in the car with me and I’m not one of those people who makes that claim very often. It really felt that way. There was a sense of expectation. I took a second and just asked for God’s guidance and that he would live through my actions for the whole day.

The next thing I knew, I saw a homeless man pan-handling on the corner of 55N and Weber Road in Bolingbrook (Chicago suburbs). It is common to see the homeless in this place, but I’d never seen this man before. I tried to slow down to see the man, but the light was green and there was a lot of traffic behind me, so I had to pass him and I kept driving. I suddenly had the sense that I was supposed to go back to him and to give him the $3 in my pocket. So, I turned around and passed him again, and drove down a hill to a gas station across the interstate, and parked my car. I walked up a muddy hill and walked over to the man through some parked cars waiting to exit the interstate.

I told him that I felt absolutely compelled to give him the money, and he thanked me. We ended up talking about a bunch of things for 5-10 minutes. Before I left, he said: you know, it’s my birthday, today. I’m 56. Born February 17th, 1955. I responded: I’m so sorry you have to be out here on your birthday! That’s all I had. Nothing to make his life better and no more money to give. No words of wisdom. Period.

I left him, and when I got to my car, I had a pressing thought: Take him a birthday cake. Make him feel loved and valued and worthwhile like humans are supposed to feel.

I put a quick message on Facebook about my experience, and challenged people to stop at that intersection to celebrate Terry’s 56th birthday. A few friends actually did it! Marco Micola and I took him a birthday cake, but sadly, he was gone. I was nearly disappointed, but then I realized that God had put me at the right place at the right time. He accomplished through me and my friends what he wanted to, and that was enough.

Later in the evening while sitting at home with my family, I went onto the news site HuffingtonPost. It said, please tweet us your favorite random acts of kindness, because today is Random Acts of Kindness Day.

But here is what I know there is a way to live in that “sweet spot” each day by being “open and present,” and asking God to guide your steps and to give you the eyes to see what he wants you to see. If you do that, I promise you that you will live in a way that is anything but random.

Do acts of kindness each day, and you will sense greater satisfaction than any kind of random-living could bring you. Be proactive and LIVE. Don’t just react to life. Truly LIVE.