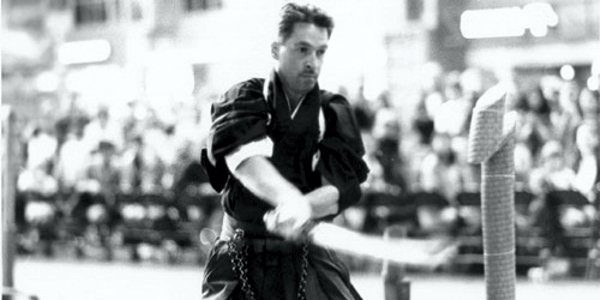 Russell McCartney began in the martial arts thirty-five years ago in karate and has grown to be the Chief Instructor of his own System of affiliate schools of swordsmanship throughout the U.S. Over this time he has studied under masters of the martial arts profession in karate, Wing Chun and Tai Chi Kung Fu styles, Aikido, finally settling into swordsmanship as his passion of the past 25 years. This gradual immersion into the sword arts set him on a path that would eventually lead him to world champion status in this art form.

The process he has developed is a teaching and training practice with technique that is a complete and effective methodology suitable for children and adults. As a uniquely American expression of Asian sword style its psychology is based in human virtue and self-improvement.

Using these unique techniques of Ishi Yama Ryu, he shattered the previous record World Record by 5 cuts and a full 25 minutes all without a single missed attempt. By the finish, the record had been pushed to a total of 1181 cuts, 181 cuts beyond the old record, still eleven minutes thirty-six seconds under the previous time, all without a single missed attempt from a kata based approach.

This new Guinness world record of eleven hundred eighty-one consecutive cuts without a single missed swing is a phenomenal testament to the validity of the technique and a profound statement to the resolve of the human spirit.

Highlights over twenty five years of service to the martial arts and personal development:

Member of Seattle King County Lecture and Seminar series presenting ‘Kids at Risk’ programs for all grades of public and private schools.

Presented as ‘Target test cutting’ (cutting in the flow of movement to multiple directions to multiple targets) this effort set a new benchmark for this form of swordsmanship. As a benefit fundraiser for Muscular dystrophy, it was viewed by nearly 500 spectators at the Seattle Cherry Blossom festival held in the ‘Centerhouse’ building at Seattle Center. (see link for World Record)
*future challenge acceptance candidates see Senbongiri Challenge rules