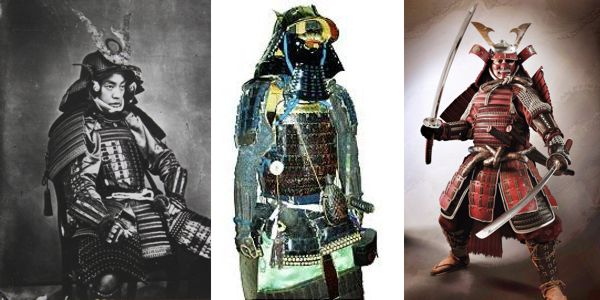 The samurai (or bushi) were the members of the military class, the Japanese warriors.  Samurai employed a range of weapons such as bows and arrows, spears and guns; but their most famous weapon and their symbol was the sword.

Samurai were supposed to lead their lives according to the ethic code of bushido (“the way of the warrior”). Strongly Confucian in nature, Bushido stressed concepts such as loyalty to one’s master, self discipline and respectful, ethical behavior.

After a defeat, some samurai chose to commit ritual suicide (seppuku) by cutting their abdomen rather than being captured or dying a dishonorable death.

Below follows a short history of the Japanese warrior:

The samurai’s importance and influence grew during the Heian Period, when powerful landowners hired private warriors for the protection of their properties. Towards the end of the Heian Period, two military clans, the Minamoto and Taira, had grown so powerful that they seized control over the country and fought wars for supremacy against each other.

In 1185, the Minamoto defeated the Taira, and Minamoto Yoritomo established a new military government in Kamakura in 1192. As shogun, the highest military officer, he became the ruler of Japan.

During the chaotic Era of Warring States (sengoku jidai, 1467-1573), Japan consisted of dozens of independent states which were constantly fighting each other. Consequently, the demand for samurai was very high. Between the wars, many samurai were working on farms. Many of the famous samurai movies by Kurosawa take place during this era.

When Toyotomi Hideyoshi reunited Japan, he started to introduce a rigid social caste system which was later completed by Tokugawa Ieyasu and his successors. Hideyoshi forced all samurai to decide between a life on the farm and a warrior life in castle towns. Furthermore, he forbade anyone but the samurai to arm themselves with a sword.

According to the Edo Period’s official hierarchy of social castes, the samurai stood at the top, followed by the farmers, artisans and merchants. Furthermore, there were hierarchies within each caste. All samurai were forced to live in castle towns and received income from their lords in form of rice. Masterless samurai were called ronin and caused minor troubles during the early Edo Period.

With the fall of Osaka Castle in 1615, the Tokugawa’s last potential rival was eliminated, and relative peace prevailed in Japan for about 250 years. As a result, the importance of martial skills declined, and most samurai became bureaucrats, teachers or artists.

In 1868, Japan’s feudal era came to an end, and the samurai class was abolished.

USAdojo - March 26, 2019
We use cookies to ensure that we give you the best experience on our website. If you continue to use this site we will assume that you are happy with it.OkRead more