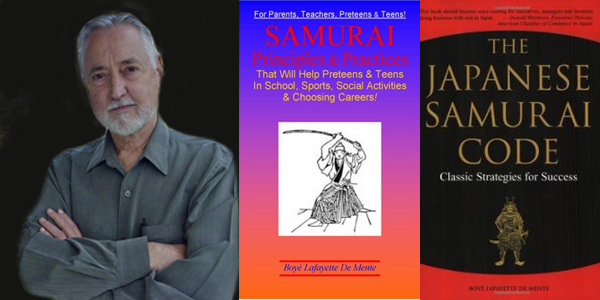 Japanologist and author Boye Lafayette De Mente says that samurai-type training should be introduced into the American educational system, and has published a “samurai training manual” to help achieve that goal.

Internationally known for his books on Japanese culture and a recognized authority on the way of the samurai, the Paradise Valley, Arizona-based author has identified the principles and practices that made up the educational and training process of samurai youths and published them in a book entitled: Samurai Principles & Practices That Will Help Preteens & Teens in School, Sports, Social Activities & Choosing Careers.

The book covers all of the basics of the samurai training ­ setting goals, discipline, diligence, perseverance, respect for others and one’s self, personal appearance, keeping things in order, living frugally, using intuitive and emotional intelligence, and tapping into cosmic power.

Japan’s famous samurai warriors ruled the country from 1192 until 1868. De Mente says that during the latter centuries of their reign their training went beyond martial arts to include such cultural pursuits as poetry, painting, calligraphy, history, philosophy and social behavior, making them one of the most remarkable groups of people the world has ever seen.

Schooling in the skills and knowledge necessary to produce a samurai began in early childhood, and was a lifelong effort.

De Mente says that training in karate, kendo (“the way of the sword”) and meditation are paths to learning the skills, morality and motivation that made the samurai so successful, and recommends that this training be incorporated into the educational system of Western countries.

“The present-day systems of parenting and educating in the U.S. and elsewhere obviously fail to provide the physical, intellectual and emotional framework that youths need to even approach their full potential­and that now includes Japan,” he says.

“The introduction of American culture into Japan following the end of World War II in 1945 resulted in the virtual demise of samurai-type training of the young within a single generation,” he said.

“The negative effects of this cultural shift were painfully conspicuous by the 1980s, prompting a growing number of Japanese to individually take up training in karate and kendo and the practice of meditation to reintroduce a sense of order and spiritual power into their lives.

“It was the spirit of the samurai,” De Mente continues, “that made it possible for tiny resource-poor Japan to become the world’s second largest economy in less than 30 years. Without that spirit, Japan will soon be just another kid on the block,” he added.

De Mente makes the obvious point that parents and teachers must take the lead in creating the environment necessary to build positive samurai-like qualities into the mindset and behavior of students.

The book should especially appeal to the millions of students who are into Japanese-made manga (comics), video games, super secret agent ninjas, and samurai films.

Dancing with Saenchai By Kevin Ross

Mystery of the Mountain – Character Development

Antonio Graceffo - October 7, 2013
We use cookies to ensure that we give you the best experience on our website. If you continue to use this site we will assume that you are happy with it.OkRead more