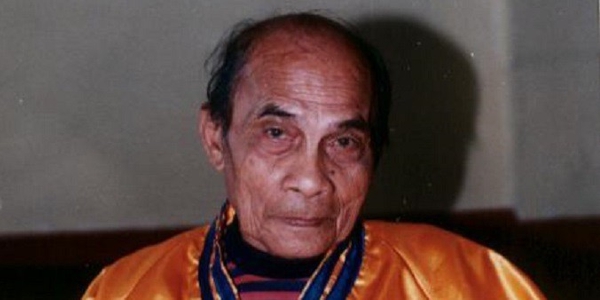 Ama Maestro Saturnino Quinto Fabia born on November 29, 1915, is one of the legendary Masters who lived to be 90 years old.

After the death of his father, Maestro Mauricio Fabia, Ama Maestro Saturnino Quinto Fabia became the successor of the family system of Estrella de Estoque. Only family members interested in the art practiced the Estrella system quietly and secretly.

The Cinco Tiros style is Maestro Fabia masterpiece. His father taught him the Cinco tiros system after mastering the Ocho Tiro Orihinal.

Maestro Saturnino Fabia is also known by his father’s legendary nickname “Langka.” He describes his art as a survival self defense, used only to protect yourself, your family, and those who cannot protect themselves.

In the sixties and seventies, the Estrella system remained unknown. People were drawn to Karate, Kungfu, and other systems due to Western influences. In 1986 Maestro Bernardo Fabia Salinas began researching his family’s forgotten art, and introduced the art to those willing to learn the system in North America and in the United States.

Ama Maestro Saturnino Quinto Fabia was recognized as one of the most respected master’s and was the leader of the Sinkatan-Arnis Estrella system. Maestro Fabia was a very traditional and humble man, a dedicated practitioner, teacher, and a true master of Filipino Martial Arts.

Saturnino Quinto Fabia was inducted into the Hawaii Martial Art International Society Hall of Fame Hawaii USA on May 25, 2002. He passed away in 2005.