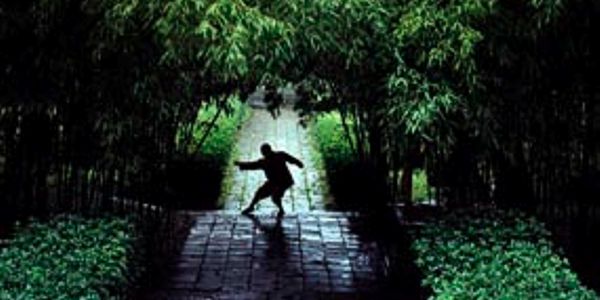 Shi Dechao exemplifies the big warrior monk. At 5′ 11″ and weighing in at over 220 pounds, Dechao may not be as gargantuan as many MMA fighters, but in person he’s big, thick and solid, towering above the average Chinese citizen. With such an imposing physique, he doesn’t really need martial arts to defend himself. Add in his bushy beard and gentle demeanor and Dechao looks like he just walked out of the pages of Shaolin legend. He is the quintessential Shaolin monk.

Shi Dechao (釋德朝) is the master and subject of National Geographic photographer Justin Guariglia. In 2008, Guariglia’s portrait book, Shaolin: Temple of Zen, broke new ground in exposing real Shaolin to the West. Guariglia invited Dechao to two gallery openings of his work, the first at Otis College of Art and Design in Los Angeles, CA and the second at the National Geographic Museum in Washington, DC. At both events, Shi Dechao gave a remarkable demonstration of one of Shaolin’s venerated consummate arts, Shaolin Iron Palm. But instead of the stereotypic smashing of bricks, Dechao used his iron palm for something quite different. He used it to paint calligraphy.

Interactive Shaolin Iron Palm and Calligraphy
For Shi Dechao’s iron palm demonstration, he asks the audience to strike his hand as hard as they can. He does this to get them to spur him on, to give him energy. At the same time, he asks them to make a wish. “How much do you want your wish to succeed?” asks Dechao in Mandarin. “You give me all that power. If you really want it, you give it all the power you can. That’s from your heart ? give blessings to all the wishes. This mindset is different. The power is not destructive. It has a lot of love and blessings. If the audience doesn’t have enough, I strike the ground to pull up even more energy. Then it will all come out in my calligraphy. I can feel where the energy comes from. I can sense if you give 100%. The power doesn’t only come from the small dantian (丹田 literally ?cinnabar field’, the center of qi in the pubic region). You put your whole body, spirit, mind and heart into it. That’s much bigger. When I absorb that power and paint calligraphy, I can heal some of the people that strike me. Everyone has their baggage. By striking me as hard as they can, they relieve some of their pressure and stress.”

Much of the subtlety of Chinese calligraphy is lost on those who don’t read Chinese. Chinese characters are pictograms. Words aren’t formed by an assemblage of random letters. Words are derived from elemental drawings of what they actually mean. Look at the word for tree – 木 (mu) ? and you can see the tree. These drawings are simplified into radicals and combined like prefixes and suffixes to make more complicated words. For forest, you combine two trees like so – 林 (lin as in Shaolin). For a jungle, add another tree – 森 (sen). The Chinese character itself is a painting.

The media of calligraphy is simple ? just paper, brush and ink. But its simplicity makes it unforgiving. Any mistake in the stroke will be preserved forever. Thus, the very act of painting is performed in such a way that the artist must capture the energy of the stroke ? the very qi of the moment ? in the process of painting the character. Calligraphy is done fast, in sword-like brush strokes, and is a dynamic performance art. With the audience pressure, the painter has only one shot at nailing the character. When calligraphy is good, you can see the essence of what it is meant to represent. You can see the primal drawing. And you can see the qi of the moment.

Now, flash you mind back to the initial part of the demonstration. Dechao just took dozens of big shots to his hand. He’s just slammed it as hard as he could into the gallery’s cement floor. That kind of impact would unsteady the hand of any painter. To be able to paint immediately after that ? to capture that moment with ink, brush and paper ? that’s real kung fu.

Thick Strokes of the Brush
Shi Dechao is from Taikang County in Henan Province. As a youth, he studied kung fu from various teachers

from Shaolin that had moved into his area. Like generations of monks his age, he was inspired by Jet Li’s debut film, Shaolin Temple, a 1982 Asian blockbuster. Dechao made his pilgrimage to Shaolin in 1989 while still a teenager. He was accepted under venerable monk Shi Suxi (1924-2006) and went to work at Shi Deyang’s school, the Songshan Shaolin Wuseng Houbeidui. There Dechao performed in kung fu demonstrations, taught and handled some official school administrative business.

From childhood, Dechao has always liked iron palm practice. He enjoys striking sand bags. While hiking on Song Mountain, he’ll slap stones and trees. If there’s nothing around, he’ll strike his own body. Dechao studied iron palm under several teachers at Shaolin including Shi Yanshou and Zhang Guangyin. He meditated deeply on what the different teachers taught him. There are many different ideas and perspectives on Iron Palm, even within the confines of Shaolin Temple itself. After a while, he synthesized his research into his own practice, adding his own experiences to the discipline.

“I tried to feel where your power came out from,” recalls Dechao. “I was trying to discover lidao (力道 way of power) and xinsi (心思 literally ?heart mind’ but the characters combine to mean ?idea’ or ?inclination’). Your power comes out differently if these are different. So your iron palm practice has to follow your xinfa (心法)” Xinfa literally means ?heart law,’ but in martial arts it refers to a way of training that is always hidden, revealed only to direct disciples. There’s a saying ? kou chuan xinfa (口傳心法) ? which refers to only using your mouth to transmit the way. This implies that xinfa isn’t written down. It’s only given to disciples from warm hand to warm hand.

Dechao’s calligraphy grew out of a quest for harmony. When he was young, he didn’t write very well. As he learned more about Shaolin culture, he realized that he should pursue the discipline to balance his practice. “You have this combination of scholar and warrior, of heart and mind. Add compassion and mercy. I don’t emphasize the perfection of calligraphy, but I add all these elements into my art and I figure I won’t be too wrong.” He began using calligraphy to practice his martial arts. When Dechao paints, he practices his kung fu. At first, being frugal, he used water and wrote on the ground. Sometimes he just used his hand and wrote in the air ? it was just like practicing kung fu forms. Later, when he got some money, he purchased some brushes and paper and practiced more conventionally.

Before Dechao begins painting, he lights some incense and bows to Buddha. It’s a ritual that he observes whether in front of an audience or in the privacy of his own lodgings. At Shaolin, Dechao works his calligraphy the same way he trains kung fu. He emulates the masters. In kung fu, that means following the forms. In calligraphy, that translates into copying the sutras. “I think this is the best use of my time. At the same time, I practice with my mind and body. I use calligraphy to show the qi. Many can’t see it or feel it, but you can see it in calligraphy.” 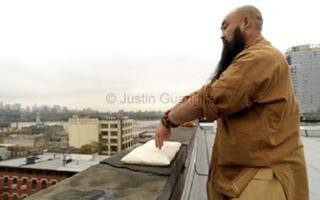 Heavy Strikes of the Palm
According to Dechao, as long as you use the right method, it only takes a couple of months to be able to break bricks with iron palm. But you can’t be in a rush. Kung fu implies a skill achieved over time and effort, so for true kung fu there are no short cuts. “You can hit yourself first, and gradually move to (bags filled with) mung beans, and then stone. You can hit flagstones. In the beginning I used liniments, but later I didn’t get any more swelling, so I moved away from that.

“But if you don’t have the right xinfa ? if you are only trying to strike, to kill, to win or be number one, then this is path of possession by evil. The most important thing is your mindset. Most people use iron palm to concentrate their power. One fist to crush bricks. One fist to kill people. But for me, that’s not right. That’s terrifying. Iron palm is really not supposed to be like that.”

Beyond xinfa, the other important element to practice for Dechao is breathing. For breathing, he relies on Buddhist chants. He chants amitoufo (阿彌陀佛) with every strike. It helps him concentrate. Amitoufo is the phonetic translation for Amitabha, the most common chant from Chinese Buddhists. Amitabha is the Buddha of Infinite Light worshipped by the Pure Land Sect of Buddhism. Based on this chant, Dechao’s pattern is simple. Here’s an example:

Dechao sees no distinction between the kung fu of iron palm and the art of calligraphy. Both are disciplines that must be practiced fully with heart (xin 心), body (shen 身) and form (xing 形). “Heart is always first,” preaches Dechao in earnest. “If that’s not right, you can’t do it right. Only when heart and mind are balanced can you find the correct way.”

John Chatwood and the Deadly Combinations of Shinto Yoshin Ryu