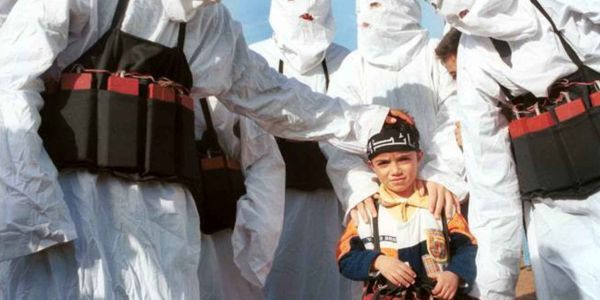 “Homicide Bombers will be the next wave of attacks in this country [U.S.].”

Definitions
“The readiness to sacrifice one’s life in the process of destroying or attempting to destroy a target to advance a political goal. The aim of the psychologically and physically war-trained terrorist is to die while destroying the enemy target.”

“Events where the ‘success’ of the operation cannot occur without the death of the perpetrator, and he or she is apparently aware of this in advance.”

“Operational method in which the very act of the attack is dependent upon the death of the perpetrator….”

Profile
It is highly probable that much of the information you have learned about profiling suicide bombers is incorrect?

Case Study Profile;
1. Moeed Abdul Salam;
Grew up in a well-off Texas household, attended a pricey boarding school and graduated from one of the state’s most respected universities.

“A classmate, Wadiya Wynn, of Laurel, Md., recalled that Salam played varsity golf, sang in an a cappella group and in the chamber choir, and that he hung out with a small group of “hippie-ish” friends.She thought he was a mediocre student, but noted that just being admitted to Suffield was highly competitive.”

2. Loula Abboud;
Was the first suicide bombers to attack Israeli forces in the Middle East: she was a secular, middle-class 19-year-old from a Christian background who blew herself up in front of a group of Israeli soldiers in Lebanon in 1985.

3. Ayat Ahkras;
Was a shy eighteen-year-old Palestinian high school student who blew herself up at a supermarket killing two people. She was a straight “A” student that was engaged to be married. She had aspirations of going to college and becoming a news reporter. Not devoutly Muslim, nor openly active in any militant groups.

In her New Yorker article writer Nasra Hassan, an international relief worker, spoke to several operatives within the Palestinian suicide-bombing network. She concluded and dismissed the ‘myth’ that young people who sacrifice themselves are poor, uneducated, simple-minded or depressed. The “living martyrs” she met were middle class — two were the sons of millionaires — well educated, employed and, within their own communities, model citizens.

The Use of Women as Suicide Bombers
“Although women make up roughly 15% of the suicide bombers within groups which utilize females, they were responsible for 65% of assassinations; 20% of women who committed a suicide attack did so with the purpose of assassinating a specific individual, compared with 04% of male attackers.”

Why female suicide bomber are being used?

April 25, 2006: Twenty-one year old Anoja Kugenthirasah was described as “an intensely beautiful woman,” says Army Chief of Staff Maj. Gen. Nanda Mallawarachchi.” She attempted to assassinate top Sri Lanka Army commander Lt. General Sarath Fonseka by blowing herself up in front of his vehicle. How did she accomplish this?

Some signs that suicide bombers display can be seen in the acronym A.L.E.R.T., which stands for Alone and nervous, Loose and bulky clothing, Exposed wires, Rigid mid section, and Tighten hands. Women are becoming more involved. An example of this is the recent events surrounding the capture of an underwear suicide bomber. Suicide bombers are successful because they use their imagination and come up with different scenarios that are not expected. They are coming up with new ways to prevent ALERT detection. In 2008 the FBI and the DHS sent warnings about a new type of suicide tactic carried out by women who appear to be pregnant, but were really wearing pregnant prosthetic bellies filled with explosives.

Aiming at the center mass, as Law Enforcement personnel are taught, won’t work on most suicide bombers (Person-Borne Improvised Explosive Device or PBIED). How to attack a PBIED is influenced by two considerations;

A bomber wearing a chest bomb device does not allow the use of the center mass concept, as this will detonate the bomb. The only option is the T-Zone, which is a head shot.

Non-armed Neutralizing Techniques of a Suicide Terrorist
Both Avi Nardia’s KAPAP Combatives and Jim Wagner’s Reality Based Personal Protection teach techniques to neutralize a suicide bomber. We highly recommend that you attend Jim Wagner’s Terrorism Survival Course or any of Avi Nardia’s courses. Their techniques will also be shown and better understood in my Assassination Survival live event. Here are techniques that can be used against a suicide bomber: