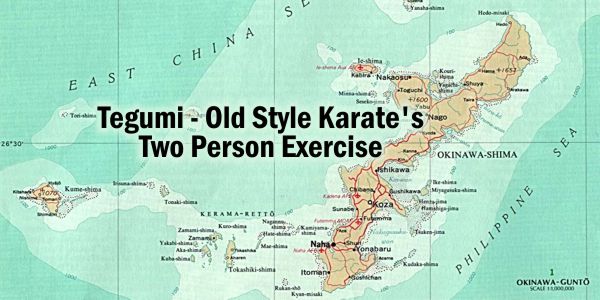 Tegumi or Okinawan grappling and wrestling

Just as a great dish needs a recipe or an extensive trip needs a map, so too does the path of learning and practicing karate need a plan of action.

Imagine that you are walking home late one dark and humid summer evening. It has been a tiring day and you are eager to get inside, close the door and go to bed. As you wander along, thinking only about reaching your house you hear rapid footsteps behind you. A quick glance over your shoulder reveals a man approaching. He is moving quickly towards you. There’s no one else in sight – no one on the street except you and the stranger. The house suddenly seems a long way away. In less than an instant, he grabs your hair from behind and pulls you towards him. Without hesitation you shout, take hold of his hand, grab and squeeze his groin and turn around to face him – he is now bending over in pain holding your hand to relieve the pressure of your grip – you, without pause, take advantage of his posture and kick him on the knee of the leg supporting his weight – he goes down to the ground providing you with a split second to run away.

This illustrates the true nature of self-defense and is at the very heart of Old Style Karate training.

An elaborate system of movements of the arms and hands, legs and feet and a flowing posturing of the body, Old Style Karate uses simple yet brutal techniques to defend against a violent aggressor. These techniques are cataloged and preserved in the kata (forms) of Old Style Karate traditions.

Kata combine several sequences of movements and postures illustrating a prototypical defense, i.e. a model technique or specific technique that works under exacting circumstances for a given attack. Each ‘posture’ requires the body move in a certain way and has a particular meaning relevant to self-defense, therefore it is useful to consider sequential movements or postures within kata independent of the complete form.

Each movement and posture built into kata has a series of possible applications from the defensive themes outlined above and are taught as a standard or template. When practiced solo, kata are used as a mnemonic devises to aid the student in their learning process.

In modern day karate, we think of kata as an end in itself and as a numinous paradigm in which repetitive practice will result in a sudden illumination of self-defense. However, self-defense cannot be learned from the solo performance of kata. In fact, as Hanshi Patrick McCarthy states, “kata doesn’t teach self-defense but represents an accumulation of self-defense techniques and lessons already learned by the practitioner! ”

In Old Style Karate practice, learning self-defense typically involves performance of individual defensive composites of formal kata with a partner. Practice, of this nature, incorporates the reenactment of realistic attacks, i.e. chokes, grabs, bear hugs, etc., and a corresponding defense. In Old Style Karate, this training method was known as Hand Tapping & Grappling flow Drills (Tegumi Renzokugeiko or Tegumi). Through the practice of tegumi, the meanings and principles of the movements and postures (defensive composites), integrated within kata, are revealed to the learner.

When practicing tegumi the learners apply various methods of stomping and kicking with the feet, checking, trapping, hooking and deflecting with the forearms and hands, bumping with the body, grappling, joint locking and striking the vital points with the knuckles, fingertips, etc., in a “continuous flowing” motion using relatively short drills consisting of defensive composites extracted from traditional kata. Concentrating on a limited sequence of movements enables the learner to become accustomed to the feel of the drill quite quickly and allows techniques to become a reflexive action. In this respect, tegumi training is vitally important because in an actual self-defense situation it is important that the execution of techniques is intuitive and automatic, i.e. made on the basis of reflexes; this reflexive response comes from numerous repetitions of tegumi drills.

During tegumi practice, both partners alternate roles between active and passive, attacker and defender. This methodology offers each learner with an opportunity to focus on and learn the mechanics behind a specific attack and defense and lays the foundation for a more intricate investigation of the techniques. In addition due to the constant pounding and grabbing of the body and limbs, tegumi practice conditions the body to be better able to absorb the impact of an attack.

Initially the drills are practiced from a moderately fixed position, however as the learner internalizes the basic form of a technique and its underlying principle and can perform the basic technique with some precision they must begin to progress from a more rigidly defined practice to a more fluid and adaptable execution of the techniques in a more realistic (but safe) training environment. This requires both partners to apply more vigorous footwork and movement of the body and increase their speed and power in the execution of the attack and defensive technique.

As the learner advances, tegumi practice also presents the learner an occasion to experiment and adjust their application of a technique to adapt to variable factors including; speed and rhythm of attack and defense; distances and spaces between you and your partner; and variation in the exertion of power applied in the attack and defense. During this stage of learning, each participant must put their attention first on their own body mechanics to avoid focusing on your partner’s faults and mistakes without first correcting your own.

During a more intricate practice, tegumi provides a means to safely investigate the numerous possible variations of a given attack and defense and presents an opportunity in which each partner may observe weaknesses in the posture and technique of the other in an effort to exploit these weaknesses during the exchange by calling on principles learned earlier

The kind of dynamic training tegumi imparts simulates real encounters and as a practice is indispensable for the practitioner who wants to adequately defend himself or herself in a real fight and to distinguish the real applications of kata.

In the ultimate sense, tegumi brings together all the basic techniques into a comprehensive study, transforming kata from a state of stagnation and casual appearance to a state of shining brilliance through the crisp fluid movement of tegumi.

The Pinan / Heian Kata Series as a Fighting System: Part...

Donald Miskel - August 31, 2016
We use cookies to ensure that we give you the best experience on our website. If you continue to use this site we will assume that you are happy with it.OkRead more