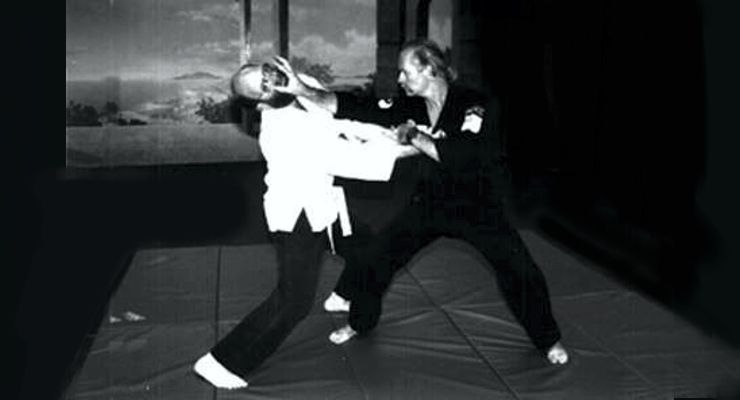 Terrence Shea is 69 years old and has been studying martial arts for 50 years. He lives in New Mexico and is semi-retired, teaching privately and for the community. He holds a 3rd degree in Chinese Kenpo, a 1st degree in Song Mu Kwon Tae Kwon Do, a Black Belt in Jiu Jitsu, and has trained in boxing, kickboxing, Krav Maga, Wing Chun, Chin Na, and holds an 8th degree Black Belt in TAI Martial Arts, as president of the Board of Promotions.

Terrence Shea has owned four schools, and was the head instructor for TAI Kung Fu in Denver in 1978. His instructors were David German, Ken Galster, Joe Olivarez, and Crystal Suan, John Salazar, Tim Boucher, and too many others to name here.

In His Own Words: Terrence Shea’s Journey in the Martial Arts

I started in the Arts in Japan during a stay there on R&R in 1968. I visited a local bar and met a bartender there who was practicing some moves behind the bar. I asked about it and he replied “Shorin Ryu. Karate”. I professed an interest and made it clear I wanted to know more. Every time I went there he and I would work out. The girls at the bar treated me as an honored guest, not like a soldier on leave, which I found gratifying, even though I was usually the only sailor there. (It was a local bar, not a GI bar)

After my tour, I came back to the states, and sort of drifted for a couple years. Then, in 1975 or 76, while shopping with my girlfriend at Cinderella City Mall in Denver, I saw some black clad martial artists in a kiosk, who waved me over, and asked me if I wanted to see a demo. I said yes, and they proceeded to awe me with blinding speed and precision strikes that I felt with every motion. I joined up right there. I trained as a student for a year, then my instructor, Geoff Sparks, asked me if I would like to join as a protege instructor, in which I would move in with them full time. I decided to do it, though I was not sure if I was making a good decision. The first day there, I was instructed to do 1000 of every punch, kick, and block they taught. It took over three hours, and I was drilled mercilessly by Seth McGuire, another teacher and close friend. Like being in the worst boot camp you can imagine. At the end, I wondered if I had made a very big mistake. The next day I couldn’t walk, had to drag myself to the bathtub and soak for over an hour. I was late for morning class. I did this routine for 6 weeks, by which time I was in the best shape of my life. After a year of teaching and training 12 hours a day, I became head instructor.

In 1980 I left and opened my own schools in California, the Bay Area. During that time I met a neighbor who was a 2nd dan in TKD. He was very impressive, an outstanding martial artist and one of the most natural athletes I had ever met. Knowing my legs were my weak point, I trained under him to my black, about 4 years, three times a week. During this time I met other very good martial artists, including a man who showed me the value of the practical, Brian Odell, another amazing and talented martial artist. I then opened another school, and found another instructor named Joe Olivarez, who was a Gaylord Kenpo Practitioner, and boxing instructor. Another outstanding instructor and good man. I earned my 3rd dan under him ( already had a 1st dan), and he also trained me in boxing. I spent 4 years with him, and taught his Jiu jitsu classes, while I taught along with another instructor of mine at my own schools, 4th dan Mark Gapol from KaJuKenBo, second dan Chris Wallace from TKD, and both Chris’s sons both of who were very good black belts in TKD. I also attended seminars held by ATAMA, the American Teacher’s Association of Martial Arts, which put on seminars every three months of many different styles and masters. I went faithfully, and became friends with some of them, exchanging info and techniques, and volunteered as a demo dummy for people like Janet Gee, Bill Dewart, Carly Gracie and others, knowing the best way to learn was to feel it. Janet was always my favorite, gentle and fierce, an incredibly talented practitioner of Gung Fu. In the few times I worked with her, I learned more than I had with many others. Look her up on you tube, she is awesome. Along the way, I picked up Chin Na from David German, the founder of my style, TAI Martial Arts, and earned another black in Goshen Budo Jiu Jitsu. Under David, I eventually earned my 8th, though it took many years to get there. That is the reason for my rather eclectic style.

During my time in the Bay Area, I started a bodyguard service for victims of violent crime, and became the only school in northern Cal to be recommended by the 800-VICTIMS hotline. I guess I am blowing my horn, but I do admit to some pride in that, and I rarely tell others about it. It’s in the past, but it was an accomplishment I really never expected. Part of my hero complex I think, having been bullied growing up. At this time, I got interested in Iron Palm, started reading and watching videos on the subject. and eventually got to a point where I no longer had to worry about hurting my hands, no matter what I did, or how badly I missed :o) During all that, over a 50 year period I managed to sustain many injuries and broken bones. My enthusiasm cost me quite a lot, but I am OK with that. It has become part of my life in a way I can’t explain. But I came to know the value of patience, compassion, and kindness through it all, by seeing other martial artists treat others badly, and well. I think that power misused is power wasted, and I have no use for those who mistreat others. There you have my mostly complete history. I will always support the underdog, the victims, and the abused. As an addendum, several years ago I was elected to the position of President of the TAI Martial Arts association. not because I was the best, or the highest ranked, but because I was one of the people who showed up, and had my own ideas about what TAI encompassed. I did a short demo for the group which included Jeff Speakman and Kathy Little, both of whom I hold in the highest regard, Gary Marino, Head of Family and an fierce fighter, Seth McGuire and Geoff Sparks, (They trained me to be an instructor and did it with no mercy), Aaron Shuman, a student and instructor under GM Ralph Andersen Ralph had passed away just a short time before, leaving a gap in the system. Ralph and I had trained at the same time in different locations, both of us under Kenneth Galster, who was renowned as an exceptional trainer. Now I teach mostly privately, but, nearing 70, I am more interested in bringing all the TAI schools together in this country, and standardizing principles and concepts in the Art.