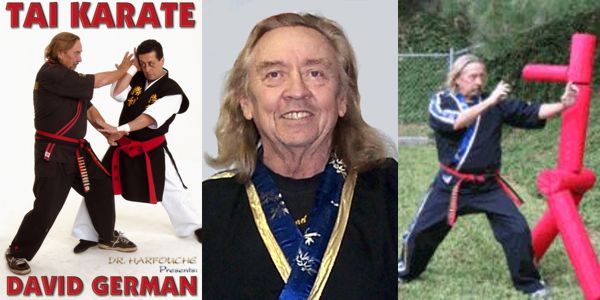 David German celebrated his fiftieth year in the Martial Arts at age sixty-three and was recognized as a Judan, tenth degree, by over 20 worldwide martial arts organizations. He wrote, directed and starred in a television instructional series that ran over 700 half-hour segments from 1974-1981 (The Art of Karate with David German). He is considered the highest paid martial demo performer in America, performing over a thousand martial shows in Las Vegas during the years 1962 to the present, as well as spending eight years performing a martial segment for the Las Vegas extravaganza Lido De Paris. He’s an award-winning inventor of martial training equipment, a sports columnist, a radio personality and past president of the U.S. Stuntman’s Association. He is a California state-licensed boxing trainer and owner of a rarely-licensed boxing gym. He has a series of four video tapes available through Panther Productions. He was featured on the cover of BLACK BELT Magazine twice in 1981 (once as the featured cover practitioner). The answer: David German, founder of the TAI (Transition Action, Incorporated) Kenpo/Karate/Kung Fu system. 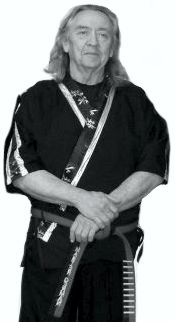 David German was determined in his belief that he could prove the credibility of classical Kung Fu by fusing it to the non-classical arts of boxing and hardcore grappling. At age twelve he earned a black belt in Jiu Jitsu from Sensei Kimura of the now-defunct Japanese Youth Center in West Covina, California. At that time Al Thomas’ Budokan Academy in nearby El Monte was special to American martial artists as the Mecca of Malibu Beach is to surfers. It was here that he began study with Sifu Leonard Lum of San Francisco via Hong Kong, who taught him the systems of Sil Lum Kung Fu, White Tiger (Bok Fu Pai), White Hair, White Eyebrow (Bok Mei Pai), Chin Na and Chuan Fa. He did find time in those formative years to study with Ed Parker of American Kenpo, earning a black belt and eventually owning two studios with Parker at the age of sixteen.

In TAI Karate, we may box to open against an attacker, then flow into Kenpo, then Sil Lum to Chin Na, then grapple to finish the fight.” Does this mean that grappling is the end-all, the most effective art? “All I will say is that a good grappler can fight multiple opponents and win – against five guys you’ll be on the ground anyway,” said German.
German is no “paper” white tiger when it comes to demonstrating his grappling prowess. Eighteen years ago, he singlehandedly wrestled the entire San Diego State wrestling team, including its coach, until all submitted, to prove the worth of his uniquely-designed grappling art. “… six straight hours, non-stop, and I broke and arm and rib that day,” German chuckles. “I also wrestled Brian Adams’ Kenpo people that day. Brian had the wrestlers down for Kenpo lessons, so I obliged. The Kenpo schools like our grappling method because it makes you mentally tough, and it’s a toughness you can’t get from Kung Fu or Karate. Still, the Martial Arts are the ultimate in self-defense for time spent. A good boxer or wrestler must spend several hours of contact, conditioning. In Karate, you can luck-out with a kick from any angle. ~ Master German

Sadly, Grand Master David German passed away on May 13, 2006. He lived and taught many in the San Gabriel Valley most of his life. He was admired by Martial Arts Masters and students everywhere. His funeral service was held on May 30, 2006 at at Rose Hills Memorial Park and Mortuary, Hillside Chapel.