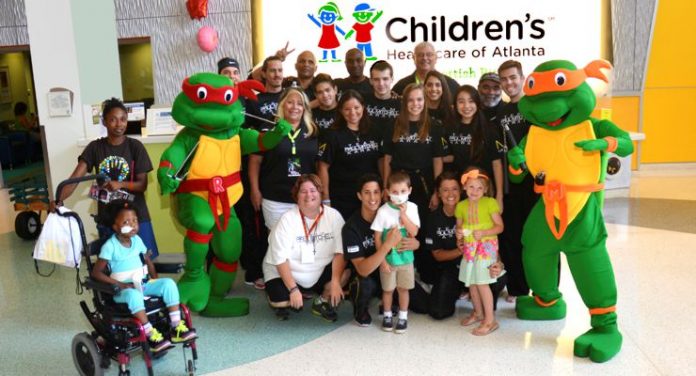 Team Mitchell travels to Battle of Atlanta and they go out of their way to help children with different kinds of battles!!!

First of all, let me introduce to you ‘the Battle of Atlanta’. People who are up on history might recall the first Battle of Atlanta was fought during the American Civil War just southeast of Atlanta, Georgia. Gentleman Joe Corley was sorry he had to miss that ‘Battle’, because Yankee General Sherman defeated the confederate forces of John B. Hood who made a gallant but futile attempt to defend the city. Many feel that Joe being at that “Battle” would have made the difference that could have made the difference.

I’m from Chicago though, and one thing I heard when I moved to Atlanta, was that the south was still fighting that war. Fact or fiction, I don’t really know… but it may have something to do with Joe, a young 19 year old black belt ranked among the top 10 karate fighters in the country, hosting his very first karate tournament. What did he name it? Of course; the Battle of Atlanta. And he invited fighters from the north, of course. But also from the west, east and even from the south to come to Atlanta and re-engage in the Battle of Atlanta. And they have been coming back for 46 years to battle it out. But through the years, the line drawn between north and south, black and white, or rich and poor faded from the heart and minds of all those who competed. The winners today, seized trophies, medals and titles instead of railroads and supply lines. Instead of damage done, friendships were built… and champions made.

Joe Corley and his partner, Chris McLoughlin, hosted the very first Battle of Atlanta in 1970 and it was won by LA’s Joe Lewis, with the likes of Bill “Superfoot” Wallace, Glenn Keeney, Thomas Lapuppet, Mitchell Bobrow, and Joe Hayes participating. Through the years that followed many Champions as well as film stars have been prominent at the Battle of Atlanta, most notably Chuck Norris and many of the other stars from Walker Texas Ranger, Jean Claude Van Damme, Keith Vitali, Don the Dragon Wilson and Pat Johnson. There were fighters like Howard Jackson, Jeff Smith, Jerry Rhome, Rick Roufus, Jean Yves Theriault, Jeff Gripper, Earnest Hart, Jerry Trimble and last but not least, repeating his championship win from last year, the Grand Champion for this year’s Battle of Atlanta, Raymond Daniels.

The ‘Battle’, as we know it, is just a competition over who gets to take home the iron, the plaques or the ribbons. Over the years, though, the Battle of Atlanta has stood for far more than many of us realize. The Battle of Atlanta has supported the Armed Forces in numerous ways, as well as the heroes of 911, and the Wounded Warrior Project, and most recently, the Children who are in a ‘battle’ every day of their young lives at the Healthcare of Atlanta at Scottish Rite.

This last weekend the 46th annual Battle of Atlanta World Karate Championships was held at the Renaissance Atlanta Waverly Hotel Convention Center. The tournament was scheduled to begin on Friday afternoon. But before they would start, the premiere performers put everything aside, boarded a bus and made a visit to some fans who wouldn’t be able to go to the tournament.

Greg Ruth and Lynn Gregory arranged for former professional wrestler Ernest “the Cat” Miller, World Championship Wrestling (WCW) and World Wrestling Entertainment (WWE) fame and 3 times World Karate Champion to join Don Rodriguez and the Team Paul Mitchell to visit the boys and girls at the Children’s Healthcare of Atlanta who were in a battle of their own.

Children’s Healthcare of Atlanta is one of the largest childhood cancer centers in America, the highest volume of pediatric heart surgeries in the country and their three emergency departments are among the busiest in the nation, seeing an average of 600 children a day. By the care they are given in the Children’s Hospital, the children are used to knowing what the “best” means, and now they were going to see the best there is in Martial Arts. The children know what “battle” is and possibly the encouragement provided by our group’s one on one love and support, will add some strength to the obvious strength these children already have. But, if that falls short of the mark, what would any child’s Martial Art mean without the Ninja Turtles? So Raphael and Donatello will be there, too.

As people began to show up, something of an anomaly quickly took place as the boys and girls dressed in hospital gowns, flip flops and pulling their IV poles with the life support IV pumps gathered in the main lobby. They seemed totally unmindful to their own condition as they soaked in the energy that filled the room by the martial artists, and by what they, themselves, expected to see. The demonstrations amazed everyone, the children, parents and the hospital staff.

But when it went beyond watching, to experiencing, the connection was truly made. The Team Paul Mitchell separated and went to each child one on one and knelt down and talked with them, face to face. They signed autographs, gave the gifts they brought with them and had photos taken together. The Team Paul Mitchell went to the hospital to touch the hearts of the patients and possibly spread hope, but unexpectedly, the patients touched the hearts of the Team in a way that made a dramatic change in each member.

After the weekend I talked with the founder and manager of Team Paul Mitchell, Mr. Don Rodriguez. I wanted to know how the Team was affected by their visit to the Children’s Hospital.
Mr. Rodriguez told me that a meeting was held when they returned to the hotel to discuss the upcoming competitions but their talk kept reverting back to the hospital visit. He said that everyone on the team was deeply touched by the hospital visit and not much was achieved in their meeting concerning any plans for the competition.

I asked, “What effect did taking your focus off the tournament have on the results of your team in the competitions?”

Mr. Rodriguez said, “We won all we went after and we won with larger margins than ever before.”

Mr. Rodriguez explained, “We won because we were already winners, there was no struggle to win. Our victory was at the hospital and we couldn’t help but bring it with us into the competition. We competed as though we already won.”

And then he added, “I hope you realize it wasn’t the children alone on the receiving end. It was also for the mothers and fathers who were there… can you imagine the joy they felt seeing their child smiling, happy and excited about something in which they were involved.”

I also talked with the young lady from the hospital who arranged this event, Melanie Turner. She said,

USAdojo - September 12, 2019
We use cookies to ensure that we give you the best experience on our website. If you continue to use this site we will assume that you are happy with it.OkRead more