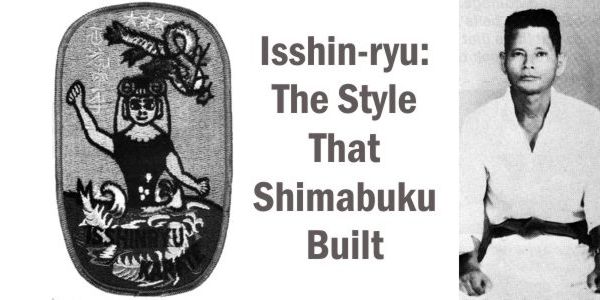 Isshin-Ryu karate was founded by one of the great karate masters, Tatsuo Shimabuku, and is derived from several of the other, older classical styles.

Master Tatsuo Shimabuku, began learning karate at the age of 14 and devoted the rest of his life to its study and teaching. For 26 years he studied the other styles, Shuri-Te, Shorin-Ryu and Goju-Ryu, each one under the master of its style.

Isshin-Ryu, with roots going back 500 years, is a postwar development, modernized to meet the needs of today’s world. It was founded in the 50’s and has been taught ever since to American Marines stationed in Okinawa.

Shimabuku’s reputation throughout Okinawa had reached its peak when WorldWar II struck the island. A business man as well as a karate teacher, the sensei’s small manufacturing plant was completely demolished and he was bankrupt almost from the war’s outset. He did his best to avoid conscription to the Japanese Army by escaping to the countryside where he worked as a farmer. As the situation grew more and more desperate for the Japanese and as the need to press the Okinawans into service became urgent, he was forced to flee.

As his reputation in karate spread among the Japanese, many soldiers began a thorough search as they wanted to study karate under him. The officers who finally caught up with him agreed to keep the secret of his whereabouts if he would teach them karate; it was in this manner that Master Shimabuku survived the war.

After the war, his business ruined and little chance of earning a living by teaching karate on the war-ravaged island, Master Shimabuku returned to farming and practiced karate privately for his own spiritual repose and physical exercise. Throughout Okinawa, he was recognized as the island’s leading practitioner of both Shorin-Ryu and Goju-Ryu Karate.

In the early nineteen fifties, the sensei began to consider the idea of combining the various styles into one standard system. He could forsee the problems that were developing out of the differences among styles; he sagely concluded that a unification or synthesis of styles would enhance the growth of karate.

He consulted with the aged masters on the island, and with the heads of the leading schools. At first there was general agreement, but later his idea met resistance as the leaders of the various schools began to fear loss of identity and position. Sensei Shimabuku decided to go ahead on his own; thus Isshin-Ryu Karate was born. On May 30, 1975, Master Shimabuku passed away, leaving a legacy to the world of karate, and to all the future Isshin-Ryu students. 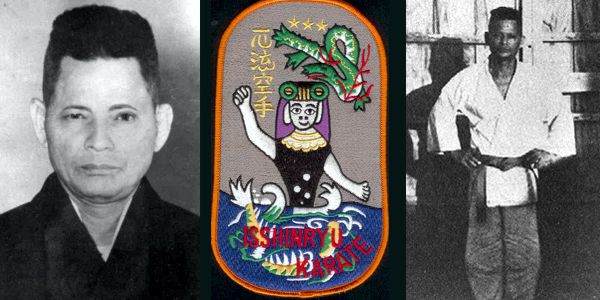 Mizu Gami
The Isshin-Ryu symbol represents a vision that Master Shimabuku had while formulating Isshin-Ryu.

One day after working very hard creating Isshin-Ryu, Master Shimabuku fell asleep. He dreamed that a man came into his dojo and challenged him. He declined the challenge saying he was a gentleman and did not fight unless necessary. Then a figure appeared over the man, that of a dragon. The dragon spit fire all around the Master. As the ring of fire drew closer, a figure appeared over Master Shimabuku, and put out the fire. The figure was that of Mizu-Gami (Water Goddess). 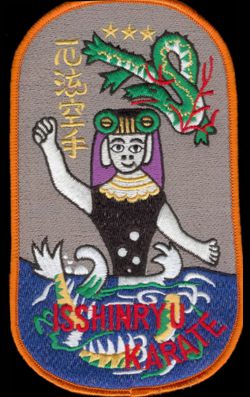 Master Shimabuku felt this “vision” depicted the “mold” that he wanted to fashion Isshin-Ryu after. There is some symbolism in the visual representation of Mizu-Gami.

The three stars are his three instructors, Masters Kiyan, Motobu and Miyagi. The dragon is the dragon that spit the fire at Master Shimabuku. (It is interesting to note that Master Shimabuku’s first name “Tatsuo” means “Dragon”). One of the hands on the figure is raised in the universal sign of peace, and the other is held clenched in readiness. The visible half is a woman to symbolize peace and kindness, while the hidden portion is that of a sea serpent. This tells us that although we are strong enough to prevail when necessary, we should keep our strength hidden and show a soft, kindly face to the world.

The History of Karate in America