One method Progressive Protective Systems (PPS) practitioners use to develop trapping skills is knife sparring within a confined environment. Knife fighting usually occurs with fighters at a distance beyond the reach of the blade in what resembles fencing with shorter implements. Here combat is erratic and twitchy with opponents using catlike movement in and out of the range of the blade.

When the environment dictates that engagement takes place within close proximity it no longer resembles a fencing match and takes on the appearance of close quarters empty hands combat, with fast and furious action and each opponent trying to deliver the deadly finish as early as possible. 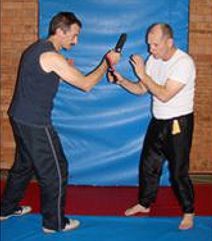 There are parallels which can be drawn between empty hands and blade combat in this range where the premise for the PPS practitioner is to deliver the “hit” on the earliest possible beat. There are no elaborate set-ups for elaborate traps. With a knife, a quarter beat delay in reaction could be the difference between death and survival.

Sensitivity must be heightened to the extreme when dealing with a blade. There is no room for lazy sticking, as can be encountered in empty hands when sticky hand drills are overemphasized without knife trapping drills. Here, sticking to the knife hand may lead to disaster whereas sticking in empty hand combat may lead to success.

Tap / Cut is often the preferred drill over sticky hands when dealing with a knife attack scenario. Here “detached sensitivity” and attack line familiarization are developed, as well as tactile sensitivity. 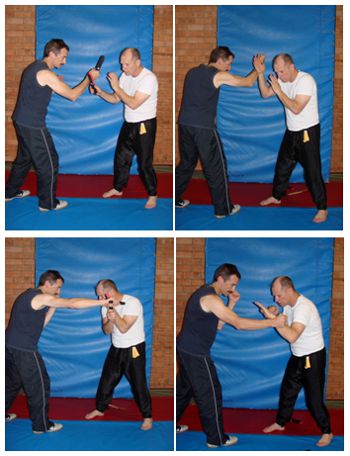 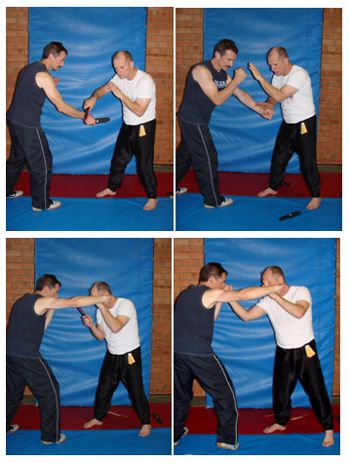 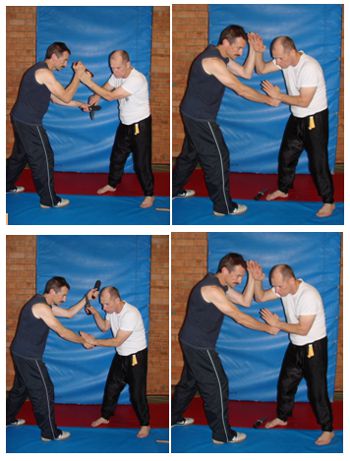 Contact is often short in time with repetition of the make contact-break contact cycle. From the short contact a trained fighter will be able to determine line of force and amount of force. The attack can be nullified with an automatic counter launched on a line of attack which is for a moment, unobstructed.

When the attributes developed with the knife are translated to trapping with empty hands, the results are techniques performed more crispy and explosively with less of an emphasis on sticking.

Conclusion
The knife is an invaluable tool for the PPS practitioner to develop trapping skills and high end trapping attributes. Knife fighting has the “hit” (stab or cut) principle as its primary means of survival in this range. In this environment, simplistic and functional take precedence over intricate methods of limb immobilization or disarming. Training with the knife improves empty hand trapping by its crispness while sharing important characteristics such as simultaneous attack and defense, reflexive striking, checking for body disruption and detached sensitivity.