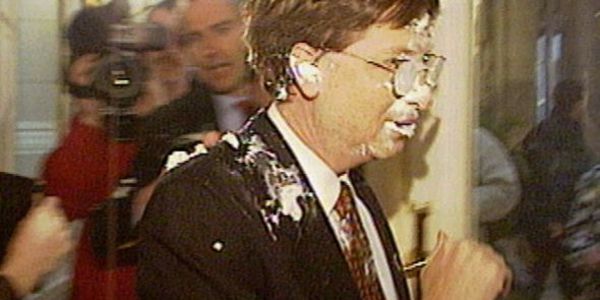 Noel Godin who was the person behind the Bill Gates embarrassment stated “The bodyguards were completely distraught,” “None of them even took out his gun. They were as dazed as Bill was.” Bill’s guards were not prepared for the surprise. They did not see a man with a pie as a threat. Godin’s “gang of bad hellions  . . . have declared the pie war on all the unpleasant celebrities in every kind of domain.”

Certain groups such as The Biotic Baking Brigade (whose motto is “Speaking Pie to Power”), and Les Entartistes, make it their mission to use the pie tactic.

“The pie gives power back to the people because so many [people] feel powerless in the face of big politicians and industrialists“, explained Pope-Tart (a pseudonym), a member of the Entartistes.

Activist David Horowitz said of his pieing, “These attacks are sinister. The person who throws a pie is saying, ‘I hate you. I don’t want you to speak.’ I never saw it coming. And it took away my dignity. When you’re lecturing, you’re supposed to have an authority. But a pie turns it into a food fight.”

If you have a client on the other side of the world, you probably won’t have to worry about pies, but you may have to worry about another weapon of embarrassment that can do far more damage than a pie, and almost everyone has this weapon right on them. Countries like Australia, India, Ireland, Hong Kong, Pakistan, and the Arab countries all use this tactic. It’s called “Shoeing” and the most famous incident was the Shoeing of George W. Bush on December 14th 2008 while in a press conference in Baghdad. Ukrainian reporter Ihor Dmitriv stated after the incident with George W. Bush that “a shoe is going to become a leading means (for common people) to influence their leaders.”

So, whether its a shoe, pie, eggs, or whatever they throw at your client, you need to be there to stop it just as if it were a gun, knife or an explosive device. It might not kill your client, but by shear embarrassment, it might kill your client’s career or yours.

An Irreverent Investigation of the World’s Richest Man…and the People Who Hate Him Gary Rivlin Three Rivers Press, 18/07/2000

“Pie-Faced: Why throwing a pie at someone who deserves it is one of the most celebrated traditions in our so-called culture”. By Gersh Kuntzman. Newsweek, April 25, 2005.

Stripes and Bars: Don’t Be An Idea Person