EXCREMENT, SHIT, SOMETHING OF NO VALUE. That’s the meaning of the word “crap” according to slangdictionary.com “This guy is full of crap!!!” That’s exactly what somebody wrote on February 27, 2012 commenting about my YouTube video that shows me training one of the world’s top counterterrorist teams German Grenzschutzgruppe 9; more popularly known as GSG9. So that you could understand what was written I took the liberty of correcting “Michael’s” spelling of the word crap; for he had spelled it “krapp!” “Michael” went on to say, “The GSG-9 proved themselves in 1977 in Mogadishu, Somalia. Why on earth would they need this one guy to teach them anything in 2000? There are a lot of “wanna be tough guys/commandos out there” who want to make a name for themselves. No way would an elite team like the GSG-9 need the help of some punk from California. Funny thing is–this guy wants to sound so humble–only adding to his arrogance. This writer goes by the user name michaelmirraandmarc. Here is the link to my YouTube video along with Michael’s comment:

For you self-defense practitioners who know me, or at least know my history, these types of attacks are nothing new. They go all the way back to 1994 when I first got on with the Costa Mesa Police Department SWAT Team; that’s going on 18 years now. Yet, this particular attack from michaelmirraandmarc is so outrageous, in light of the overwhelming proof that I indeed trained the GSG9, that I just had to address it. The biggest proof is the very video that he saw with his own eyes and commented on. Then again, many people comment on things without actually viewing or reading the very subject they are commenting on. Hard to believe, but it happens. If that was not the GSG9 in the video, then who the heck was it? How could anyone obtain that kind of video footage who was not on the inside? It defies logic, but anyway, back to the actual comment.

Michael states that the GSG9 proved themselves in 1977 in Mogadishu, Somalia. That much is true. On October 13, 1977 the Popular Front for the Liberation of Palestine hijacked Lufthansa Flight 181. GSG9 stormed the aircraft in Mogadishu and rescued all 86 passengers. Since then it is a case study for every tactical team in the world who may be called upon to an aircraft interdiction situation. Michael’s following comment is, “Why on earth would they need this guy to teach them anything in 2000?” Of course, we know nothing of Michael’s background because he doesn’t give it. In fact, he does not even give his name or where he is from. We know nothing of Michael, and we certainly don’t know anything about his knowledge on tactics or lack thereof. I answered Michael with a response on YouTube and told him that it was not just in the year 2000 that GSG9 hired me, but it was 1999 and 2000. And, speaking of aircraft interdiction, one of the topics I taught to GSG9, by their request, was dealing with combative subjects (both passive and active resistors) on passenger aircraft. Why did they hire me and pay me good money to teach them? The answer is simple, “Because I had developed techniques and training methods that were of use to them.” Its probably the same reason why the Israeli police and military had me teach them, why tactical teams in Brazil and Argentina flew me out to teach them, why the Caribbean nation of Trinidad and Tobago had me come to their island and teach SUATT, in Mexico, in Holland, in Bulgaria, and not to mention many police, corrections, and military teams within my own country. To say that all knowledge was known in 1977 and there was no further need for expanding training or ideas is ludicrous. A lot of things have changed since 1977. 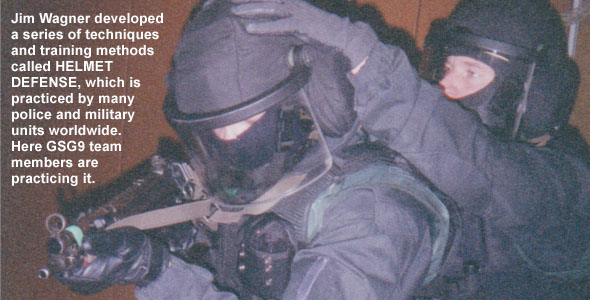 Michael then stated, “There are a lot of “wannabe” (a slang term meaning someone who is not the authentic thing but wants to be) tough guys/commandos out there who want to make a name for themselves.” Is Michael talking about me or himself? He must be talking about me. I believe he is trying to communicate to YouTube viewers that I am a “wannabe” commando. First of all, the American military does not use the word commandos. We don’t have “commandos” in America. Have I been a police officer? Have I been a soldier? Have I been a bodyguard? Have I been a counterterrorist? Yes, on all counts. So, I was not a “wannabe,” but someone who “was” and “is.” How could one answer a half thought of a comment? It’s a comment without any substance. Michael continues, “No way would an elite team like the GSG-9 need the help of some punk from California.” Well, apparently they did; not once but twice, and it doesn’t stop there. GSG9 was asked by Grenzschutzschule (Federal Police Academy) to introduce them to FX Simunitions safety procedures and training protocols when these training firearms were first brought into Germany. GSG9 informed the academy that they did not have the time to do it. They had no instructors to spare at that time. GSG9 recommended me and in 2001 the Grenzschutzschule flew me out to Lubeck, Germany to train the instructor cadre, who in turn would teach the rest of the German police forces. This in turn led me to contribute techniques and training methods to the newly formed German Air Marshal Service in 2002; for many of the Air Marshal agents came out of Grenzschutzschule who had trained under me. This gave rise to training many German police and military units all the way up to November 2011. Michael may not like the fact that I trained GSG9, or other German units, but it is a historical fact and nothing will ever change that. I am part of the GSG9 history, and I am proud of it. Yet, to call me a “punk from California” is quite adolescent. The slang word “punk,” according to Webster’s Dictionary means 1. A young inexperienced person” 2. A petty hoodlum. Using this word was totally inaccurate. When I trained GSG9 in 1999 and 2000 I was neither young or inexperienced. It was for my experience that I was invited in the first place. I was not a petty hoodlum either, for when I was hired by GSG9 I was a police officer veteran of 10 years. A hoodlum is associated with a criminal, and I was on the other side of that fence. Plus, he talks of “California” as if nothing good could come from it. If Michael knew anything about the tactical community he would know that it was Police Chief Daryl Gates who established the first SWAT team in 1968. Out of where? Out of Los Angeles, CALIFORNIA. All police tactical teams across the globe can give credit to my part of the world. And, don’t forget, the reality-based movement for the martial arts and the Jim Wagner Reality-Based Personal Protection system originated in California. The first to start publishing this new way of self-defense training was California based Black Belt magazine. This is just historical fact. Michael ends his shallow comment with, Funny thing is–this guy wants to sound so humble–only adding to his arrogance. I didn’t know that I was sounding any which way. I was just educating the viewer on what I was doing at the GSG9 Headquarters in Sankt Augustin, Germany and apparently over 25,000 viewers wanted to hear what I had to say about it. “Arrogance?” I don’t know, maybe you have to be a little arrogant in this line of work. Its probably just part of what we American’s call an “A-type personality.” You don’t see too many docile cops or soldiers” Michael is the not first person to make strange comments about my association with the GSG9 or other units. I get quite a few personal messages that are quite explicit that could not even be posted for a mixed audience. The Internet is a wonderful source of information, but it is also a forum where people can just spew out untruthful comments without any facts whatsoever or attack someone’s character without any accountability. I’ve developed a pretty thick skin over the years because of people like Michael, but it still surprises me just how many people don’t know how to properly debate, write well, or come up with a convincing argument or are able to adequately express their views. 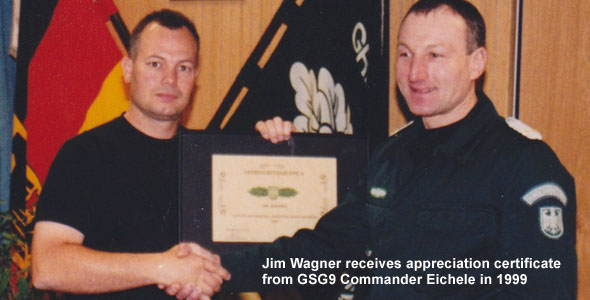 Just recently one of my friends was attacked on his own Facebook Wall. You might have heard of him. His name is Tony Blauer. Tony is one of the most respected self-defense instructors in both the police and military communities, and yet a self-defense instructor actually had the nerve enough to say that most of what Tony teaches was not original material, and that he lifted it from others. My only question is, “Then why are so many people going to Tony Blauer every year to train under him, including some of the top police and military units in the world?” Tony Blauer may not be the first person to develop a protective suit for combatives or defensive tactics training, but his High Gear was a vast improvement over most suits. Likewise, he may not have “invented” the puch or kick, but he packages his material in such a way that people want to lean it an hear what he has to say. Once a month I’m on the phone with my good friend Avi Nardia who popularized the Israeli KAPAP system worldwide. Well, to be honest with you I gave him a little push back in 2003 to get started, and now KAPAP is everywhere. While having our monthly chat Avi always tells me who his latest attackers are. They are always on the Internet because nobody ever dares say it directly to his face. If you know anything about his history you would know why. Ever since he first started teaching KAPAP to civilians he has been a big target of those who are jealous of his success. Like Tony Blauer, Avi does not like the attacks, but he has learned that it goes with the territory. The same with my friend Moni Aizik of Commando Krav Maga, and anyone else I know in the limelight. I call this “the ugly side of the martial arts,” and it is. As far as the GSG9, I can’t say enough good things about them. They are truly one of the best in the world. GSG9 does not mind my video up on YouTube, for I show no LAW ENFORCEMENT SENSITIVE footage, and I don’t mind showing it. For every 1 Michael there are 25,000 who like it. I wish I had those good odds in Las Vegas! Be A Hard Target.

Your Phone Is Your Best Weapon