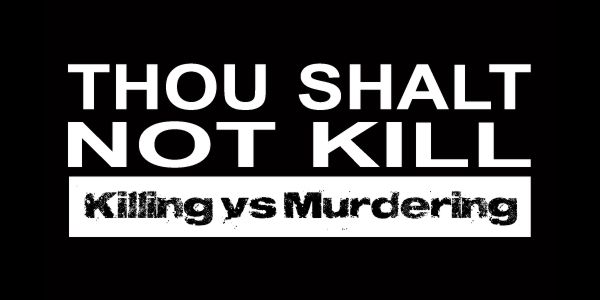 You have heard the commandment, “Thou shall not kill.” With few exceptions, however, most major modern translations, and all Jewish translations of the original Hebrew, interprets the commandment as, “You shall not murder” (Exodus 20:13). Have the rabbis, ministers and priests of the Judeo-Christian Ethos been hypocrites for the past 5,000 years when they sent men off to war? Did they say, “Thou shall not kill” one day and then send them off to battle the next? Now, the Seven Day Adventists, Mennonites, Shakers, and Quakers believe in the strict, literal 385 interpretation of this translation of the Sixth Commandment, and in the end they may be right. The vast majority of the Judeo-Christian Ethos, however, understand it to mean, “Thou shall not murder.”

While we are here on earth, we all place our “bets” in the great “spiritual lottery” of the afterlife. After we die, everyone from the atheist to the most devout believer will know if their bets have paid off. For the sake of argument, let us assume that there is a God and He is the God of the Judeo-Christian heritage. If God is powerful enough to have His will manifested on earth by the majority of his believers, then maybe the “truth” should be found in the overwhelming majority of believers who went to war against Hitler, or who bless the police officers who guard them with deadly force every night.

And that great majority of believers have felt that God’s commandment is “Thou shalt not murder.”

Do you know the difference between murder and killing? If you do, maybe God does too.

Tie A Bowline Knot in Under 2 Seconds