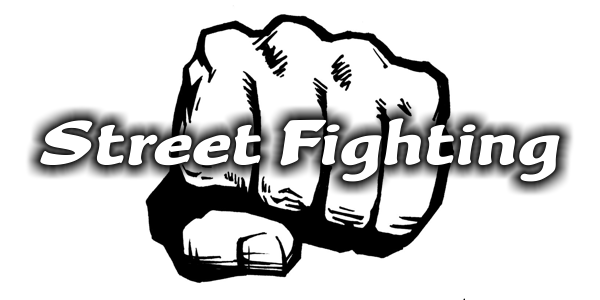 Most people think all martial arts training prepares you to be able to take on anyone in the real world. That kind of thinking can get you killed. Most martial arts schools do not train you for what Master Willie “The Bam” Johnson calls “street combat” but most call street fighting. There are significant differences in training for sport martial arts fighting and street combat. I’m not even going to go into dealing with weapons, although no one training for real self-defense should ignore that.

Master Bill D’Urso gave what I consider to be some sound advice, “We fight to hurt in the dojo and injure on the street.” His point was that you need to have practiced techniques in a way that you can deliver them with power in a real fight and be able to take a real hit. The difference being that, in the dojo, you don’t want everyone unable to continue.

I was asked why I was writing this article. It’s not because I have anything brilliantly original to say. I know many have espoused these same views, but these points need to be made again and again. I found I reached my fill of watching seminars giving bad advice and hearing black belts bragging about their abilities to defend themselves against any and all attackers. I know competitions can be rough I’ve had my ribs cracked and I’ve broken a guy’s leg but it’s still nothing like defending yourself on the street where the ability to think quickly and act wisely can be the difference between having an exciting story to tell and being another crime statistic.

Using martial arts for true self-defense involves more than just the physical combat you must be prepared for the psychological, legal, and ethical consequences. It also requires the realization that no technique or even system is always the best choice. People who tell you otherwise are probably trying to sell you something. I’ve found that the more I learn, the more I find I don’t know.

Let’s be real there are a lot of people out there giving bad information about self-defense. For example, I’ve been to seminars where the instructor had people spinning around to take away guns from attackers that were several steps behind them. I showed them a little experiment. I was the attacker and I kept saying “bang” from the time they started their move until they reached the gun. Suffice it to say that they’d have had a number of bullet holes in them (and I wasn’t using a rapid-fire weapon). The problem with bad instructors is that the students, not the instructor, pay the price for trying a bad technique on the street.

As I said earlier, more than physical fighting is involved on the street. If you’re involved in a public fight there’s a good chance the police will be involved and that means dealing with the legal issues. That doesn’t mean you shouldn’t defend yourself for fear of arrest and/or litigation I’d rather be alive to deal with those issues than dead on the ground. As the old saying goes, “I’d rather be tried by 12 than carried by 6.

The ethics issues include many things. Foremost of these is that all your life you’ve probably been taught not to hurt someone. This is intertwined with the psychological effects of having been in a real fight. Even if you don’t get hurt in the fight, the realization that you could have been hurt will have an impact. So will the fact that you may have seriously hurt someone. Even if you believe they deserved it, it can be difficult to deal with the realization of what happened (and what might have happened).

There are many things that can deter a sport martial artist from being his best in a street combat situation. They are part of competitive training that, without necessarily realizing it, creates artificial limits. Don’t get me wrong, I’ve always loved competition. Nor do I have anything against the health benefits of martial arts or the practice of discipline they teach. I just believe that when one trains for fighting it should be for real world situations. If you want to compete, you can scale back your techniques for the sport competitions. That’s far easier, and less dangerous, than trying to ramp up your sport techniques for a street fight.

I believe the three most important things for a traditional or sport competitive martial artist to realize in a real world fight are that there really are no rules on the street, that people who haven’t studied martial arts can be dangerous (perhaps more dangerous than those who have studied), and that it’s quite likely a fight will involve more than one attacker. I’ll talk a bit about each of those issues.

The first and biggest difference in training is truly understanding that there are no rules on the street. Every sport martial art has rules and limits on what techniques you can use or targets you can hit. The more limits your sport has on force, targets, and techniques; the harder the transition from sport to street is. I’ve seen national and world champions from all over the world make a crucial mistake that can get you seriously hurt on the street they pivot and turn their back to their opponent. That’s because in the ring most sets of rules prevent hitting from behind (the back of the head is nearly always an illegal target), but on the street that makes you a prime target. In the real world the only time you should turn your back is because you’re making a run for it (it’s important to realize that this is frequently the correct move).

If you’re used to fighting under a given set of rules, these rules become ingrained in your training. You may well stop practicing or defending certain techniques because “they’re not allowed”. I’ve known of two male martial artists who, when their traditional training failed them on the street, successfully employed the culturally frowned upon and “unmanly” technique of biting.

A related thing to remember is that, unlike in most sport martial arts, there are no weight or skill level divisions on the street. In one of the few ways that street combat is like most sports, in a contest between equally skilled competitors of different size bet on the big guy. I’ve seen size overcome skill many times.

Some self defense experts will tell you, not without merit, that there are rules on the street. However, these have nothing to do with allowable techniques and targets, but are concerned with things like keeping you out of jail or the morgue. The law limits how much force you can use in response to an attack it depends on the threat you’re facing. It’s true that survival should be your #1 concern, but you can’t ignore the legal consequences or the likelihood of revenge.

The second dangerous assumption is that “untrained” fighters aren’t a threat.

Underestimating your opponent is always a bad idea. In the ring it can cost you a fight, but on the street it could cost you your life. If you make this mistake, you may not get a chance to recover from it. As a competitor I frequently benefitted from people making this error and, in my distant youth, I took advantage of being underestimated in some real life altercations.

Even assuming you haven’t made the mistake of fighting only against your own particular style, there are still two problems related to the traditional training method of only fighting trained martial artists. First, trained fighters fight differently. They tend to be cautious because they’re aware of the damage their opponent can do. They probably are also operating under a set of rules (see previous section). An angry construction worker or gangbanger, however, is likely to just charge you or attack you from behind. He doesn’t care if you’re ready (he hopes you’re not) and doesn’t know that a bull rush is not a “proper” technique or that hitting from behind “isn’t allowed”. These unexpected strategies can overwhelm an unprepared martial artist.

People fairly new to martial arts, including black belts, usually think their training gives them an advantage over “untrained” opponents. It’s true they have the advantage over the average person, but that’s not the person likely to attack you. If your opponent didn’t think, rightly or wrongly, that he had an edge on you, he probably wouldn’t be in your face. And don’t assume your attacker will always be male plenty of fights have been started by women. In this case, especially if you’re male, your cultural upbringing could cause a major problem for you.

People who are used to using violence to get what they want are also used to getting hit. They will not crumble when you hit them (unlike too many martial artists). They are probably in good physical condition. They’re not likely to be rocket scientists so they probably hold down a physically demanding job, or have no job at all, and have plenty of time to lift weights or play basketball or practice beating up people. If you hold back on your techniques because of your training for competition, the bad guy will be mopping the floor with your face. Pain is no stranger to these people and if they’re drunk or on drugs, pain may not be a deterrent at all.

Most martial artists and sport fighting competitors approach combat as if it were a duel–me versus you, man against man, ready when you are, etc. That’s okay in the ring, but on the street it’s not like that. My personal experience, and those of people I consider knowledgeable about these things, is that most real fights are several people ganging up on one person or a bigger group targeting a smaller group.

Most martial arts training prepares you for one on one fights, if it prepares you to fight at all. Many people claim to train against multiple opponents, but usually they’ve trained to successively fight a series of individual opponents. This is not anything like fighting multiple opponents. In action movies you’ll see the hero fight multiple opponents, but you’ll notice that they typically attack one at a time. That’s not how it really goes down. Truly fighting multiple opponents, especially when they attack simultaneously from widely different angles (like your front and your back), is very difficult. If you’ve tried it, you’ve probably found it a very humbling experience (but an excellent learning tool). In fact, the best strategy against multiple attackers is usually to run. Looking for a weapon is also strongly recommended.

I hope I’ve made it clear what the differences in training are. I’d be remiss if I didn’t state that some things are the same regardless of why you’re training, conditioning and certain skill drills are useful to both groups. The bottom line is that you need to know and understand what you’re training for. Unfortunately, many top-flight competitors forget (or don’t realize) the difference between ring and street fighting and some have even been killed on the streets. Remember that no training makes you bulletproof. The best self-defense technique is to avoid dangerous situations.