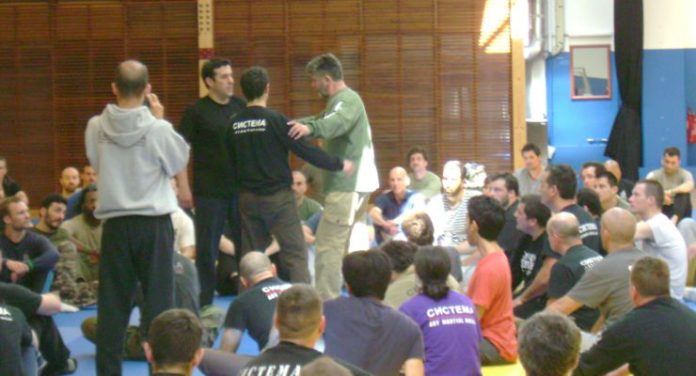 Paris in the Spring- an inviting and inspirational place to train! It turned out to be the perfect place for Vladimir Vasilievs Seminar “Fighting on the Move” seminar, hosted by Systema France. The seminar’s title caused me to think about Napoleon’s invasion of Russia and the defending, army’s strategy and tactics. The Russians continually retreated from Napoleon’s Grande Armee, thereby,creating a perilous situation for the Corsican dictator’s forces. As the French Army pushed further into enemy territory, they found the Russians were burning the land behind them, leaving no food or supplies to be taken. Napoleon’s men also found themselves being attacked and captured by Cossacks and other Russian tribes. This, I thought, was fighting on the move in a very clever form. Vladimir’s teaching was also very clever.

At Vladimir Vasilievs seminar he demonstrated and taught the advantages of maintaining mobility and the use of strikes to change the opponent’s attitude. We learned that it is possible to hit an opponent with the intention of helping him to lose his aggression and desire to fight. In training on this point, we explored our own feelings and responses to aggression. He then went deeper, instructing on the fine points of perception and tension, making the students aware of how the shapes they see and the movements they perceive affect their level of tension and attitude. These explorations led to the next phase, which was practicing continuous fluid movement while under the pressure of attack. Utilizing this movement allows the defender to redirect and even gain strength from the attacker’s power. This is where the magic of the weekend began to unfold, for it was clear at this point that Systema holds forth teachings of ancient knowledge and wisdom. Systema teaches lessons about human nature, lessons developed over centuries of training and combat. 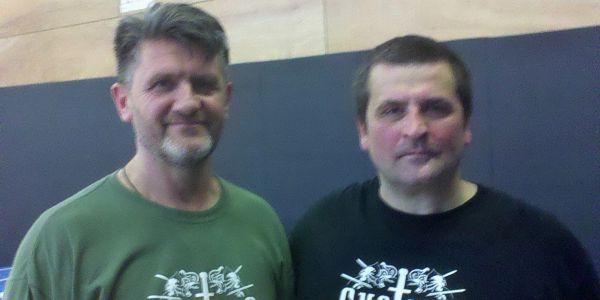 Following the second day of instruction, a couple of us were discussing what we had learned. I commented about the central theme of training one’s movement to respond to shape, rather than to a specific attack. Looking around, I noticed the distinct difference in my feelings when looking at round objects as opposed to square objects. Round objects made me feel more comfortable and relaxed than did square ones. In fact, I found that cubes made me feel “blocked”. I did some research on this and found that it is a well studied topic in psychology, and the findings of the research are utilized in industrial art and design.

There are psycho-physical reactions to shapes occurring in the mind that have been in development since the dawn of humankind. Recognizing the various levels and subtle types of fear, anxiety and tension which occur during self-defense situations is a crucial step toward the deeper spiritual aspects of our martial arts practice. Understanding the way we react to the shape of an object or “empty” space is crucial to directing our training. From a practical perspective, consider that when an attacker postures in front of you, moves toward you, looks piercingly at you, or hits you, he is attempting to transfer tension and fear to you. Why should that be so? Because tension decreases mobility and increases rigidity, which makes you easier to hit and easier to break. 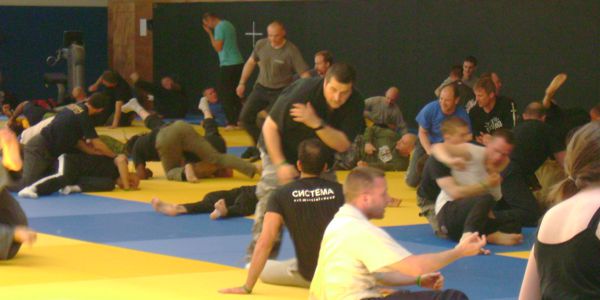 In Vladimir Vasilievs Seminar, Vladimir focused on exercises the develop awareness and the type of movement that keeps the body relaxed while executing a powerful attack. He had us practice moving toward, away and around each other, while remaining aware of the changes these movements engendered in our minds. This level of knowledge and practice flows from an art that imparts the wisdom of ages. It points the practitioner toward developing self-defense skills rooted in the very nature of a human being. It is self defense based on understanding and refining basic human reactions and abilities.

Through the practice of martial arts, one person can absorb the lessons of ten thousand people. We are always taught to be “aware of our surroundings” in martial arts training. This seminar provided a glimpse of the insight available to a trainee who decides to go as deeply as possible into such awareness, studying the feelings created by shape and movement. At the seminar we asked: do we feel anger, fear or tension when being attacked? If yes, and it was almost always yes to at least one of those feelings, we trained in methods of avoiding and even transforming these emotional reactions, creating fluid movement toward safe space. This is true martial arts training, going beyond physical technique. It is training of the mind and, through the breath, training of the spirit.

In your own training, please consider that living a happy and fulfilling life is the ultimate goal. Surviving attacks is just one aspect of martial arts practice. The true essence of martial arts is the development of a spirit that loves and enjoys life, an irrepressible self that won’t be defeated. This path is one where all the actions and events that make one feel safe, threatened, relaxed, or tense are studied, and the strongest will to win comes from loving life.

Vladimir Vasiliev and Systema – The Source of Strength and Peace