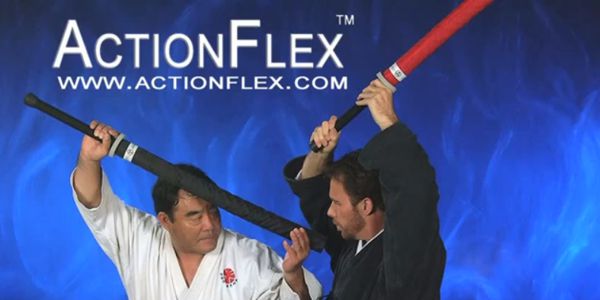 Dana Abbott discusses how warriors have been educated since the beginning of time and how training with padded combative weapons improve training.

I want to stress again that whether the material is steel, metal, wood, bamboo or the padded choken the techniques and philosophies are applied in the same manner.

Picture this, the head master grasps the student’s hand as if he were going to shake it in a greeting, but, in essence, he is starting the student’s training. He explains that this is how you grasp a weapon as he withdraws his hand from the student’s replacing it with a sword. The student has just now discovered how warriors have been educated since the beginning of time and this small learning process is an excellent start on their way to mastery of the sword.

Warfare and weaponry have changed dramatically. Previously warriors would fight to the death within an arms distance from the enemy. As man and his weaponry came into a new era, close quarter combat evolved into long distance fighting strategies that only require the push of a button or pull of a trigger. Hand to hand combat in this day and age is a considerably small percentage of overall fighting. Soldiers who represent close quarter combat are Special Forces units or commandos and are still considered the toughest and strongest fighting machines.

This also holds true with the martial arts world where over the years true fighting has morphed into pre-arranged forms (kata) that are executed at half or third speed. In that mode every martial artist can show perfection, but at a true speed with sword in hand they would fall by the way side. Instead of going in for the point, shot or kill most sparring has changed into a process of blocking and ways to block.

Many martial art instructors are reverting back to the “Old School” utilizing theories of training from a simpler time. Instead of discussing all the possibilities about fighting, the instructor can jump right in and offer a no-nonsense training program. And “that is”, show the student how to manipulate and use the sword in the simplest and fastest manner.

This matter-of-fact process speedily instructs how to effectively use and fight with a sword. With sword in hand and the correct grasp fully understood, the student learns basic cutting and striking patterns in a relatively short amount of time.

Presently, the art of the sword and techniques have been watered down to protect students from the harsh consequences caused by a mishap during sword practice. Seasoned instructors from 200 years ago scoffed at practice swords made of bamboo, but, these are now accepted worldwide along with padded weaponry.

That is why we are now able to fight and spar recreating deadly swift strikes and blows of yesteryear combined with new-age technology. This technology allows you to go in for the point, shot or kill instead of stopping just short of the “would be” fatal target. You can now experience the rigors of combat as it was originally intended whether it was on the battlefield or in a tournament arena.

There is now a wide selection of new safe, padded combative weapons being used in tournaments, which incorporate all the cuts, strikes and techniques used in ancient times. Whether your weapon of choice is made of steel, wood, bamboo or is padded all the techniques and philosophies remain the same. In Japan combative weapons also known as Chanbara are being used in competition, which follows the old way of the samurai.

The long sword in Japanese is called a katana and is made out of steel. It is more commonly known to westerners as the infamous samurai sword. Average length of about 40 inches but it can also come in various lengths. This razor sharp instrument that could wield instant death molded and influenced their culture. The katana was designed, constructed and used for attack killing. That is what it was made for, offense and defense. It had no other practical use.

In battle, the katana was the samurai’s right arm. The katana was his first choice because he knew he would fight with confidence and assurance as his weapon could best several opponents at a time and at various distances. Chances were if you were cut by a katana you would not live long due to limited medical expertise in that era. The brutal force of the sword could generate speed and power which made it difficult to defend against. That is why the Japanese samurai practiced evasion techniques in order to avoid the strike simultaneously while counter attacking.

There are 8 basic cutting angles employed in most Japanese sword styles. In a fight only 3 to 4 are readily used. These are your horizontal, vertical and diagonal downward cuts. For example: A downward diagonal cut from approximately 1 to 7 o’clock is called a hirari keasgiri, which is a cut that follows the imaginary collar line of a monk’s robe. A migi kesagiri would be a cut from 11 to 5 o’clock. These two diagonal cuts offer the greatest advantages since they open up target areas to the head and shoulders with the inclusion of the arms and legs. Striking the extremities gives you more distance from your opponent and helps you keep out of their circle of influence which would invite a possible counter attack.

The average Japanese katana weighs approximately 1200 grams or two plus pounds. This weight is heavy enough to prohibit lighting fast multiple combinations as one might see in fencing. This weapon was designed to execute one strong cut that would drop the opponent and if needed, another thrust or cut before moving on to the next opponent.

I want to stress again that whether the material is steel, metal, wood, bamboo or the padded choken the techniques and philosophies are applied in the same manner.

Choken
This 40-inch padded training tool represents the Japanese samurai sword. The choken allows combatants to fight, spar and execute technique at full speed and power. The choken can be expertly maneuvered at various distances inside and out of your circle of influence. This combative sword is by far the combatant’s sword of preference. It is designed from the world-famous Japanese samurai sword coupled with advances in science and technology. Without the danger of injury the student or combatant can attack the 5 main target areas of the body. In competition most points are won from diagonal downward strikes to the mentioned target areas. The choken consists of 28 inches of striking area and 12 inches of handle. Using the choken the combatant is offered a realistic fight in the Ultimate Physical Game of Chess.

Scoring Points
The target areas of the body are head, torso, legs and arms. Slashing, thrusting and cutting techniques receive points. All completed mein, kote, do, ashi and tsuki strikes are legal. The strike must be clean and swift, not allowing the opponent to make a counterattack.

Kodachi
This 24-inch padded training tool represents the one-handed Japanese wakizashi. The kodachi can be expertly maneuvered at all short and medium range distances. Mostly held in the right hand this sword is excellent for younger combatants and allows them a way to spar and execute technique at full speed.

The kodachi is the most forgiving weapon for beginning and intermediate combatants who wish to spar and match wits. From the beginner to the master, this two-foot short sword offers the tournament participant speed and agility. The length of the blade also offers a strong defense as well as a good offense. This reliable medium-range, one-handed sword offers 18 inches of striking area with 6 inches of handle.
Scoring Points

The target areas of the body are head, torso, legs and arms. Slashing, thrusting and cutting techniques receive points. All completed mein, kote, do, ashi and tsuki strikes are legal. The strike must be clean and swift, not allowing the opponent to make a counterattack

Now, today’s extreme and traditional martial artist can meet to spar on a single playing field where they are able to match wits and skills. In reading this I am sure you are reminded of the adage “The more things change the more they remain the same” and this could not be any truer than in the martial arts world.