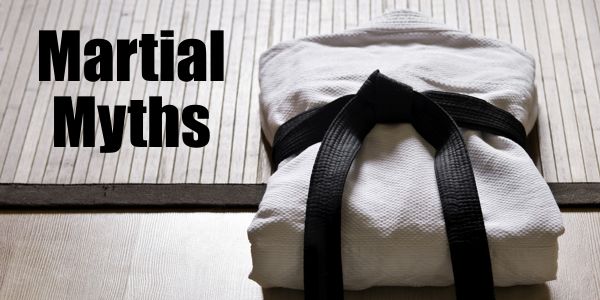 The martial arts myths that really irritate me the most revolve around fighting and self-defense, and students regularly ask me about these. I’ve listed 10 of the more prominent myths in this article. Believe it or not, a great majority of people still believe these to be indisputable facts.

Myth #1
The one-punch kill!
This is numero uno, the biggest myth of all; I can’t believe so many people still fall for this one. Most healthy people on this planet are extremely resilient and very hard to kill with empty hands. There are however instances where a person may have a personal weakness that can lead to extreme injury or death. Case-in-point, an incident that happened in New York years ago. A few guys riding in an open jeep were trying to make a right turn. A pedestrian was moving too slowly for their taste and a shouting match ensued. Next, a passenger hopped out of the Jeep and reverse punched this guy in the chest. He immediately collapsed and died on the spot! The newspapers issued a statement “karate man kills pedestrian with one punch!”

It was later discovered during the autopsy, that the victim had a particular heart condition that would have killed him if he had fallen down a flight of stairs the wrong way — no one-hit-kill, just a person predisposed to a particular tragic condition. Even karate legend, Egami in his book several years ago, admits there is no such thing as a one-strike-kill, he even went further and stated karate punches were the least powerful among all the types of punching styles he reviewed. The one-punch kill is undoubtedly a myth that was propagated to instill fear and misinformation, too bad many intelligent people still believe it.

Myth #2
Every professional boxer’s hands are registered with the police; therefore most people have little to fear if an altercation is about to ensue in public.

Wrong! A boxer’s just has to obtain a license in order to fight in the ring. In most cases the promoter will help him attain it. Boxer’s do not register themselves with any authority whatsoever. Having a license has no bearing on whether or not he will punch your lights out if he chooses to do so. He may in fact be the first one to deck you. Remember Tyson and Green?

Myth #3
Version 2 of the above myth: My martial artist instructor has such dangerous hands that he had to register them with the police.

If I had a dollar every time I heard this myth I would be living in a multi-million dollar condo on 5th Ave. There is NO SUCH THING. The typical story goes, “my instructor is so deadly that he had to register his hands with the local police.” It never happened and doesn’t exist. If someone tells you this story ask to see the documentation – there will be NONE!

Myth #4
My master’s hands are so tough and so well conditioned, he can break any inanimate objects at will, and feels no pain.

Conditioning limbs and body parts to break inanimate objects are as old as man. It does take skill and time to become conditioned, but it has nothing to do with martial arts and more to do with circus performing. The ability to break huge slabs of ice, bricks and boards doesn’t necessarily mean you can fight. I knew a bricklayer who would break stacks of bricks with a moderate slap. He never studied martial arts in his life.

Actually if you closely observe breaking contests you’ll notice that there’s more ingenuity used than power or martial skill. In most cases boards, stones, bricks and tiles are carefully spaced, this creates a domino effect to help break the entire stack. Training to break inanimate objects is also not healthy, it can injure bones, muscles, tendons and ligaments. One of the more famous breaking acts was Mas Oyama’s breaking off of bull’s horns, which wasn’t as noble as you may have heard. He procured sick bulls (tied up inside pens) and would attempt several strikes before the bull would go down. When he got older, he had so much pain in his hands due to arthritis that he could barely use them.

Myth #5
My master is impervious to pain [anywhere on his body] and no matter how hard I hit him, it has no effect.

Anyone can train to take full body shots to any part of the body with minimum effect; I’m not saying it’s easy; it’s a skill unto itself. This again has nothing to do with martial arts; this is more related to many documented turn-of-the-century circus tricks. If you observe these exhibitions carefully, you’ll notice that practitioners prepare themselves mentally for the strikes in a similar fashion that a yogi would prepare himself to walk on fire or lie on a bed of nails. What you never see though, are these same individuals summoning these super-protective powers during a real fight. Light a fire in your yard and invite a yogi to take a walk; you’ll be waiting a long time!

Myth # 6
My master has mystical or supernatural powers

Never happened, never will! These stories usually come from China and other parts of Asia and refer to the vibrating palm, the death touch, flying etc. Again, if you understand China, you’ll appreciate the cultural foundation is based on mysticism and not practicality.

I recently overheard a hilarious conversation in a New York Chinese martial arts shop. A customer and the shopkeeper were seriously discussing how to fly kung-fu style. They both were comparing notes and scoffed at the general public for being non-believers. These guys were serious! I almost exploded in laughter.

I have been to China many times and after coming across some very famous masters who weren’t very accomplished fighters, I finally met a (non-martial art) scholar who cleared up this myth. He told me, in the old days, if anyone died outside of the normal physical injuries [during a fight], it probably happened in two very distinct ways. #1. The person could have been predisposed to a certain injury, that is, he had a weak heart, an aneurysm or something similar, or #2. poison was used. In China, weapons as well as finger picks were used to transmit various poisons. A slight touch and the victim would die within a few days and the mysterious death touch would be credited.

Myth #7
I practice the real style, not the watered-down styles everyone else practices.

These statements started gaining popularity with the advent of the UFC. All of a sudden traditional martial arts were on the defensive, why, they were losing all the time. The only recourse was to say that everyone else was studying the watered down version, and that a real master didn’t fight in the ring, he only fought to the death. I noticed this trend specifically with wing chun, aikido and karate. I had a conversation with a wing chun practitioner last year. He informed me that his master’s master was better than Bruce Lee’s master’s master. Well if you recall, Bruce Lee created Jeet Kune Do because he had lost faith in wing chun as a fighting style? Many Karate practitioners use this line as well, “well my master was the true master, not the phony master, but he only teaches from his cave because he’s so deadly.”

Myth #8
Learning how to defend yourself from a dangerous situation takes years of training!

Absolutely not! Studying traditional martial arts for 10 or 20 years doesn’t necessarily mean you can fight. Being able to defend yourself from a violent street attack can take as little as a few weeks of intensive training. We’re not talking about developing cage fighting skills, merely defense and escape. I’ve seen great results with individuals who studied basic combatives for a week and maintained a serious and ongoing practice schedule. Most street fights are won more with awareness, a proper mindset and the will and determination to do whatever’s necessary.

Myth #9
The military and police all know how to fight!

Nothing could be farther from the truth. Reflecting on all the military and LE personnel I’ve taught, over the years, these guys can’t fight. Of course there are a few who have outstanding skills, but for the most part, they are the exception. The state sees soldiers and police as expendable. The military doesn’t have the time and resources to promote a long-term hand-to-hand program; soldiers and police use guns predominantly.

I saved this one for last. Although it’s not directly related to martial arts or self-defense, it is however an important contributing factor to a person’s mindset. And when it comes to fighting, we all know, mindset is 95% of the equation.

The phrases, “It was meant to be,” or, “it happened for a reason” is most commonly used when a tragedy occurs, and I can sympathize. However, many people have a difficult time accepting that things can happen randomly in the universe.

The mudslide that killed a relative wasn’t planned specifically to wipe out that person. The shark that killed a schoolgirl didn’t get its instructions from a higher power, things happen at random often, cause and effect.

Many individuals, both religious and non-religious use this statement to explain their own failure. For a secularist these statements make no sense since they don’t believe in any omniscient or omnipotent being controlling their lives. For fate to be in control is out of the question for them.

For religious individuals it doesn’t make any sense either, since all religions believe that individuals always have the choice over good and evil. If we indeed do have a choice, then the choices we make are up to us, not an outside force. The reason I dislike this statement so much is because it’s used as a crutch, to the point that a person gives up the chance of winning.

Keeping It Real! “The C.U.T.S. Method