It’s hard to believe an article on martial arts photography would start out, “In the “old days” there was film… a piece of celluloid covered with a light sensitive emulsion… “Wow, it’s hard to believe that those “old days” are not so old at all. It’s just that technology is advancing so rapidly many of us will actually experience many of the stages through which our lives will evolve, rather than just reading about it as a part of history.

For instance, in the field of photography we all know about film but very few people use it anymore. The labs I used to go to have closed for lack of business. Film is still used by some commercial perfectionists who fall into the category of “diehards”. 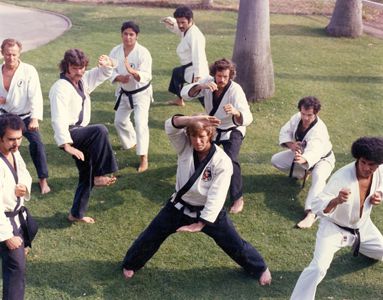 My grandfather and father were diehards. My grandfather didn’t have a booming business but he picked up a little extra income using a 5×7 view camera. His camera made images on a photo sensitive emulsion painted on glass plates and when celluloid film came out, his equipment was obsolete and so he quit photography.

My father went home to home taking baby pictures using a 4×5 Speed Graphic that used the celluloid film but when color photography came along he wouldn’t have it. Up until that time B&W photos were hand colored or “tinted”. When people asked if he was shooting in color, he’d say, “Oh no, I use that good ole’ reliable B&W.” Until the day he died he shot B&W and printed the pictures in his basement. He refused to make the change to color.

When it was my turn, I was using B&W and color film, in the Marine Corps, the Industrial Marketing of Polaroid, the Research & Development Division of Technicolor and in my own studio in Hollywood, and then I met Chuck Norris. And shortly after that, Digital Photography came along and I wouldn’t have it. I was tempted to quit. But, I saw what happened to unbending dinosaurs and so I went kicking and screaming into digital… and I’m glad I did.

Meeting Chuck Norris kept me centered and I resisted the urge to give up on new ways of doing photography. I had a dozen other vocations I could have followed but, because of Chuck, I became interested in photographing martial artists. So I decided to get into the digital and the computer age and mark a place of my own, photographing the world of Martial Arts.

Chuck Norris and I became workout partners and when he gave a demonstration I would go with him and help him with the demonstration, and then when he spoke I broke out the camera, and I took publicity shots. It worked out pretty good really. I wasn’t a black belt yet when I started working out with Chuck. Every morning during the week we worked out at his home in Rolling Hills or at the Torrance studio. I wanted so much to be a black belt because in that day, the late 60’s and early 70’s, there was always someone with a camera who would take black belts down to the beach or to the park and take some awesome photos. There was a day that a common understanding was blindly accepted, “I can’t wait until I make my black belt so I can have some cool shots taken of me.” I don’t know of anyone at that time who relished the idea of taking pictures of brown, red, green or white belts unless they were family.

I was anxious to get my black belt so I could be photographed by Rocky Gunn. His photo of me doing a flying side kick, with the ocean in the background, ended up on the cover of Official Karate magazine. I still felt it odd to have to wait until you make a black belt before having a professional photograph doing something you enjoy. Martial Arts is not just for black belts. And what a valuable memory it would be to have a record of your journey getting there.

I packed up my camera in Atlanta Georgia, went to Washington DC and lived with Jeff Smith for six weeks and photographed the students of the all the Jhoon Rhee Taekwondo schools. I wanted to see if red belts, green belts and white belts would want their photos taken enough to pay for it. I photographed all the schools for three weeks and then showed the proofs for three weeks. The first three people, who looked at their proofs of the photos smiled and said, “very nice” but didn’t buy them. They thanked me and got up and left and I thought… wow, what was I thinking? Why did I think this would work?

But, then came the fourth person and they bought a package, and then several people after that bought photos, too. I started smiling. I remembered how much I wanted to have a photographer make me look good when I was starting out in karate and I figured there were plenty of others who felt the same. I was right. And since then I’ve traveled to 38 states and Canada photographing 100,000 karate students over the past forty years. And now, I’m happy to say I have inched just a little closer to being able to stand with the first real “Martial Art Photographer” I ever knew, Rocky Gunn.

I started out with the notion of dealing with one single subject, “Martial Art Photography” but that was just the vehicle that took me into the schools and homes of the greatest pioneers of today’s Martial Artist world. I hope to share some stories of the wonderful Martial Artists I have had the good fortune to meet.

Papillion: A Caterpillar A Butterfly and the Fight To Be Free

Up to Bat: A Deliberate Purposeful Act