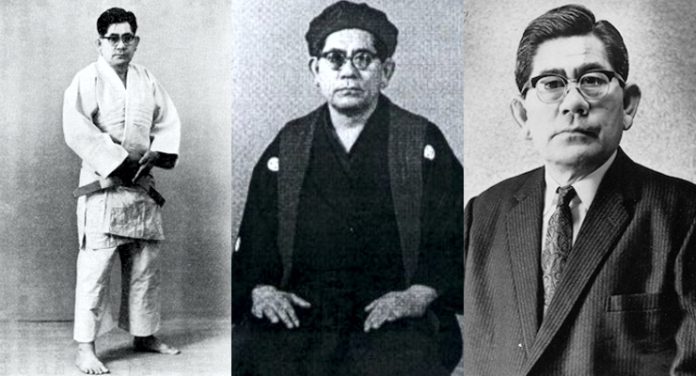 Masayoshi Kori Hisataka is the Founder of the Shorinjiryu Kenkokan Karate and the Kenkokan School of Karatedo. He was born in Shuri (Naha City in Okinawa) on April 22, 1907, and was a descendant of Seiwa, the 56th Emperor of Japan. Masayoshi Kori Hisataka studied Karate, Kobudo and Jiu Jutsu and exchanged knowledge with many of the Karate masters of the time including Master Anko Azato and Master Kanryo Higaonna and Master Ryosei Kuwae. He studied weapons with kobudo pioneer, Sanda Kanagusuku, who was the former Prefectural police superintendent and learned the Kudaka family art of weapons known as Shishiryu and the family art of Okinawa-te from his father (Seisei Kudaka, an uncle and his grandfather. Hisataka’s his main instructor was Okinawa Karate Master Chojun Kyamu.

Masayoshi Kori Hisataka entered the military and received training which included bayonet handling and thus furthered his knowledge of combat. In August 1930 he toured Taiwan with Chotoku Kyan and Ryosei Kuwae where they demonstrated karate at the Taipei Butokuden and participated in a number of challenge matches. When Hisataka returned to Japan he studied judo at the Kodokan with Sanpo Toku and achieved 4th dan within his first year of training. He also studied Kendo, which is the Japanese version of sword fencing, and competed at every Police Department competition.

During World War II, he was sent to Manchuria and assigned as a station master along the railway at Bakudashu, Sarachi, and Cho Kakko. Whenever he could he would practice Karatedo and Judo, and he studied Chinese martial arts with a master of Hakkyoku Kempo. After World War II he returned to Japan to find that the Japanese people were demoralized by the war so he placed a greater emphasis on the spiritual development of the individual through karatedo training. He founded the first Kenkokan Karate dojo in Oshima Park, Hamada village, in Kumamoto prefecture, Kyushu in 1945. He later relocated the dojo to Shimo-Kitagawa in Tokyo’s Setagaya Ward. In 1955, he opened his Shorinjiryu Kenkokan Karate headquarters in the Waseda area of Shinjuku Ward, Tokyo.

Masayoshi Kori Hisataka named this karatedo style based on the influences of Okinawan Karate (tode), Chinese Shorinji kempo, Ryukyu Kudaka jima Shishiryu bo jutsu, and Kudakaryu Karate jutsu along with Hakkyoku Ken and Shoalin Long Fist. Hisataka was also one of the first to experiment with the use of protective equipment called Bōgu, to provide safety in karate kumite. His philosophy was to “protect the targets, not the weapons”, meaning that protective equipment should cover the vital targets on the body, as opposed to wearing gloves and shin pads to cover the hands and feet. His son, Masayuki Hisataka has continued this approach, having gone on to create the Supersafe Anzen Bogu protective equipment used in the Koshiki Karate competition system.

Masayoshi Kori Hisataka also made some innovations to Karatedo training which included:

While he was actively teaching, Hisataka utilised the title Shinan, and many of his former students from that era, and their descendant students, continue to respect him with this title. At some point after his retirement from active teaching, the members of his Shorinjiryu Kenkokan organisation began using the honorific title of Kaiso.

Masayoshi Hisataka was also a close personal friend of Shinan Chojun Miyagi of The Goju-ryu School of Karatedo and was a training partner of Mochizuki Sensei, a highly ranked practitioner of Aikido and Judo who studied under the founders of both systems, notably Morihei Ueshiba (Aikido) and Jigoro Kano (Judo).