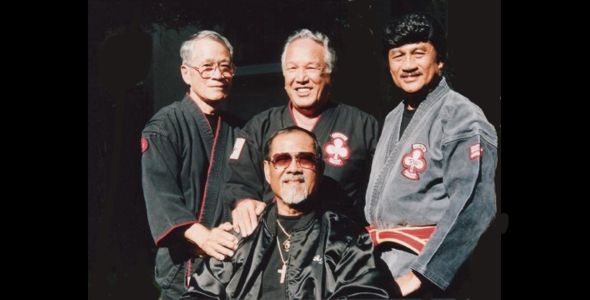 The martial art of Kajukenbo is an evolving, eclectic blend of various martial arts styles. The word Kajukenbo was derived from the initial letters of the styles that contributed to the creation of the art. Together they make up the Kajukenbo motto: Through this fist art, one gains long life and happiness.

KA (long life) – comes from the word Karate, an art form that places the emphasis on hard and powerful techniques. The Korean karate influence was from Korean martial arts that Peter Y.Y. Choo learned from his father.

KEN (fist) – comes from Kenpo, a form of karate that not only stresses the hard and powerful movements, but emphasizes multiple and fluid hand techniques. The kenpo influence was from Kosho Shorei Kenpo/Kara Ho Kenpo brought by Adriano Emperado.

BO (style) – comes from Chinese and American boxing. Chinese boxing means Kung Fu, which puts emphasis on flexibility and agility, parrying and evasive movements that flow together. The Chinese boxing influence was from the Sil-lum Pai style brought by George “Clarence” Chang. Later Sifu John Leoning would continue to contribute to the “Bo” of Kajukenbo by pointing out that there should be no wasted motion.

Kenpo emerged as the core of the art, but in the 1960’s Sijo Emperado continued to add more Kung Fu to the system. It became more fluid, with combinations of hard and soft techniques. This continues to incorporate and adapt new techniques that have been proven to be street-wise.

To test the effectiveness of their techniques the five founders would provoke fights with the gang members in and around Hawaii’s Kalihi District. If the techniques they used were consistent in helping them overcome their opponents in street-fighting, then that technique was kept as part of the system. From these fights came Kajukenbo’s Grab Arts, Punch Counters, Club Counters, Knife Counters, and Pinans (forms or katas: renamed “Palama Sets” in 1993).

Kajukenbo stresses the following-up of techniques based on the opponent’s reactions. The idea is to end the fight with the fewest techniques possible. It is important to know how an opponent will respond to attacks and how best to take advantage of his reactions.

Kajukenbo training is very physically intense. It is important to be in good physical condition; thus warm-ups, callisthenics, bag work, sparring and grappling are important. Kata is performed to fine-tune a person’s movements. Partnering is important because it teaches a student how to manipulate an opponent and how to follow up on the opponents reactions.

Kajukenbo came together in the Halawa Veterans Housing Area of Hawaii during the years 1947 through 1949. There were five different martial arts practitioners from different styles who came together to developed Kajukenbo. They develop one system that would complement each of their individual styles and it had to allow for effective fighting at all ranges and speeds.

According to Frank Ordonez, he helped lay the foundation for the creation of the style. He met Joe Mitsuno Holck while training in jujitsu with Sam Luke, Sr.. After Pearl Harbor, Frank Ordonez joined the service and was on the Army boxing team at Ft. Shafter in Honolulu with Peter Choo, training under Thomas Toyama. Frank invited Peter Choo to cross train with him and Joe Holck in Jujitsu and with Thomas Young in Kenpo.

In 1947, while living in Halawa Housing, Frank invited his child hood friend and God Brother Adriano Emperado, a student of Kenpo Professor William K.S. Chow, to come train with Joe Holck and Peter Choo in the abandoned Barracks barracks next to his home. Peter Choo invited his friend George Chang, a kung fu practitioner, to come and train as well. The 5 Kajukenbo Founders called themselves the Black Belt Society. They continued to train and develop Kajukenbo until 1949.

At the beginning of the Korean War, Joe Holck, Peter Choo, and George Chang were called away to serve their country.   Adriano Emperado was designated to carry on the system.  Emperado and his brother Joe introduced Kajukenbo to the public by opening the Palama Settlement School in 1950. They called the school the Kajukenbo Self Defense Institute (K.S.D.I.).   After Frank Ordonez was honorably discharged from the service, he started a career with the FAA. and was able to teach at the Palama and Wahiawa Branch schools along with Joe Emperado. The art slowly grew in popularity, and soon Emperado had 12 Kajukenboschools in Hawaii.

Since the goal of Kajukenbo is to be victorious in a street fight, the training in at the Palama Settlement School simulated the streets and was brutal. The student practiced full contact fighting because a student afraid of pain would be defeated in a fight before the fight began. Emperado had a motto, The workout isnt over until I see blood on the floor. Those who survived this kind of training became exceptional fighters, known to fight with little provocation. Some of the students that came out of this school were Sid Asuncion, Aleju Reyes, Joe Halbuna, Charles Gaylord, and Tony Ramos.

In the 1960s Joe Holck became chief instructor at the Kodenkan of Tucson, in Arizona, which continues now with his son Vinson Holck; and as part of the curriculum, Kajukenbo is still taught.

Since 1966, three styles branched off of the Original Method of Kajukenbo. The Chuan Fa branch in 1966, Wun Hop Kuen Do branch in 1968, and Tum Pai branch in 1974. Additionally, various methods have evolved over the years, for example, the “Ramos Method” and “Gaylord Method”.

In 2008 Frank Ordonez became chief advisor of the Ordonez Kajukenbo Ohana, with even further development of the Kajukenbo Jujitsu component.

In the late 1950s, Frank Ordonez wrote the Kajukenbo prayer that is recited at the beginning and at the end of many Kajukenbo classes. The Prayer shows Kajukenbos beginnings as a Christian and an American based martial art. Not all Kajukenbo schools utilize the prayer or the philosophy that goes with it.

Almighty and Eternal God, Protector of all who put their trust in thee, Accept the humble homage of our faith and love in thee, The one true God. Bless our efforts to preserve the integrity of our United States, A nation founded on Christian principles. Enlighten our rules, Guide our lawmakers, Protect the sanctity of our homes. And bless our efforts in these exercises, Whose sole purpose is developing our bodies, To keep others mindful of thy commandments. Give us perseverance in our actions, That we may use this as a means to keep closer to you, The one true God; In the name of thy beloved son, Jesus Christ Our Lord, Amen.