“Without honor there is no art, only pretenders in a brawl”
Mangisursuro Michael G. Inay 1944-2000

Mangisursuro Mike Inay was a Master instructor in the Filipino Martial Arts. He traveled throughout the United States and Europe teaching martial artists and law enforcement personnel. He also trained U.S. government security personnel. Suro Inay’s program has also been taped for use on L.E.T.N., a national television network. 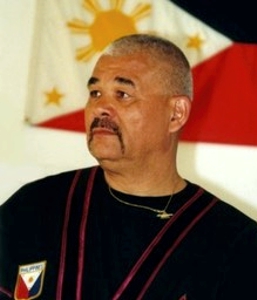 Mike Inay studied privately under the tutelage of two great Eskrima masters, Max Sarmiento and Angel Cabales. Mike Inay proposed to Angel Cabales the idea of forming an organization to preserve and promote the Cabales Serrada style of Eskrima. It was this and many other contributions that made Mangisursuro Mike Inay a prominent figure in Stockton, California Eskrima. With Mr. Inay’s help, Mr. Cabales formed the first Cabales Serrada association. Mike Inay also developed a ranking structure for the Cabales system.

Mike Inay worked hard on developing and refining the Inayan System of Eskrima. Inayan Eskrima comprises seven distinct styles of Eskrima. Each of these styles has a complete set of basic, intermediate, and advanced techniques and concepts that make them viable and independent of one other.

Mike Inay developed a learning structure for these styles and a ranking system for grading. He elected to call all of the styles he teaches Inayan to avoid confusion with other teachers and styles that might have the same or similar names. This also reduced the controversy and claims of validity others could or could not profess with regard to Inayan Eskrima.

Mike Inay developed several courses dealing with pressure-sensitive nerve areas, riot baton, and advanced knife training. He also developed the use of the knife as an alternative weapon for executive protection in instances where a firearm is not warranted or safe to use.

Mike Inay passed away on September 27, 2000 teaching the Inayan Eskrima he loved. As head of the system he was referred to by his unofficial title Suro; since his death he is referred to as Mangisursuro, his official title.

Since his death, Mangisursuro Mike Inay’s teachings continue through his most senior students from around the world, those he promoted to Instructor rank.