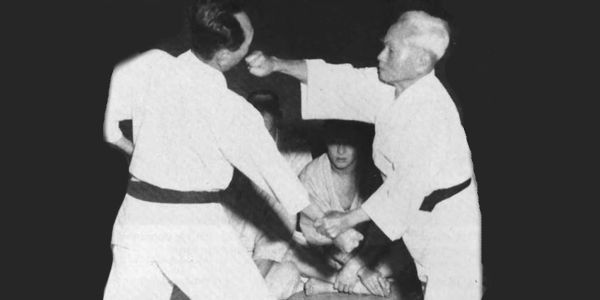 Pressure Points in Shotokan Karate from Shotokan Karate Magazine, July, 2004 – There is a well known photo of Gichin Funakoshi in his 80’s performing kumite. In the photo, Funakoshi has grabbed the right wrist of the attacker with his left hand,and is delivering a right upper level reverse punch (jodan gyaku-zuki) using a middle-knuckle fist (nakadaka-ken). Some Shotokan practitioners look at that photo and observe,“How spry and healthy he was Shotokan karate is clearly an excellent health regimen.” Other practitioners (notably those whose lineage trace more to the Shoto-kai) react with, “See, O-sensei was using a middle-knuckle fist. That proves that we should be doing the same.”Practitioners with an intimate knowledge of the use of pressure points (jintai no kyusho), however, draw the following conclusion, “Gichin Funakoshi understood and used pressure point fighting methods (kyusho-jitsu).”

Of course O-sensei knew pressure points! After all, Karate-do Kyohan has an extensive chapter devoted solely to the subject. But, the existence of this chapter alone does not demonstrate a genuine understanding of pressure point fighting. If that were the case, then every Shotokan practitioner with a copy of Karate-do Kyohan would be a competent pressure point expert. What makes the difference between the true expert and someone who merely owns the book, is what is not said in the chapter on vital points.

In the old photo, Funakoshi has grabbed in such away that his left thumb is pressing on a point on the inside of the attacker’s wrist. The point is known as Heart # 5 (Tongli). The punch with the right middle-knuckle fist is aimed precisely to the hollow of the cheek, at a point called Small Intestine #18 (Quanliao). This is not accidental. The Heart and Small Intestine meridians are considered a yin/yang pair in acupuncture anatomy. To attack both simultaneously is regarded as a way to short circuit the positive and negative lines of the body. Furthermore, that particular wrist point is a “connecting point” between the Heart meridian and the Small Intestine meridian, and a point from which ki is understood to rise up to the eye. The cheek point is the location on the Small Intestine meridian which is closest to the eye. So, as the energy entered into the wrist point rises to the eye, it is met at the cheek point by the punch.

Redundancy: The Secret to Idiot-Proofing Your Martial Art

Chris Thomas - June 1, 2013
We use cookies to ensure that we give you the best experience on our website. If you continue to use this site we will assume that you are happy with it.OkRead more