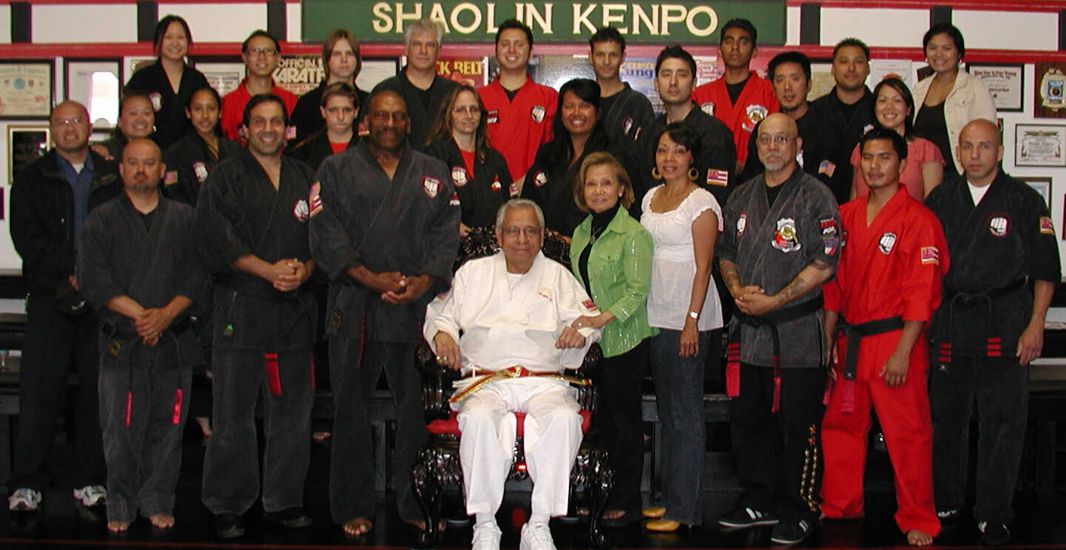 Ralph Castro approaches, his black hair generously flecked with well-earned gray. Flashing an infectious smile, he possesses a calm, friendly, sincere manner tinged with a playfulness that belies his 68 years. He begins greeting the 150-plus kenpo dignitaries who have gathered to witness the “passing of the baton” to his eldest son, Rob Castro.

The younger Rob Castro will gradually, under his father’s watchful eye, take over the day-to-day running of the International Shaolin Kenpo Association, giving Ralph more time to enjoy the twilight of his life.

Not that the elder Castro is slowing down. Not by long shot. Don’t even mention the word retirement because that word doesn’t exist in his vocabulary.

“I have been giving thoughts to doing a biography on the Shaolin Kenpo system,” Ralph admits. “We have been doing a lot of seminars as well having been approached to do videos on the system, but I am holding back right now while trying to find the right angles from which to approach it.”

Make Way For The Ceremony

On this night, however, talk about books and videos make way for the ceremony of handing down the grandmastership from father to son. It is a ceremony that serves numerous purposes. First, it signals a style’s natural family progression. Secondly, it announces to all that should something happen to Ralph, the successor’s name has been etched in stone. This is a sad sign of the times. On at least two occasions, grandmasters in full control of the organizations have unexpectedly died. What followed can be likened to a piranha feeding frenzy as senior students scratched and clawed for pieces of the organization.

Castro wanted to ensure these battles would be non-existent within the Shaolin Kenpo system. “In the early years I already had the planning stage set for myself, because of my dear friends that had passed away and the chaos that ensued. I learned from that,” Ralph explains. “I said I am not going to let that happen to me. I am going to do it now because I would like to make sure things run right.

“The kenpo people, they know who Rob is,” added the elder Castro. “He has competed in the (Ed Parker’s Long Beach) Internationals and has taken firsts in sparring. He already has a reputation set. I have said that you support Grandmaster Rob or you move on.”

Building A Foundation
Pausing, Ralph Castro reflected on the years working with his son.

“When you mold your own child from the beginning, you are with him every day and every night. You have a closer bond and relationship with your own, so you feel secure that this is going to be your chosen.

“Yes, you may adopt a student and make him, say the leader of the clan. Or a top student, yes, if you have no one. But if you have a child that you have trained from the start, he has maintained the respect of the system, in other people and in himself, I think you are on your right way. I can say that, for my part as a teacher, father —and I’ve got to say, friend — I thought the choice I made was done through the guidance of the Lord.

“There are many times I have made mistakes. The system…there’s good, there’s bad and there’s ugly. And the ugliness is when you make a bad mistake. I thank the Lord for his guidance, his precious gift to me, the blessings he has bestowed on my family and for my son.”

With the induction ceremony for, and the performance by, Grandmaster Rob Castro, a new era begins for the Castro family and the Shaolin Kenpo system. But as one sees the future, one also cannot help but look back to see how far Shaolin Kenpo has come.

Originally from Honolulu, Hi., Ralph Castro was 21 when he began training with professor William Chow, considered the modern-day founder of the kenpo system.

“I had a chance one weekend to meet the professor and I went to his school,” Castro remembers. “When the professor walked in, everyone else knew who he was but me. I looked at this man. He had calluses on knuckles. I thought ‘Wow’. I didn’t say anything but I knew I had to see this man work out. In those days the school wasn’t open to the public and my brother-in-law said that he didn’t think I could watch. He was kneeling down on the floor conducting classes, and I was unfamiliar with the traditional part of how it was all done. I just walked in like a local boy, putting my arm around him and then looking at these guys working out and saying to myself, ‘What the heck are they doing?’

“Professor stood up and said, ‘Stop.’ He looked at me and said, ‘I’m going to throw a punch. He did it so fast. That was when I backed up, being very humble.

The Years With Chow
So began the years of study under professor Chow.

“In my training with the professor I would train seven days a week and if there were eight days I would train eight days,” he recalled. “Something my wife wasn’t very happy about. But we worked it out. In fact, after I came to the Mainland, I felt miserable at not being able to train. My wife is the one who encouraged me to go out and train with a friend. I ended up working as a manager at a gas station but I wasn’t content. She knew that I always thought about karate so she told me one evening, ‘You ever thought about opening up your own school? Yeah, I mean you’re not making good money and maybe the karate will help you. We’ll take a chance on it’, and I did. That is how I got started in 1958.

“Of course, my good friend Ed Parker helped me start up the business side of it. Shaolin Kenpo wasn’t Shaolin Kenpo back then but my style was different from his and he liked that. He gave me my black belt because at that time I didn’t know if I would ever see professor again. But when I did see him again in the 1970s, he gave me my grandmastership. In 1981, during a visit to professor Chow in Hawaii, I officially began Shaolin Kenpo, under his approval. Although I had been teaching Shaolin Kenpo for a while, it was now sanctioned by the professor.”

Since coming to the Mainland in 1958 and settling in Daly City, California, Ralph Castro has slowly built Shaolin Kenpo, away from the public eye.

“For years we never really shared our system, wanting to keep it to ourselves,” he noted. “But now we realize that we want others to share it, to help it continue to flourish so we started opening up more by doing more seminars. We opened the gate with a tour in Spain back in 1995. Since then we have been approached constantly to share our system.”

The Magnificent 7
With 21 schools worldwide, including in Spain, El Salvador, California and Hawaii, the system has begun to flourish. All seven of Ralph’s children — April, May, Rob, Ralph “Boss” Castro III, June Castro, July and Mia — are involved in the martial arts, making the Castros a true “martial arts family”.

At one time, in the 1970s they were called “The Magnificent Seven”.

“We were the first family, in the early years, to choreograph the forms to music,” Ralph admits with pride. “We were the family that used music for our demos long before it became the popular thing that it is now.”

Adds Rob, “When we started competing there were no weight classes, no divisions of kata and forms. There was just age and male/female. Nowadays music is a part of competition.

Although Rob admits being the son of a grandmaster comes with its own unique demands, the overall experience has been positive.

“It was karate, eat, sleep, karate,” he maintains. “Because the school was my father’s way of making a living, we were all involved in it after school. Our average day was wake up, go to school, after school go to the studio where we worked out. As we got older we got more involved in the classes and into teaching so there were no extracurricular activities. This went on all throughout high school.

“In a way I felt I was robbed in the sense that I missed out being able to be on the football team and such but through the years I am actually glad that my dad did do that because it helped me, for one thing, to focus more on myself and it has been good on my children. As a kid, I had a lot of temptations but the martial arts gave me a reason for not following those temptations. I took the straight path and it has taken me to where I am now.”

Rob also said there are other positive aspects with being involved in the martial arts at such as young age.

“As a young boy, I remember family friend, Bruce Lee, teaching me a form at our school,” he explained. “I forgot it long ago but to have spent time with a man who is credited by many for opening martial arts up to the world and who was so knowledgeable was a thrill. Also as an older teen, I got to spend time with professor Chow.”

Rob recalled an incident during a visit, which left a lasting, if not painful, impression.
“I went with a friend to Hawaii and got to visit with professor Chow,” he recalled. “At his house I noticed a hanging bag and I went up to it. I mean it was a canvas-type bag, not very big, maybe half the size of a regular kicking-type bag. You know, normally when you see a bag you maybe give it a little tap, one or two. Well, his bag was as solid as concrete. I hit it, not realizing what was in it. Nowadays, I always make sure to lightly tap someone else’s bag before really hitting it.”

Throughout his martial arts life, Ralph Castro has guided Shaolin Kenpo through a strict set of fundamental principles.

“Everything we do in life can be done correctly or incorrectly, but if the guidance and wisdom is there then that person will have a strong foundation,” he insisted. “If every child knew the foundation of what martial arts has, the respect, then everything would be fine. There would be no more fighting. I want people to understand that Shaolin Kenpo is designed for everyone. For understanding, confidence, security, peace and comfort.”

By Jeanne Capps
Reprinted from Inside Kung-Fu Magazine, April 2000

For more information about Ralph Castro’s International Shaolin Kenpo Association visit their listing on the Martial Arts Schools and Businesses Directory by clicking on the image on the left.

For more information about Ralph Castro’s Shaolin Kenpo Martial Arts visit their listing on the Martial Arts Schools and Businesses Directory by clicking on the image on the left.