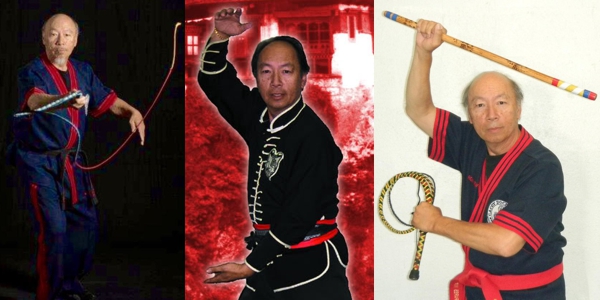 In 1960, Sifu Eng became one the Chief Instructors of the Fu Jow Pai Kung-Fu Federation after Master Toy’s passing. Sifu Wai Hung was the other chosen Chief Instructor in New York. Sifu Eng moved to Sunnyvale, California in late 1960.

Ron Lew’s first meeting with Sifu Eng was in 1963. He and his good friend Dennis Futamase were looking for a Kung-fu master in San Jose, California. However, most Kung-fu masters were located in San Francisco. In those days, Kung-fu was only taught strictly to Chinese. For several months, he and his friend ate at this old Chinese Restaurant trying to get to know a specific waiter. They had a hunch that this waiter knew Kung-fu; by the way he walked and how effortlessly he set up the tables. After getting to know this waiter fairly well, he confessed that he knew some Kung-fu and had started at the age of 6. And that was the beginning of a long and wonderful martial art journey. They were his first students in the California and paying $5 per month.

In the 1966, he met Sifu Al Dacascos and one of his top students, Ted Sotelo. That meeting is another unfolding journey, which has led to lasting and bonding friendships. Sifu Al Dacascos would later be introduced to Paul Eng and Wong Jack Man.

In 1981, Sifu Lew met Master Peng-si Yu and his wife, Min Ouyang from Shanghai. He also met Master Hu from Tibet. For over 20 years, Sifu Lew was heavily into the external Kung-fu. He furthered his studies in the internal arts: the “calming the Mind and Healing art” through Qi Gong, long hours of Standing Meditation, Breath work and Tibetan Energy understanding.

In 1985, TiAiKi – Tibetan Martial Arts & Healing was founded and officially added to Tiger Eye Claw System. This was established in honor of Master Hu, Tibet.

In 1993, Professor Lew started creatively exploring the Bull Whip with the guidance of Master Tom Meadows, Latigo y Daga (Whip and Dagger). Professor Lew’s distinctive Bull Whip style is called: the “Tibetan Wave”. He has been bestowed the honor of being one of five elite certified instructors. He has found the Whip is a very dangerous weapon; as well as to the user- holding the other end. While vacationing in Maui – Hawaii, Professor Lew visited an old bookstore. He asked the pretty young lady attending the store: “Excuse me, do you have any book about Whips?” “Sir, we not ‘that kind’ store. Go check down the street.”

Professor Lew has often said, “You can learn a great deal about yourself when teaching your students everything – they, in return, will teach you the real Art of martial arts.”

USAdojo - March 15, 2008
We use cookies to ensure that we give you the best experience on our website. If you continue to use this site we will assume that you are happy with it.OkRead more