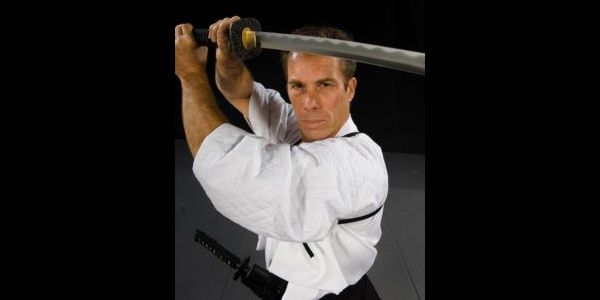 First, a bit of background is in order. In the ‘70s and early ‘80s Goju-Shorei had what were known as bucket workouts, which occurred at least twice a year. Bucket workouts consisted of doing kicks, punches, katas and kumite until someone threw up in a bucket that was placed at the edge of the workout area. Towards the end of June, when these workouts would occur in Las Vegas, the air conditioning was turned off to add to the ambience. While I never visited the bucket, I came close numerous times, and I always rejoiced when one of my fellow sufferers made a successful trip to the container. These workouts were never looked forward to, but you always felt good about yourself afterwards for attending them. There were always good stories and memories that came out of these events; the time so-and-so did not make it to the bucket, but made it to the one drinking fountain instead, or another time when a visiting karateka walked out of the workout, declaring that the Goju-Shorei people were crazy – we got that a lot.

I feel that my bona fides are in place when it comes to hard, hot workouts. So when Dana Abbott, the owner of ActionFlex, invited me to come to Phoenix, in August, for a weekend of intense Chanbara training, I was not intimidated. I did start to get a little nervous when Dana called back twice to remind me to bring plenty of water and bananas. I became a bit more nervous when my wife reminded me that I was no longer a spring chicken, and that it had been several decades since I had participated in the gonzo workouts. Undaunted I purchased my plane ticket, packed my bags and set off for Death Valley….. I mean Phoenix.

Friday evening we met in an air-conditioned dojo in east Scottsdale where there was some light sparring and practice of basic kendo drills. I had been told not to bring any gear, as Mr. Abbott would furnish everything. Friday night there was no XL helmet for me so I contented myself with watching, and trying to memorize some of the moves that we would surely be using the next two days. I did bring my groin cup, which Jim Walz, the Executive Director of ActionFlex, assured me that I would not need. After the second person dropped from a shot to an unprotected groin, I started to cast wary looks in the direction of Mr. Walz.

Saturday would see record tying temperatures, and when I arrived at the training location at 8:30 A.M. it was already approaching 100. I would have been there earlier, but Mr. Walz drew me a map with the cross streets clearly mislabeled. I figured that this was some sort of test or screening process that Mr. Walz was giving me – if you don’t wear your cup or you can’t find the place, you can’t play.

I had brought several liters of water, but the other two students, Marc Johnson, 33, from Pittsburgh and Mike Nottingham, 28, from Abilene, Texas were each carrying a gallon of water. Oh, oh, I thought, they know something I don’t. We all met in the ActionFlex office and Mr. Abbott laid out the general plan for training. This included the fact that we would not be breaking for lunch, but would instead work straight through until 5:00. My two bananas were starting to look good. Water and bananas in hand – and a small worried frown on my forehead – we were led outside to what Mr. Abbott called the Polishing Room, which was next door to the office.

The Polishing Room: 15 feet by 18 feet. Not the workout area, the whole room was 15 feet by 18 feet. The floor was covered with a slightly rough textured rubber mat. The not-very-far-wall had the ActionFlex logo painted on it. The other walls were white, battered wallboard. The old acoustic tile ceiling had several pieces missing or broken. The ceiling lights, which mysteriously went off several times, gave out questionable illumination. Some equipment was stuck in the metal bars of the security windows, waiting to be used. This was obviously a place that was witness to a lot of hard workouts. I nervously looked around for a bucket.

At my dojo in Northern Nevada we do not have air conditioning because it does not get very hot that often. We do have, however, a heater because it can get real cold. So, following that logic, I assumed that the opposite would be true in Phoenix. That sounds reasonable doesn’t it? As we started to stretch out I kept thinking that the air conditioner should be kicking in anytime now. I heard a fan running somewhere and assumed that noise was a precursor to cooler air. Hmmm, I have got to quit assuming things. I made some off-handed comment about the lack of cooling to Mr. Abbott, and he started telling me about his 14 plus years in Japan where they trained without the benefit of conditioned air. OH, OH! This was really not good. I again glanced around for that bucket.

114 degrees is hot, I don’t care where you are. 114 degrees outside and God-knows what inside the Polishing Room is really, really hot. Mr. Abbott and Mr. Walz started running us through the striking drills, teaching us how to stand, how to move, sword position, hand position and how to strike. We next were taught the defending and countering techniques (waza). All of this learning was done by doing, no book learnin’ here. Around noon or so Mr. Walz directed us outside and started leading us in drills up and down the sidewalk. The sidewalk was in the shade, but still! After what seemed like a very long time we returned to the Polishing Room, which had warmed up even more. Mike said it felt like a fan blowing across Hell. Marc thought it was akin to working out in front of a very large hair dryer. I kept thinking that my fillings were going to melt. More drills, and now some sparring because Mr. Abbott was afraid that we might cool down too much to keep the muscles supple. The ActionFlex helmets are some of the best available; they fit snuggly, are padded all around and they protect the face very well. But they do not address the HOT issue at all. I found that I could breathe in them ok, but I had to be careful that I did not inhale the sweat that was running down my face in rivulets. The helmet part that protected the chin was a reservoir for my run-off. I have never been so hot; I was sweating harder than Bill Clinton at a Baptist convention, I was sweating harder than Mike Tyson at a spelling bee, my sweat was sweating. By 5:00 I didn’t think that I had ever been so tired; even my toenails were limp.

Saturday night the weatherman predicted that Sunday’s temperature would reach 116 – it did. I was trying to remember if my last will and testament was current. Sunday morning we were lazy, and did not start until 9:30. Mr. Abbott warmed us up with a ‘few’ drills. To Mr. Abbott you are warmed up when your gi top or t-shirt is soaking wet. Yoshi, from Tucson, came to add his support. Up and down the floor, up and down the floor. Yoshi was every bit as much the drill instructor as Mr. Abbott. ‘Men!’ ‘Kote!’ ‘Do!’ ‘Ashi!’ ‘Ski!’ ‘Hold your hand correctly!’ ‘Straighten your knee!’ ‘Stand straighter!’ My brain was starting to turn to mush.

Mr. Abbott had said that some local students would be showing up to beat on the three of us. And here they were, looking young, fresh and eyeing us with the look of juvenile lions sizing up their prey. So the sparring started, and I believe that we more than held our own. Of the three of us Marc was by far the best; he was beating on his opponents like an old rug. Mike was the strongest and he hit with great power that left your body tingling. I was the oldest by far, and the most tired, so I dealt with my opponents with trickery and deceit. More training, more sparring, and much more sweating. My 60 + year old body had finally had enough, and I sat down, leaning against the wall. One of our visitors opened the door in an attempt to catch any errant breeze that would cool off the room. Remember it was heading towards 116 degrees and it was considered cooler outside than inside. At 1:00 Mr. Abbott finally acknowledged that it was maybe a little too hot, and that maybe we should truncate the training today. His suggestion was seconded by several, “Amen”. I think that I nodded in agreement, but maybe I was just unable to keep my head up.

Summation: It was some of the best, and hardest training that I have had in a very long time. The instructors, Dana Abbott, Jim Walz and Yoshi, worked us, and themselves, very hard, but with an eye towards our safety. I was impressed by their attention to detail in teaching the correct movements, and the correct techniques. I brought away a lot of information and training ideas that will be incorporated into the Goju-Shorei Weapons System. Would I do it again? Probably not under the same conditions. Am I glad that I did it? Most definitely. I met some great people: my fellow trainees, Marc Johnson and Mike Nottinghamn; Dana Abbott, an extremely talented martial artist, and a fellow former sky-diver; Jim Walz, although he needs work on map drawing and safety equipment advice, is a great fighter and instructor; Yoshi, who laughed every time he hit you, and every time you hit him.

Now for some sad news. The Samurai Sports office has moved to a new location and any future training will be done in the comfort of a modern day dojo. My class was the last certification class to be tested by this furnace, this oven, this sweat filled, and fondly remembered Polishing Room.