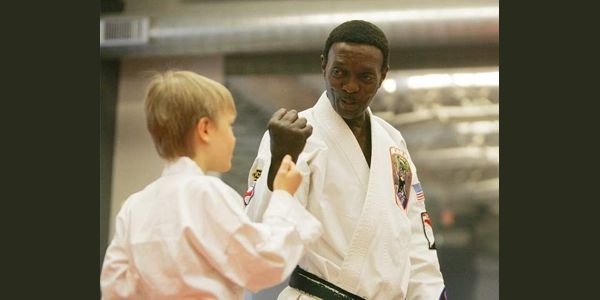 By Eric D. Lawrence – Detroit Free Press ~ Ever wonder if the crane kick at the end of “The Karate Kid” could win a fighting competition and put you in the good graces of the one you like?

The 62-year-old Southfield resident is well known in the world of martial arts. The head instructor of the Southfield Martial Arts Institute, Adams has won numerous fighting championships over the years and been inducted into the International Afro-American Sports Hall of Fame, among a host of other honors.

ANSWER: (Many years ago), I met a Japanese exchange student. He was in a recreation center. I seen him in there doing kicks and stuff.

Q: How long did it take you to become a grand master?

A: It takes about almost 35-40 years. Then you have to go before a board of 10th-degree black belts. You have to prove that you have the qualities of being a grand master.

Q: What’s the most popular fighting technique you teach, and why?

A: Our whole system consists of mixed martial arts. We never know what situation you’ll be in.

Q: Have you ever smashed through a stack of boards?

A: Oh yes, many times. Bricks, boards. I remember the first time I asked my instructor. I said, “When am I going to start breaking boards and bricks.” He looked at me and said, “When bricks and boards start attacking you on the street.”

Q: What’s the biggest misconception most people have about martial arts?

A: Everybody thinks you’ve got to break your hands, break bones. My kids get hurt more in baseball than in karate. It’s very safe.

A: Chuck Norris and I are very good friends. He made “The Octagon.” That was one of his real good movies. (But the) all-time great had to be (Bruce Lee’s) “Enter the Dragon.”
Q: How about “The Karate Kid”?

A: “The Karate Kid” was great. It has a lot of philosophy of what we really teach.

A: Bruce Lee, Chuck Norris, Steven Seagal, Jean-Claude Van Damme and David Carradine. But you didn’t have Jackie Chan or Jet Li. They do 90% of all their own stunts. I put them way up at the top of the list.

Q: What’s the most difficult martial art to learn?

A: There’s a lot of kung fu things in Shaolin that Americans can’t do because of their lifestyle. A lot of the things they do in kung fu we can’t do. The Shaolin monks live, eat, breathe karate. That’s all they do is meditate and train. We have jobs we have to go out and do.

Q: You’ve dedicated your life to martial arts training. How has it made you a better person?

A: Because I help so many people — thousands of kids. I put out more doctors, lawyers, engineers than many state institutions. (Many of these kids) have no confidence, no self-esteem. A lot of these kids come from broken homes. They need someone to be a mentor.