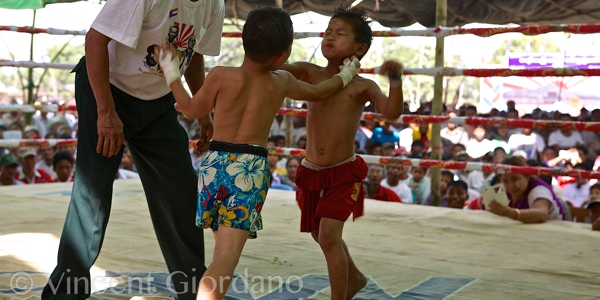 Burmese Lethwei, or Myanmar traditional boxing, is an ancient bare-knuckle fighting art that has survived in Myanmar despite decades of endless violence and governmental control. At times, this control threatened to wipe out Lethwei’s very existence, but the sport survived partly because rural communities throughout the country continually staged Lethwei tournaments during the celebrations and holidays that fill Myanmar’s calendar year. Including bare-knuckle matches as part of each celebration is a firmly embedded and accepted tradition within Myanmar. Central to these celebratory tournaments is the idea that, long ago, young boys engaged in Lethwei matches to display their fighting skill, courage and bravery. It was part of a rite of passage into adulthood.

The former military junta’s iron grip over the ethnically diverse country extended to violently suppressing the strong cultural identities and traditions of ethnic groups that opposed its control. Despite this, the rural communities continued to maintain the ancient traditions that were integral to their distinct cultural heritage. In the last few years, Myanmar has undergone a slow but radical transformation after five decades of dictatorship. The move toward democracy has eased the governmental control over various ethnic groups, but continued the battle against many others.

During the tournaments, Lethwei offers a chance for children and adults to display their fighting skills to their communities and earn some much-needed money. Children of the rural poor face numerous challenges and lack opportunity. Many families cannot afford to send their children to school. Over a third of children in Myanmar are said to be child laborers. Many will eventually work at construction sites, in mines, in agriculture or as house workers ¬– or worse, be forcibly drafted as child soldiers or sold into prostitution. Leaving their rural communities to fight for a living in Yangon, at large stage fights under bright lights, is now a realistic possibility and the hope of many. This was not always the case; the lack of full-scale support for Lethwei in the past often created constant struggles for fighters who wished to have a lengthy career. Today, the sport is growing and the media portrays proud Lethwei champions as successful symbols of Burmese strength and virility. 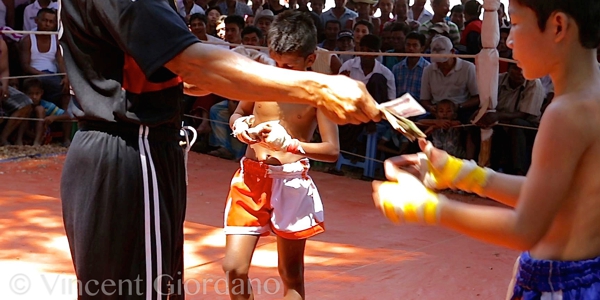 During holiday celebrations like Thingyan, children enthusiastically come out to fight at many village tournaments. Some will never compete outside of these rural competitions. Others will take every chance they can get to fight, become a professional fighter and help to support their families.

Today, some fathers still bring their sons to compete, even if the boys have minimal training. Both are following a tradition that has been passed down for generations, from father to son. In a sense, it is still a rite of passage, because the father is looking to see how much courage and fighting spirit his son will display during the match. Some fathers train their sons from birth to fight; they’re eager to know whether their boy has the skill to become a real fighter. If the boy does, the father will continue to cultivate that talent, year after year. However, many children will fight just for money to spend during the holiday. What better way to celebrate than to earn some money on their own, and spend it on themselves and their family?

In Thailand, many protest the use of children in Muay Thai because the youngsters fight professionally: full rules for five rounds, even for young children. Although Muay Thai has evolved into a modern ring sport from its earlier days as a brutal bare-knuckle art similar to Lethwei, it has come under constant fire for allowing children as young as seven to train full-time in training camps and to compete in professional fight arenas.

In rural communities in Myanmar, referees play a large role in the matches. Fights with children are sometimes not held to the usual three-minute round. The referees will allow the children to fight until they get tired, then give them a rest before letting them fight again. If one child doesn’t have the spirit to continue, the fight will be stopped. The refs controls the length of the children’s matches, and most keep them very short. In keeping with tradition, they’re looking to give the children an opportunity to display their fighting spirit and strength. In some tournaments, many children have extensive fight experience and will be paired with an opponent who has fought an equal number of fights. These bouts, though the fighters are young, often feature astonishingly high levels of skill. 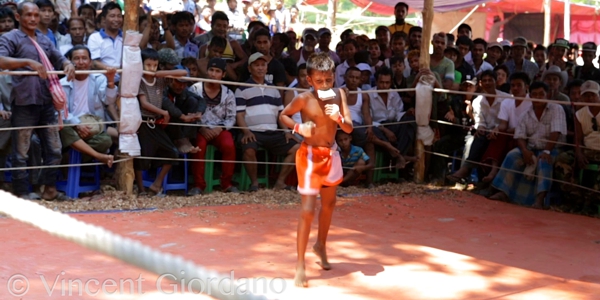 Professional Lethwei matches held in major arenas by promoters are categorized in various levels. The levels are a way to bring a young fighter through the ranks safely over time. A fighter begins at the amateur/beginner level, which is a three-round fight. Fights at the semi-professional level go four rounds. The professional fights are fought for a full five rounds. Children with talent and determination will eventually outgrow the opening three-round fights. If they continue to fight and win, they will move up to bigger fights and larger paydays.

Lethwei maintains the same professional rules for both children and adults, male or female. It’s a bare-knuckle fight with headbutts and throws allowed. The amateur ranks in most world combat sports require children to wear mandatory headgear and gloves at the national and international level. If Muay Thai has come under intense scrutiny for its acceptance of professional child fighters, it’s only a matter of time before the same type of criticism and ire is leveled at Lethwei.

Nevertheless, in rural communities Lethwei remains a cultural tradition and a sport where fighters display their pride, strength and courage during the lengthy holiday celebrations. In professional arenas, Lethwei has evolved from its status as a sport and cultural tradition to become a big business, which promoters hope to export to the international community.

The beauty is that Lethwei can be seen throughout the year in various ways. There are the celebratory rural holiday tournaments. Some fighters are courageous enough to compete in fight-for-the-flag tournaments that involve an endless final round, where the last man standing is the winner. Then there are professional, large-scale shows, often televised for all to see, held in major cities.

The hard life of the rural poor has always been a breeding ground for some of the greatest Lethwei fighters and champions. Allowing children to compete and show their courage is a custom that is integral to the sport. If you watch closely enough, you might see a father lift his young son over the ropes to give him a chance to show his dad his courage and bravery in the ring. In that fleeting moment, you glimpse an ancient tradition that remains in spirit, alive in the hearts of all those who have come before.

Visit our website devoted to Lethwei and the forthcoming documentary Born Warriors Movie: