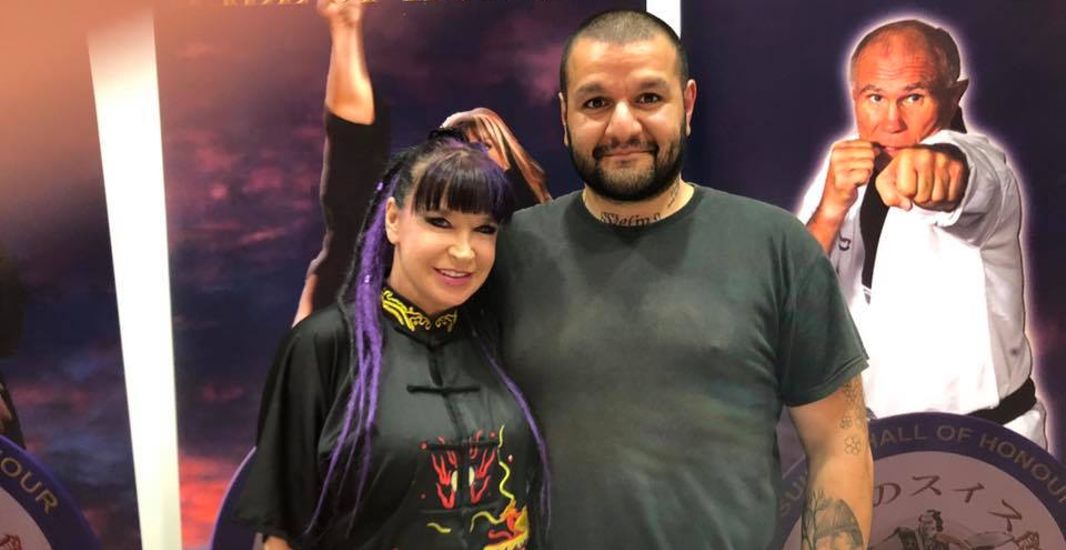 Ehsan Montaseri is the founder of the KOMAK self defense system.

Ehsan was born in Iran in 1984. In 1988, his family fled to Germany. His father was a professional wrestler in Iran and he wanted Ehsan to learn martial arts to connect Ehsan to the traditional values of martial arts. Ehsan began studying judo. He continued with wrestling, kick boxing, bare knuckle boxing and much more. In the end he stuck with krav maga, because his job as a bouncer required him to utilize techniques that worked well in real life situations and not in staged fights.

In 2008, Ehsan completed a ten-month training course at various schools in Israel. Krav maga became his life. He studied with many of the notable trainers of the original krav maga and learned as much as he could from them.

In 2009 Ehsan joined the german military “Bundeswehr” and began his training as a Feldwebel (sergeant) in the Heer (infantry). Here too, krav maga was his constant companion. However, after many years of teaching and using the techniques he learned, he felt that many of the krav maga trainers and associations were leaving the system too static – which is fine for commercial use, but not for practical application. As bouncer and soldier with operational experience he realized early that a fight is not static, but rather dynamic. He wanted something that recognizes this fact and focuses on the whole encounter, rather than a single attack. So he elvoved his techniques. His goal was to develop easily applicable methods that defend against many different types of attacks in a fluid fighting scenario.

So Ehsan Montaseri began to break down the most common attacks and concluded that no matter if you’re attacked with a knife, bat or fist punches the only thing that really matters is the direction from which the attack comes from, which are just four: frontal, side, upwards, downwards. After studying more than 1,000 hours of video footage of real life attacks he developed techniques that fend off attacks from those four directions, no matter what kind of attack it actually is. Considering scientific aspects, such as the OODA loop and the Hick‘s Law it is imperative to reduce the number of defense methods a student has to learn. Also important was to consider panic and stress in real life situations, so he kept in mind that something might go wrong and adapted the techniques accordingly. He’s calls this “stress resistance”: If you fail to apply roughly half of the method, the other half is still sufficient to keep the upper hand in combat.

Another cornerstone of the KOMAK system was to keep the system developing, constantly asking the question “What if?”. What if the perpetrator not only chokes, but suddenly hits you in the face? What if he has a knife hidden? What if he’s not alone?

“Self-defense is like a living organism. For it to survive, it must adapt to the constantly changing environmental influences”. Understanding this, Ehsan began to develop and teach self defence in his school in Germany in 2014, called “Krav Maga Pfaffenwinkel”.
Realizing that he strayed so far away from krav maga that the only thing left in common was the fundamental idea of Imi Lichtenfeld, he decided to give his system a new name. With the help of two coaches and friends, Jens Timm and Markus Mundo, they named the system by choosing a word that also symbolizes Ehasans origin and the goal of the system. Translated from Persian KOMAK means “help” or “helping”. The goal of the system is not just being able to survive, but also help others in need. Ehsan not only gives self-defense courses, he gives free courses for kindergartners, allows all helpers to train for free for one month, organizes an annual day of donations in favor of a charity for victims of violent crime in germany “Weisser Ring e.V.”, and has launched a wounded Warrior Program, in which previously deployed wounded soldiers get to participate in each seminar for a cost contribution of only $10. The same applies for the Thin Line Program he founded. In short, Ehsan wants to help and therefore KOMAK was the perfect name.

KOMAK is easy to learn, fluid and most importantly legal to use.

Ehsan Montaseri was invited by the Honorable Soke Heinz W. Köhnen to the 6th Swiss Martial Arts Hall of Honor on September 21, 2019 where by fellow martial artists from all around the world, including Cynthia Rothrock, Daisy Lang, Bill “Superfoot” Wallace, and Samuel Kwok.