Soke Grandmaster Frederick Peterson Jr. is the founder of American Tai-Shi Jitsu Self Defense which is a combination of Jui-Jitsu, Judo, Gung Fu and Filipino Escrima. 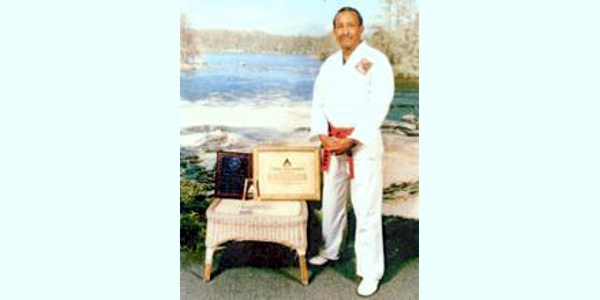 Chronological History of Qualifications and Experiences

1943 – Enlisted in the U. S. Navy. There was trained in the art of Jagaro Kano Ju-Jitsu (Judo) by the “First Marine Raiders”, who were trained by Master James Metose. Served in the Solomon Islands such as, Guadal Canal, Invasion of Bougainville and a few of us were sent to the Philippine Islands.

1945 -1965 – Became the Lightweight Champion of the Americal Division Smokers in the South Pacific, (Boxing). Served on ten (10) naval ships and four (4) naval air stations, shore patrol and prisoner chaser over six (6) years, all during 21 years of military service. Played Judo at most of these naval assignments.

1967 – Started officiating at open and traditional tournaments all over the USA from San Francisco to New York. Associations were AAU, USAKF, USAKA and USKA. Holds the distinction of being the center official along with four (4) others, who could not break a tie during the Kata Performances (three times each) of Sifu George Chung and Sifu Stewart Quan. Both received Grand Championship awards. This was held in San Francisco.

1971 – Combined all training and experience over the years and founded Tai-Chi Jitsu Self Defense. Opened and taught at my first academy, Salvation Army, Building in Compton, CA.

Frederick Peterson Jr. has been a Boxing official in the Amateur Association (USA Boxing), since 1967 having officiated such pro, fighters and champions as Oscar de la Hoya, Sugar Shane Mosely, Fernando Vargas and brother. Larry Mosely and brother, Young Macho Comacho and many others as Amateurs even during several USA Olympic trails, Colorado (2), Lake Placid, New York (2), Kansas (2). Retired in 1999.

Frederick Peterson Jr. has referred and judged Amateur Kick Boxing for a few years and still at present state of California: Timekeeper for Professional Boxing.

Frederick Peterson Jr. tutored and or has been a part of the promotion of the following Black Belts:

Frederick Peterson Jr. has been inducted with top honors in five (5) southern California Martial Arts Halls of Fame throughout the years of 1998 – 2000.

Certified to “Soke” when inducted into the World International Global Hall of Fame in San Diego, California under Dr. Soto in 1999.

From 1987 through 1991 Frederick Peterson Jr. was Grand Champion in Masters Point Fighting (Kumite).

Frederick Peterson Jr. has referred, judged, and worked as a timekeeper for the California State Athletic Commission for both Muay Thai and Kickboxing events.