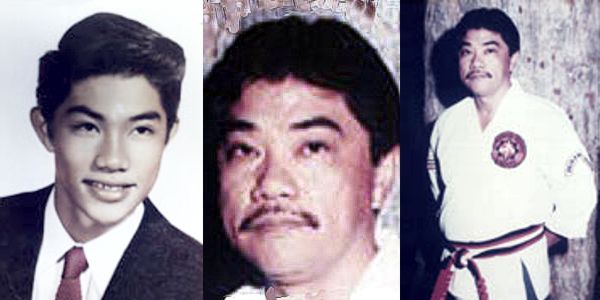 Mike De La Vega (known simply as “Sensei Mike” by his students) is the founder of Hawaii Shin-Kan Okinawan Kempo and has been teaching Okinawan Kempo since 1959. Sensei Mike is a Hachi-dan, which is the highest rating in Ryu-Kyu (Okinawan) Kempo. Sensei Mike is a relative of Chojun Miyagi, founder of Gojo-Ryu, as told to him by his immigrant relatives from Okinawa. Mike De La Vega started learning the Okinawan Martial arts as a small boy in the 1940’s by his immigrant grandparents from Okinawa. Then later was introduced and recommended to learn the teachings, philosophies and healing techniques of Okinawan Kempo by his grand parents close friend, an immigrant priest and master of Ryu-Kyu (Okinawan) Kempo on a one on one basis.In the 1940’s and 1950’s Mike De La Vega grew up in the tough Kalihi-Palama area. During his youth, Sensei Mike was often confronted by trouble maker gangs but due to his martial art teachings, he would try to convince the trouble makers to be good instead. Mike De La Vega would try to turn the negative situation into a positive situation via words or he would just do a hold or throw without striking them if possible. In time, Mike De La Vega became well liked by the gangs in Kalihi and at Farrington High School.

At the Palama Settlement he learned swimming, football and basketball. He played football as a 1st string half back and defensive back for the championship Palama Settlement Barefoot Football team under head coach Knuckles Kaneshiro and assist coach Eddie Hamada while he was only a 10th grader (15 years of age) and he was the youngest player in the Hawaii Senior Barefoot Football League. Most districts in Honolulu had a team and one of the teams in the league was the Oahu prison team comprised of prison guards and inmates. The average age in the league was 24 – 29 years of age and the players were ex-high school or college players. Sensei Mike was only 5′ 8″ and 120 lbs, but despite his age and size, he was never injured. When asked about this, he would say “didn’t I teach you that nothing is impossible if you have faith which is in the Word of God?”

During the 60’s, Sensei Mike joined the US Military and became a Long Range Reconnaissance Officer, specializing in Air-Ground Reconnaissance. During the Viet Nam War, Mike De La Vega spent long periods of time by himself or with a small group of men in the jungles of enemy territory. He was recognized for his combat skills and was asked by the Brigadier General to open a school in the military base gym to teach any military personnel willing to learn. In fact, Sensei Mike’s first school was teaching special operations units hand-to-hand and weapons combat techniques. During his military career, Sensei Mike did reconnaissance in Viet Nam, the Cuban Crisis, the Berlin Wall and the Panama Crisis and his unit received their orders directly from the main command center at Langley AFB.

When Mike De La Vega returned to Hawaii, he swore that he would never teach anyone what he learned in combat, but he trained everyday and prayed all the time. One day, while meditating in an empty church in Kalihi, he heard God speak to him and was told to open his school. So in 1979, Mike De La Vega had the first official class for the Hawaii Shin Kan Okinawan Kempo Dojo at Kamehameha Park in Kalihi.

Mike De La Vega developed and taught four Ryu-Kyu (Okinawan) Kempo katas; three Chanan Katas (peaceful mind) and one Naihanchi Kata (attainment of goal or satori within oneself). Katas are up to 250 moves as short katas don’t offer the same results as long katas as its goal is to develop the mind, body and spirit into one person thr0ugh lengthy moves within each kata. He also developed the 32 Combinations and taught the Eight Diagram (footwork exercise) to his students to help develop natural rhythm in multiple moves or flurries. The katas and 32 combinations are also used for all types of weapons. Sensei Mike says that if you master these 4 katas, 32 combinations, the 8 diagrams and you study the strike points of any weapon you can create any weapon kata and you will know how to use it properly in combative situations.

Due to his engineering background, Mike De La Vega developed and has taught his students the zero-hundred-zero technique the half-a-second technique, relaxation is power concept, the eye of a hurricane concept, mass X velocity = power concept, weight training techniques for martial artists and other techniques and concepts to further develop the student to a higher plane.

His teachings also have many different throws (hip throw, swivel throw, irimi-nage, koto-nage, tomo-nage, needle into the sea, water fall, etc.) and also different holds to suppress attacker without striking the attacker and nerve or vital point centers. All throws are done full speed on concrete floors during all demonstrations in various shopping centers in Hawaii.

Some of his students in his Hawaii dojo were in the University of Hawaii football team, the Honolulu Police Academy policemen and different black belts from Japan visiting Hawaii.

He has also helped one of his students, who thought they couldn’t do it, become a Hawaii Heavyweight Golden Glove Champion, and another student (his brother) win one of Japan’s tournaments in Japan. Another student became a high school weight lifting champion for McKinley High School.

A Japanese Newspaper also featured Mike De La Vega in a special edition of The Overview of Martial Artists in Hawaii.

Mike De La Vega believes that it is very important to teach the Word of God over the physical aspects of the martial art, as the Power of God will change, guide, improve the student and then make the student more powerful in life which the physical part of the martial art can’t do. Mike De La Vega always took time in his practices to teach his students the Word of God and lead students to Jesus Christ and have them feel the Power of God (Holy Spirit) inside of them via positive affirmations in line with the Word of God. His teachings focused on development of the mind, body & spirit thru positive mental attitude (to be like Jesus Christ all the time).

Because of Sensei Mike’s teachings in God’s Word many students, who thought that they couldn’t break eight bricks did so. Besides being proficient in the martial arts, his students also became successful people in business and relationships, and went on to become doctors, engineers, lawyers and successful business professionals, when they initially thought they couldn’t do it because of a lack of money or ability. Sensei Mike always prayed for his students to be successful and he especially likes to teach students (especially kids) who are under welfare, as he sees this as a great opportunity to teach them God’s Word so they can become successful in life.

Mike De La Vega has also displayed the Healing Power of God in his practices, as he has changed many students from negative to positive people, healed students in practice from breathing & asthma problems, healed arms that couldn’t lift up, healed knees, healed flu’s & colds, healed students that were under medication of concentration illness, and other physical & mental problems. When asked who healed them, his response has always been that he didn’t do anything, as it was God who healed them and them having faith in God that God would do it he says “I only did what God told me to do.”

At practices Mike De La Vega would demonstrate a flurry technique with a throw and because it was fast, his instructors and/or students would ask him what he did he would answer “I don’t know, it just came out of me and you should learn to do the same too as it should come out of a person without thinking.”

Sensei Mike has never charged his students any fees to learn Okinawan Kempo, as he was taught to teach people with his heart and not for any type of compensation.

Sensei Mike has given back to the community by being a coach for Kapahulu Raiders pop Warner team and coached University of Hawaii High School basketball team and was an assistant coach for Pac-5 High School football team with no monetary compensation.

Today, Mike De La Vega lives in Hawaii with his wife and children and even has grandchildren. He is a retired consultant computer systems engineer and has a mortgage loan business in Hawaii. Recently, Sensei Mike developed a stock trading software system for his own use and has emailed it to anyone who is interested in learning about trading stock options.

Sensei Mike says to everyone “God bless you and your families with good health, prosperity, joy, peace and all the wonderful blessings of God”.