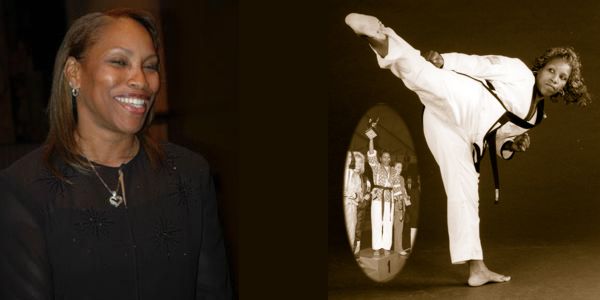 Margret Beasley earned seven Golden Greek Awards from Texas, the highest number ever awarded since the death of Demetrius “The Golden Greek” Havanas in a tragic plane crash in 1981. Texas would award the best over all competitor “The Golden Greek Award” MVP for Kata and fighting to her opponent in this classic picture, the great Linda Denley, who is one of the best Black Belt point fighters to ever to wear a Gi.

Critics around the world agree Linda Denley can fight!

Inducted into the Black Belt Magazine Hall of Fame, Master Linda Denley has been on every professional karate team that existed before her retirement and has won hundreds of national titles all over the world!

My favorite story of Linda Denley is a story I have never made public before. It was 1979 and I have one of the earliest fight clubs in Houston, Texas. I was hanging out with a crowd that liked to fight tournaments and we had a 1000 square foot area I called a Dojo. On Thursday nights I would invite all the national players in Houston to spar and train. Great fighters would show up, Ernie “Radar” Smith, Steve Fotenote, Louie Valquez, Vernon Smith, Jimmy “Gato”Tabares, George”Lighting “Sorrell, Kevin Scott, Kevin Roy, and those Tae Kwon Do masters, ninjas, and other character’s of imagination.

Linda would drive forty miles across Houston,Texas one way, and she would be the only lady to show up to fight with the caliber of fighters I would draw. We would throw our names in a hat and draw, fight for three minutes, liston to some great coaching, and do it all again and again. It was tune ups for most of us, but for some that showed up, it was a nightmare!

One Thursday night I had a real jerk show up. He said he was a seventh Degree Black Belt in something and didn’t want to fight because he didn’t want to hurt anyone with his ability. He refused to wear safety gear and just wrapped his hands, no safety feet either, so finally I persuaded him to put his name in the hat with all the other fighters, I mixed them up and the names were drawn. As the fighters matched up, Ms. Denley had drawn “The Jerk”. He went into a fit, screaming that he would not fight a girl or woman or whatever, he continue to babble on about how we were lucky to even have him here, and that it was a setup to force him to fight some woman. Man, he was full of it!

A couple of fights went by and then “The Jerk” said “what’s going on, are you going to let me show you guys how to fight or what?” I guess he got up some courage, but what was exciting to all of us was that he had no idea who Ms. Linda Denley was in Karate, or the legend she was becoming, not just in Texas but the world.

I was running the center, Radar was coaching Ms. Denley, “The Jerk” would not put safety gear on, so I made him wear 12 oz boxing gloves, but no safety feet. When the two came to the line, he wouldn’t look at Ms. Denley and would not shake her hand or touch her glove. I think this upset Ms. Denley most, no respect! “The Jerk” was rude and he was no Shichidan, maybe not even a real Black Belt. What happened in the next five minutes was beautiful, and the first time I ever saw a lady beat up a man.

Bam!, Bam!, Side Kick, fake, step across sidekick, right hand, left hand, Hook kick out of nowhere, pop, back fist, side kick, fake, boom, boom, fake move, stick, Ms. Linda Denley was tearing this flake apart, three minutes had almost expired and I was watching the time, when Ms. Denley, winked at me and shook her head, looking at my watch, meaning she wanted more time with this fresh piece of meat with no respect, so I let the time go by the three minute mark!

Boom!, CRACK!, overhead ridge hand to the bridge of the nose, first signs of blood, she beat on him for three more minutes.

When time was called, “The Jerk” wanted to leave without bowing out to Ms. Denley. Of course, I made him bow out, gave him a band aid as he was bleeding from the ear, nose and mouth, and had my secretary give him a waiver to sign! “The Jerk” signed it, left, and we never saw him again.

It’s seventeen years and I am the State Arbitrator for the National Black Belt League. We are in Galveston, Texas, at World Champion Ishmael Robles’ National Black Belt League Event, and it is the finals. Ms. Denley is fighting the light weight winner for the Ladies Grand. The Center Judge says “Go” a good steady fight ensues, when Denley’s opponent stops the fight and whispers something to Ms. Denley. Next, all Hell breaks loose. Ms. Denley tears into the Black Belt like a lawnmower on rocket fuel, beats her into the corner of the ring, finishes with a spin kick to the head and the judges pull Ms. Denley off her opponent.

Of course the light weight’s corner wanted me to disqualify Ms. Denley, but there was no blood, just a good old fashion beating, a little aggressive, but still good solid fighting and no disqualification! Everything settles down and slowly everybody leaves. Finally Ms. Denley comes out of the locker room, I was waiting, as I had to know what had been said by that Black Belt to cause Ms. Denley’s explosion. She looked at me and smiled and said “it’s not important, thanks for not disqualifying me.” A few years later, we are attending another Black Belt function and I cornered her again. This time she tells me what the woman said. “She stops the fight and whispers in my ear, “I THINK YOU ARE HITTING ME TO HARD!” These are surely not the words you say to the number one lady fighter in the country, lol!

Ms. Linda Denley and I have been friends and comrades a long, long time. I was at her school in Houston recently and she was working, teaching, and sharing with her students. One of the parents mention all her Black Belts students pictures on the wall. When she noticed my picture she said, “Your not one of her Black Belts!” I said, “No, I am one of her students!”

Gary Lee - March 3, 2011
We use cookies to ensure that we give you the best experience on our website. If you continue to use this site we will assume that you are happy with it.OkRead more